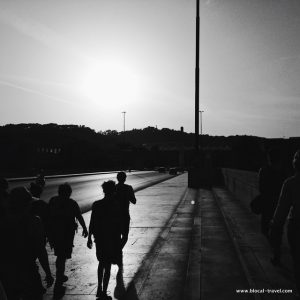 “Me and you eating candies”

Roman lovers’ words echoed in the air, then followed the river towards the city centre. We found them on the marbles of Ponte Milvio -a bridge in northern Rome that is the epitome of teenagers’ passion and handwritten declarations of love. Then we set them free under the vault of the bridge.

“I would have bet upon us.”

“I love your inner beauty.” 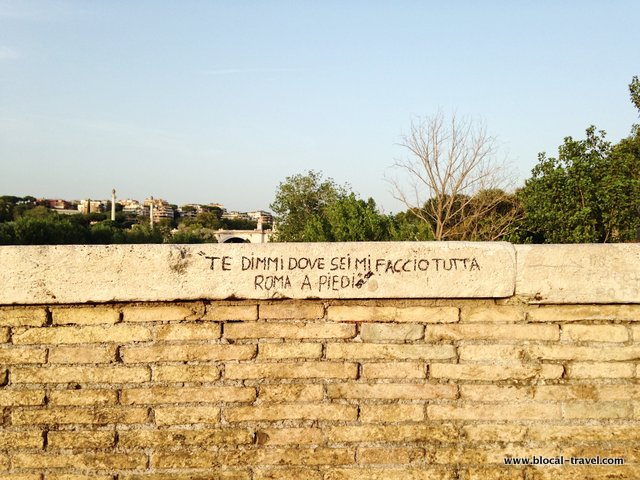 Between uncut grass, condoms, glass shards and dismantled clothes, we faced the wall and declared love epigraphs. Then waited to hear the passionate messages coming from the opposite side of the bridge, which were delivered by the other half of the group. 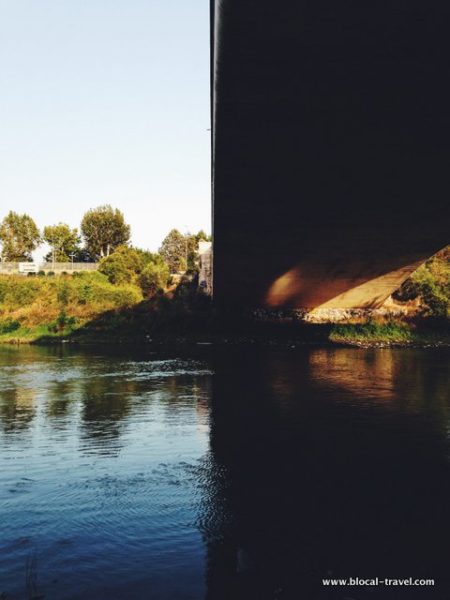 Love rhymes went back and forth connecting the two different sides of the river. The side I was on was rough, smelly and neglected. To reach it, we had to walk in between bamboo, dry branches and a lot of waste. 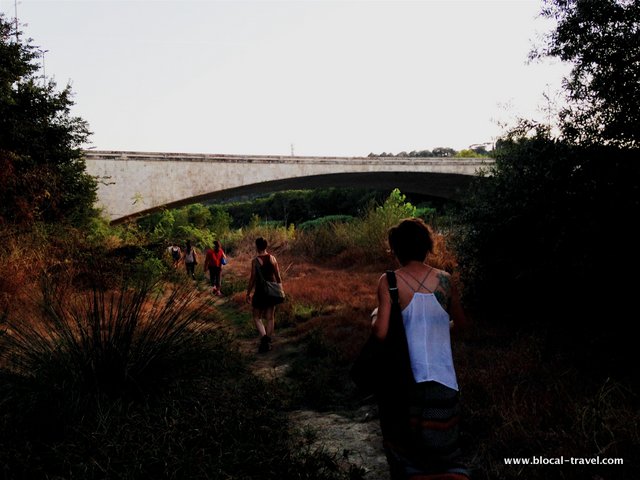 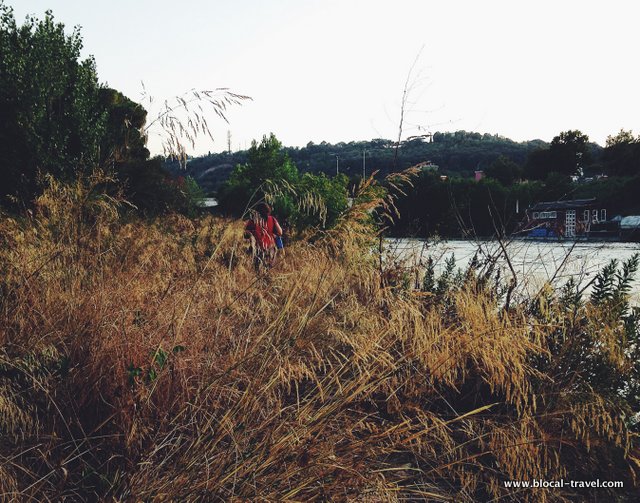 Conversely, the opposite embankment has even a name, Via Caporati, and is intended for bikers, runners and couples strolling hand-in-hand. 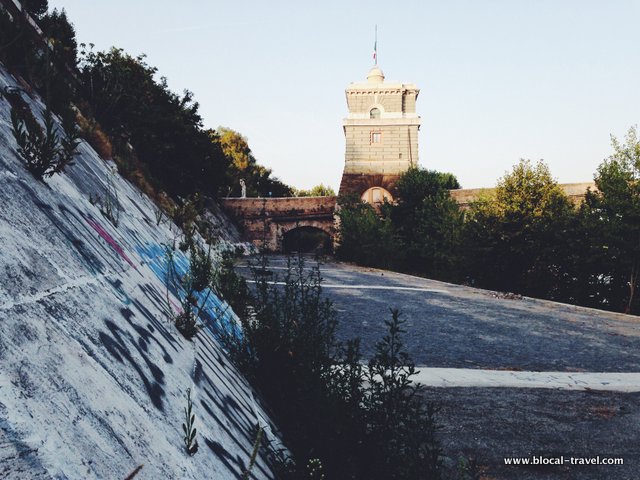 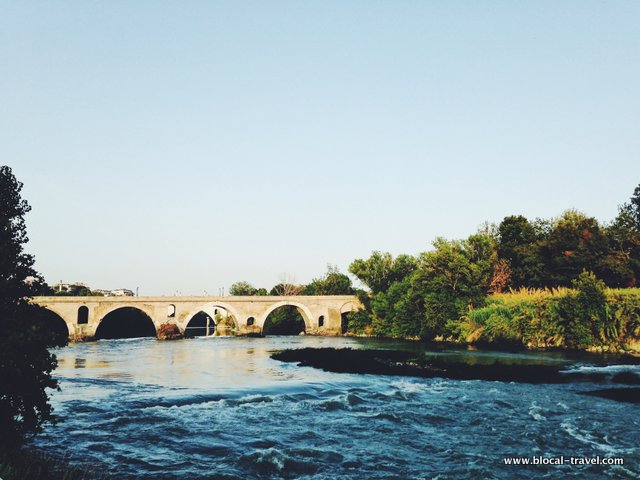 Rome, split apart by the river, the opposing sides of which are just one of the many metaphors of the duality of the city. 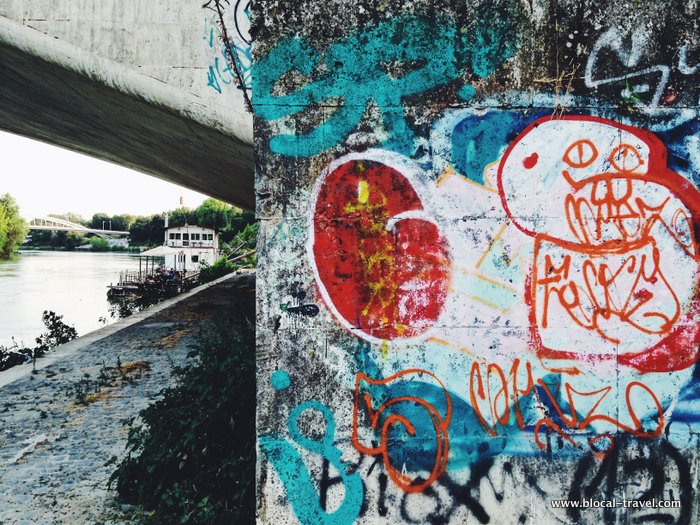 Rome, split apart by the summer, which punctually kicks off a parallel city. A city where cicadas are louder than engines, the air smells of pine trees rather than smog and everything looks the same. Except it’s empty. 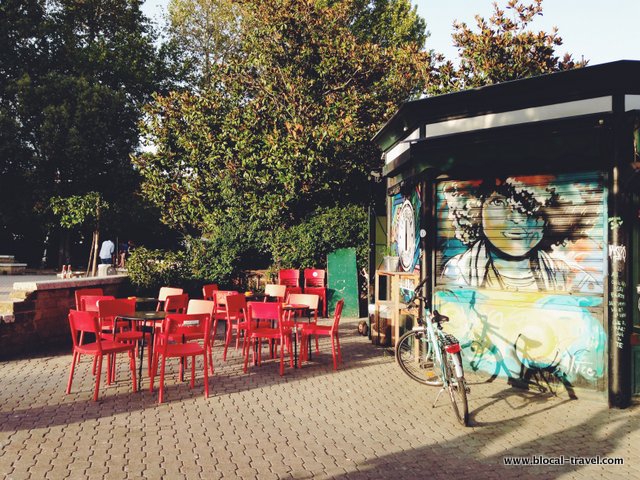 And so, white-collar neighbourhoods like Prati or Flaminio, which we had just crossed, remain confused. Puzzled like babies who have broken their toys and stare at a no-purpose limbo where everything is possible.

Rome, split apart by its self-contradictions.

Rome, whose poshest neighbourhood, Parioli, sits next to an abandoned stadium inhabited by gypsies.

Yes, I again went inside the abandoned Stadio Flaminio. 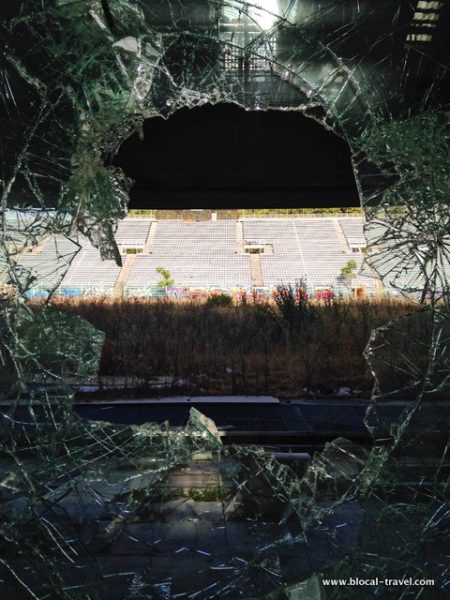 However, unlike my previous urban exploration adventure, the stadium felt alive on my second visit. Or better, this time I lived the place.

With no camera between the empty bleacher and me, I entered the overgrown field, walked through the dry grass, felt the empty belly of the whale and even laid on it. I could feel the grass against my skin, hear the wind caressing the empty seats and feel the gaze of the public. That is, those of the group who stayed upstairs, on the bleachers, playing the observers. 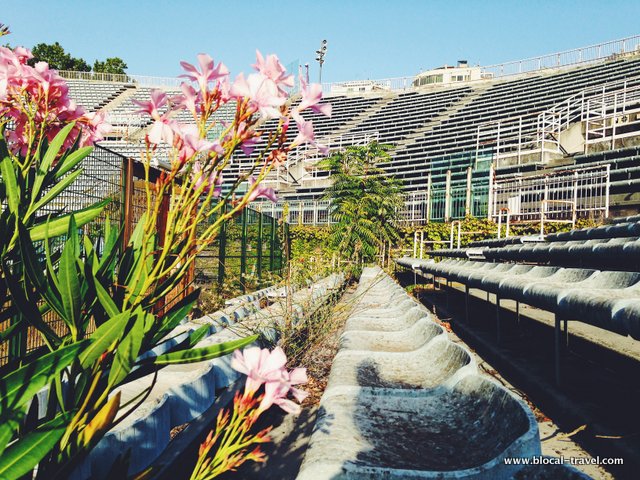 Conversely, I did play the observer later on, during our second ‘experiment’. It took place inside yet another stadium, Stadio dei Marmi. 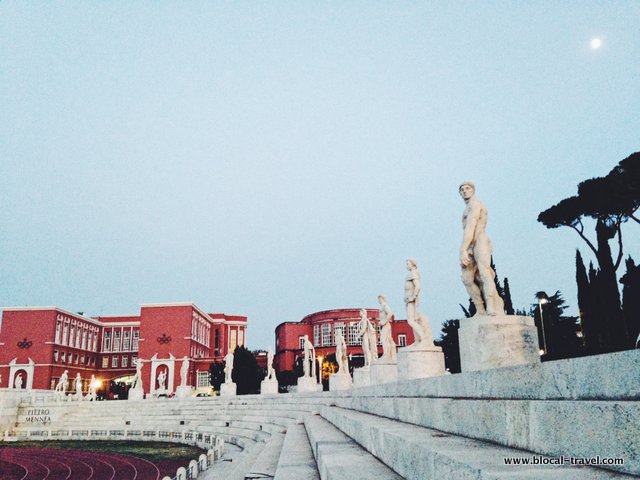 Built for athletics during the 1920s, it is still peppered with uncomfortable engravings, such as “Mussolini Dux” and other tributes to the Fascist Regime. This stadium is a theatrical setting in itself, its white marble statues dotting the red tracks which encircle surprisingly green grass. The fascist virility of the statues was nicely contradicted as the setting sun bathed them in pink. 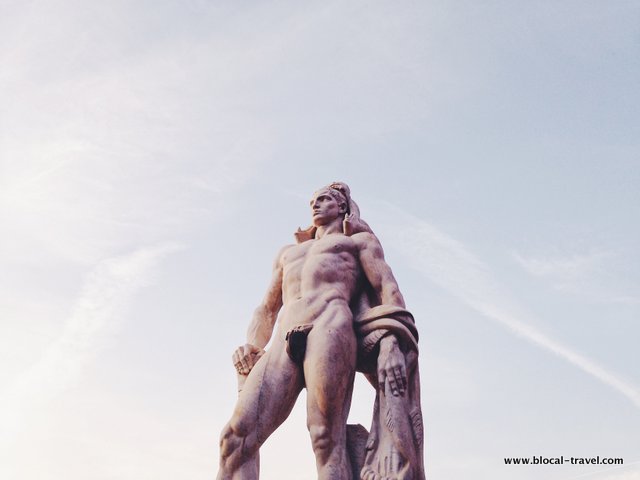 I sat on some marble stairs and contemplated our experiment. That is, half of the group moving towards the other half across the field –setting up the dichotomy between those who observe and those who act. There seemed to be more movement in my fellow explorers’ slow, mindful steps than in the laborious running of the athletes who were working out all around them. Somehow, our presence was altering the space in a more incisive way. 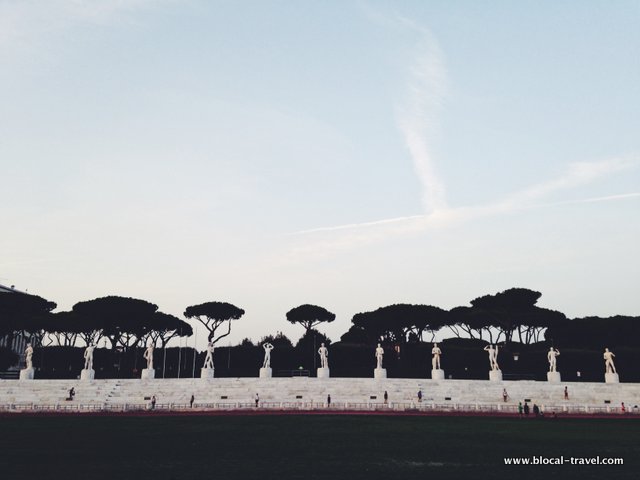 Next, we found another building of power: the Farnesina, a rationalist building intended to house the National Fascist Party. It is now the headquarters of the Italian Ministry of Foreign Affairs. As we walked around its straight lines and squared-off shapes against a surreal soundtrack of mazurka music, a big moon rose above Rome’s celebrative marbles turning everything silver.

As for us, it was time to go down a rabbit hole to discover yet another dimension of the city. While Valerio and Leonardo, the organizers of Mamma Roma‘s walks, were listing their recommendations –be silent, don’t walk too close to the person in front, keep an eye on the person behind you- my mind went back to the time when we crossed a swamp at night in the area of Tor di Valle, which is exactly the kind of experience you can expect during Mamma Roma’s urban explorations.

We were about to enter a 238-hectare wood, Parco di Monte Mario, without flashlights and only the moon to light our path. As soon as we entered the wood, leaving all things urban behind us, nature prevailed over our anthropocentrism.

Cicadas, which had been by our sides for the whole afternoon, gave way to crickets. The noise of engines became barely audible in the distance, until it finally vanished. 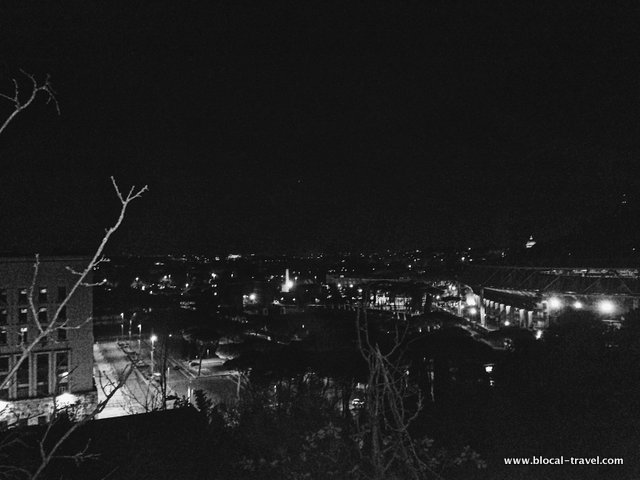 We walked wrapped in a silence made up of many little noises, such as the wind caressing the leaves or our steps. Steps which were surprisingly synchronised, despite the ample space between us. The beat we shared was the only real ground to cling on to. Without the usual reference points of the city, we didn’t know if we were walking towards the centre, the river, or towards the nothing that is western Rome.

Suddenly, I could see lights, as if fairies had set up a party in the wood and were waiting for us. As we walked closer, they even put on some swing music. 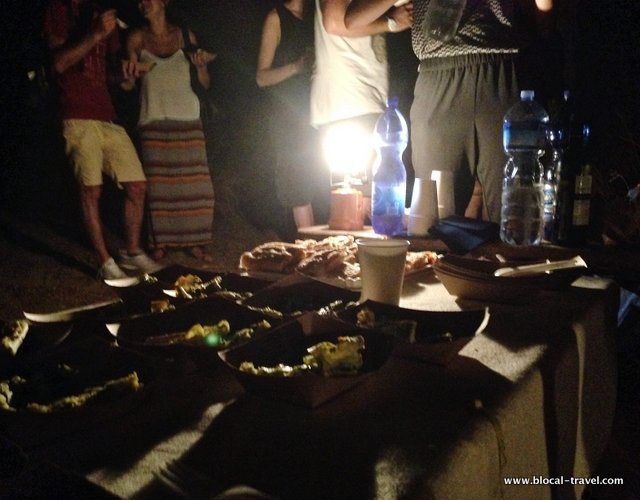 I spent the rest of the night contemplating my shadow dancing on the leafy branches of the Roman pines. They are the undisputed guardians of this secret spot hidden in the Monte Mario wood.

Prologue: I walked back home with a guy who had just moved to Rome from northern Italy. He was eager to discover the ‘city of the news’, as he called it, since he had always seen Rome in the background of TV news. Not the city of cinema (that would be New York, he insisted), but the ‘city of the news’, which provides, depressingly, a background to politicians talking on TV. He was amazed that the ‘city behind the politicians’ also has abandoned stadiums, hidden woods to dance the night out in and love messages written on its bridges. But, most of all, he was impressed by what the ‘city of the news’ doesn’t have: a fucking place to throw garbage away. And so we walked from Monte Mario to my flat with a bag full of paper that was meant to be thrown away…to the delight of the seagulls, the new dominators of Rome! 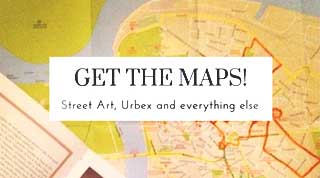 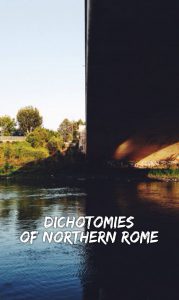 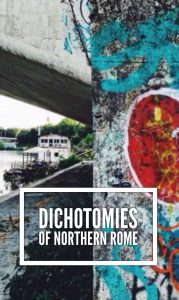