Trip to Belgrade: my first day in the funky capital of Serbia

Finally today the over-planned (and over-dreamed!) trip to Belgrade has begun! As soon as the hostess addressed to me in serbian, I felt glad to be on that plane flying to a new balkan adventure, ready to step into this town I’ve been reading so much about during last month and excited to finally switch from Belgrade city map to a real 3D Belgrade experience. Such a big excitement lasted until I got off the airport and tried to withdraw some serbian dinars to get a cab, as any ATM of the airport was spitting out my card and saying it wasn’t readable: shit!

After changing those few euros I somehow had in my wallet (those euros I forgot to leave at home, as intended), I took the cheapest bus to the city and walked my way to Dorcol (with a suitcase and a backpack), luckily without getting lost or making the way longer ‘cause I spent last month with Belgrade city map wide open on my desktop, so at least I had a very good sense of direction.
So, partly for understanding serbian language (and –even more important- to get other people understand me and my bank problem which even I didn’t understand in the first place), party because I spent last month studying intensively Belgrade city map, I managed to survive prancing from one bank to another, moving deftly (“like a local”, as I was proudly picturing myself) throughout underpasses, minor alleys and shortcuts, ending up spending one hour of my first day in Belgrade waiting in the line at the bank (..but -it goes without saying- there is nothing more local than waiting in the line at the bank! ;-) ).

With some serbian dinars in my wallet, I felt more relaxed and started wandering around the students district, the area near the university where I caught the youngest and cheerful soul of the town and I felt so cheerful myself that, hearing some balkan music coming out of a window of Captain Miša Palace (the University main building), I sneaked in and had the chance to assist to a balkan choir performance.

After the concert, I went on Višnjiceva and stopped for a coffee at Supermarket, the concept store I was looking forward to visit. This store is an amazing open-space where you can find clothes, design objects, a cafeteria and two restaurants: with its hundreds of light bulbs hanging from the ceiling and its industrial charme it is a truly hipsters’ meccah.

That’s what, so far, I love about Belgrade: it seems to be where the most talented interior designers live! Any place, from restaurants to stores, has the most amazing furniture and a very personal style; here a few pictures of my favourite ones:
In Belgrade, you can even buy vegetables in style!

Another place with amazing interiors is the Federal Association of Globe-Trotter: its unique pieces of furniture have been brought there by the associates from all over the world. Here I stopped for a green tea and to have a look at the plan of the night. 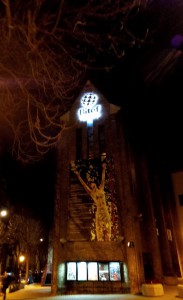 After admiring the building of the Bitef Theatre (which -from 1967- is the venue of the Belgrade International Theatre Festival) I went to Skadarlija to find a kafana (tavern) to eat, but they all seemed too touristic to me so I ended up eating some serbian street food at Loki, near my B&B, to which I soon came back to relax and write.

What to see in Belgrade in 5 days: my itinerary to discover a rising underground culture Mecca

Belgrade off the beaten path: travel diary of my 2nd day in Belgrade

One day in Belgrade: my 48 overwhelming hours...