These days in Belgrade I’m facing the travel blogger dilemma: the trade-off between writing amazing travel reviews about all wonderful things this town has to offer and staying out all day actually enjoying the town. I’m pretty concerned about the fact that, when I will be back to my real life in R(H)ome, I won’t have the time to write and edit all the pictures I’m taking, but of course I don’t want to spend all my holiday at the hostel in front of my laptop, so I’ve decided that, right now, I will publish just a Top 5 of what I’ve seen during the last 3 days in Belgrade, but I promise in the future you will see more Belgrade tags on this blog, as soon as I come back (R)Home!

But let’s start from what I loved the most during the last 3 days:

When I was planning my Belgrade trip and asking locals where to find street art in Belgrade, the answer was always the same: EVERYWHERE. I couldn’t wait to be in such a creative and colourful town! Recently Belgrade municipality undertook an urban regeneration process through street art and several international big names have been invited to redecorate a town made of grey, massive socialist buildings. But I will keep big names for another post (eheheh!), and now I will share a street art gallery about the 3 most colourful neighbourhoods in Belgrade:

Thanks to the proximity to the river Sava, Savamala was an industrial area made of docks and warehouses. Now it’s the most dynamic and creative district in Belgrade and –of course- the most colourful neighbourhood, with many street art works, especially around the KC Grad’s block (an amazing cultural center, btw).

Vračar is a nice residential neighborhood not very far away from the town centre, which is definitely worth a visit, at least for its street art. I found the majority of these street art works by entering narrow pedestrian alleys and courtyards, so don’t hesitate and…hunt!

I will keep it short: this pedestrian alley connecting Trg Nikole Pašića with Nušićeva is also known as the “Street Art Gallery”, as it is fully covered with wonderful graffiti. I just regret that, by the time I arrived there, it was already quite dark and so my pictures definitely don’t do justice to the urban atmosphere of the pasaž.
— For more street art pictures, go to the Off-Beat Belgrade post

Another great graffiti hunting venue is the BIGZ building, the former headquarters of the “National Printing Institution of Yugoslavia” built in 1940 and then abandoned during the ‘90s. Now it hosts many creative offices ranging from music production to design and from visual art to circus performances. At the 7th and 8th floors there are many clubs, from jazz to rock and reggae, and the view from the terrace at the very last floor is breath-taking!  At the beginning it scared the shit out of me to walk inside its abandoned and kind of creepy hallways, I was even too afraid to take the elevator and so I limped step by step my way up to the last floor (I’ve got a bad tendinitis in these days), but it was worthwhile ‘cause this place is really really really amazing, if you are in Belgrade you can’t miss it! Here are a few pics from the Jazz Club Čekaonica:
[EDIT (summer 2014): this awesome place is now closed and sadly it will be demolished soon].

Tabor restaurant is quite away from the city center, but it is definitely worth the trip, as the food here is divine. We ordered dry plums wrapped in bacon, a traditional dish in which liver is the main ingredient, potatoes wrapped in bacon with cream, grilled mushrooms and grilled red peppers. Everything was very tasty and I enjoyed the atmosphere of the restaurant too, with Serbian traditional music and people dancing all around!

WITH THE COUCHSURFING GROUP “JINGLE BELGRADE”

On Saturday 28th I joined the Zemun town walk organized by local couchsurfers, the first of many appointments lasting until 1st of January and aimed to welcome people coming from outside Belgrade, show them the main attractions of the town and most of all have fun all together. In my experience, this is the first time that hosts are such welcoming and well organized,  the walk was very pleasant and we were around 30 people from different countries. Locals brought us around Zemun, a nice, ancient hamlet on the Danube river that has been dominated by different cultures during its long history and became part of Belgrade municipality only in 1934. During the walk we saw the modern ruins of a military building bombed and then abandoned, the park with its academic institutions and churches, the old synagogue, the orthodox church, the characteristic little houses, the opera theatre, the “gentlemen street” (a very elegant pedestrian street with many shops), an abandoned bells’ workshop and, of course, the amazing view from the Millennium Tower, the landmark of Zemun. According to our local guides, Zemun is cozy and cooler than downtown Belgrade, as it is less chaotic and crowded, with a beautiful quay along the Danube river. 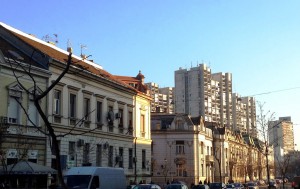 *how performers of Balkan Brass Band are called
Known worldwide thanks to the Bosnian musician Goran Bregović, the Balkan Brass Band style actually originates from Serbia in the 19th century, when trumpeters in the army transposed folk music during harsh times. In Belgrade, you can hear their trumpets from almost every corner of the town and in each and every kafana. And I’m not talking about the fake touristy version of it or some buskers on the main commercial street; in Belgrade you can enjoy the true Balkan beat in each moment of the day. Just be aware it can be addictive! (and then you would recover only by attending the Guča Trumpet Festival, the biggest Balkan Brass Band music festival which takes place every august in Guča).
BELGRADE AND THE POETRY OF DECAYING
You can hover over these (or any image) to quickly pin it! 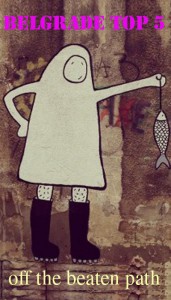 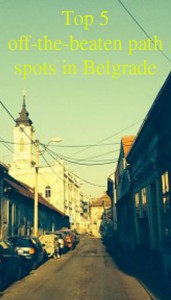 Belgrade off the beaten path: travel diary of my 2nd day in Belgrade