Street art in Ponticelli, the neglected outskirts of Naples 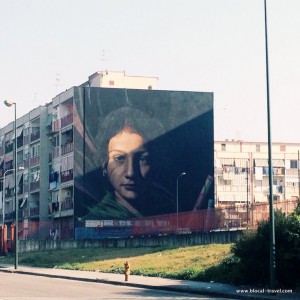 A picture is worth a thousand words but, in this case, a picture is not enough. To get the full potential of this street art project organized by Inward you must walk around Parco Merola (Ponticelli), a disadvantaged area in the eastern outskirts of Naples. You must step into the decaying courtyard, meet the people living here and see the neglected buildings with your own eyes to understand that everything that has been written about the Neapolitan outskirts isn’t just words in a newspaper, but actual social contexts that, with a thoughtful work based on street art but also on discussion and understanding, can change.

What I liked about this project is that murals aren’t large-scale reproductions of top-down sketches drawn elsewhere. Street art in Ponticelli isn’t out of context, even if only one of the artists was born in the area. All the artists who took part in this project accepted the challenge of developing their murals in-progress, by listening to the local community, finding inputs in it and opening up to a discussion about their work. Again, to understand what this creative process meant, you must visit Parco Merola. It isn’t a curatorial board or a community of artists, but a place where no one has ever held a brush or a pencil before, not to mention studied art or attended exhibitions. Moreover, being there I noticed that the artist-at-work, Mattia Campo dall’Orto from Trieste (a town on the northern border of Italy), needed a translator to understand what the local kids, who only speak Neapolitan dialect, were asking. And they were questioning the palette of colours that the artist meant to use to paint the faces, too pale according to a kid with olive skin. That’s the kind of ‘intrusion’ allowed, or rather encouraged, at Parco Merola; that’s the big challenge faced by the street artists, which –eventually- allowed them to deliver street art that works on the local community’s terms and which they are very proud of. 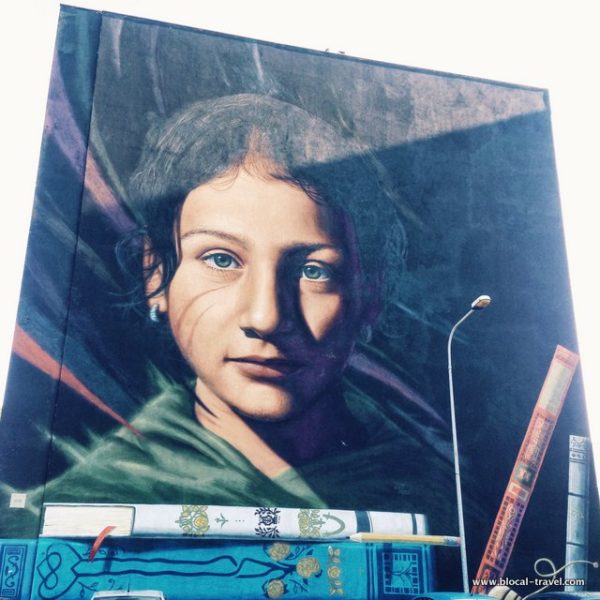 The first mural painted in Parco Merola is by the renowned street artist Jorit Agoch, the same artist who painted the Saint January’s portrait in downtown Naples and the Afro-American kid in Brooklyn, the latter being unanimously considered among the top 20 street art works of 2015.

The protagonist of this mural is Ael, a young roma girl that the artist had met in a nearby gypsy camp. When that camp was burnt down, the anti-racism office offered to sponsor this mural to spread an important social message in an area where integration is proving very difficult. At the bottom of the mural there are some books, pointing out that racial integration will be achieved when roma kids can attend schools like any other kid, as it is through culture, learning and mutual understanding that you can get over racism.

On Ael’s right cheek there is the tribal sign marking every countenance painted by Jorit Agoch. After several trips to sub-Saharan Africa, the artist began to stigmatize his subjects with two red lines that look like scars, which refer to ancient African rituals and indicate that the portrayed subject belongs to his ‘human tribe’; a tribe that isn’t based on race, gender or religion, but on those characteristics that make all human beings equal. The realism of Jorit Agoch’s countenances is really impressive and usually the most powerful point of his portraits is the gaze. To me, Agoch’s mural paintings always recall Stephen McCurry’s photographic art.

While we were admiring Agoch’s street art, a fruit-and-vegetables van entered Parco Merola and drove around it several times, listing all available products through the loudspeaker. ‘This place is so isolated that sellers come right into it” my friend explained. 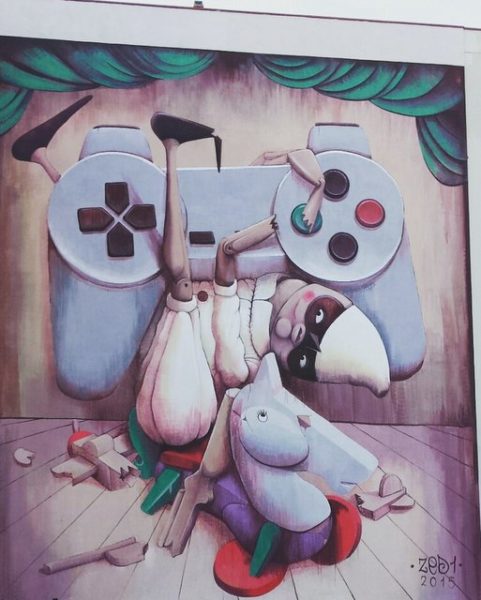 The title is from a popular saying, which means ‘to entrust children with important things that they can’t handle’

Zed1’s mural is about toys and childhood. To understand why he came up with this theme, let’s go one mural back and look closer at Jorit Agoch’s work. At the bottom, near the books, there is a ‘strummolo’ (a wooden top), which was a popular toy in the past but a stranger to today’s kids to the point that, when he was drawing it on the wall, they kept asking him what it was supposed to be. After further discussions with local kids made it clear that they play mostly with technological games, preferably indoors and on their own, Zed1 decided to paint about modern games vs. traditional toys and mass production vs. craftsmanship. This theme fits perfectly with his on-going personal reflection on human beings and modern society and, looking at this work, I found that he majestically adapted his iconic characters and his sensitivity to the local context.

Zed1’s mural depicts a devilish gamepad crushing the traditional, wooden toys, among which a marionette represented as half ‘Pulcinella’ (the traditional stock character in Neapolitan puppetry) and half ‘Pinocchio’ (the wooden marionette that is the protagonist of a popular children’s novel, whose author, like Zed1, is from Tuscany). The curtain at the top of the mural aims at ‘staging’ the scene, as if to say ‘this is happening: here and now’. 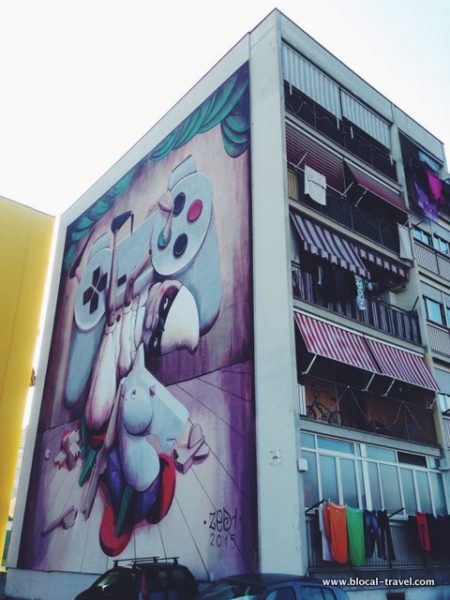 The fruit-and-vegetable van stopped behind us and an old lady lowered her basket from the window. We walked past it and entered the courtyard of Parco Merola, where we found the third mural. 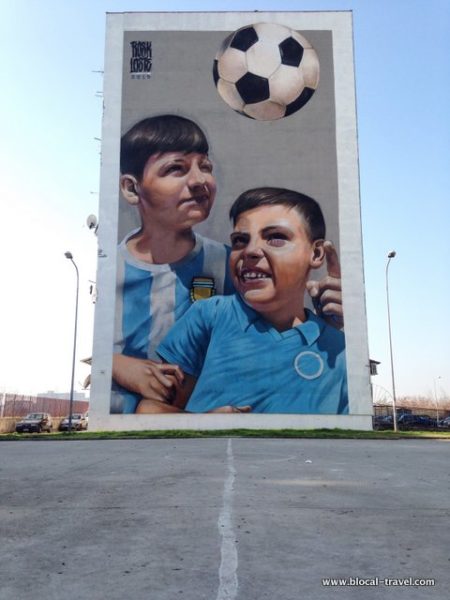 The title is a quote from Maradona and it means ‘who is well-cared for will never forget it’.

Still game-themed, this mural invites children to play with friends in the open air. It also served to push the local municipality to undertake some renovation works in the courtyard to give to the local kids a safer football pitch to play on. The concept behind this mural –in fact- is the importance of taking care of the place where you live, which will educate the next generations to do the same. It was my first ‘encounter’ with these two very talented street artists from Sicily (Rosk and Loste) and it definitely was love at first sight. Their realism is impressive, especially the three-dimensional effect, which plays with the peculiar way in which the sunlight moves across the courtyard during the day. The mural depicts two kids with a ball. One kid is wearing the t-shirt of the Neapolitan team, while the other is wearing the t-shirt of Argentina, as yet another tribute to Maradona (the guy is really worshipped in Naples, btw).

While we were admiring this mural, a kid approached us and warmly hugged my friend and guide-for-the-day. I introduced myself but he was too shy to answer, or to look into my eyes. On tiptoe, he whispered something into my friend’s ear. ‘I’m glad to know that Santa gave you what you had asked for’ she replied; the kid gave her a big smile and, suddenly, ran away towards the last mural of our tour, where his peers had already gathered and were discussing some ‘artistic matters’ with the street artist currently at work. 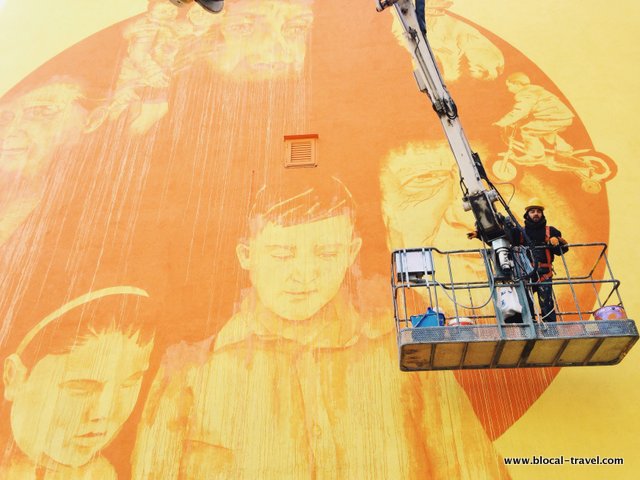 This work is still without a title. As soon as the local kids declare it, I will update the post.

When I visited Parco Merola this mural was still ‘under painting’, but I already could spot Mattia Campo dall’Orto’s majestic style. Drawing on his on-going artistic research about memory and identity, Mattia developed the theme of storytelling and the importance of reading a story together. Sharing the dreamscapes of a story, like the shared memories of a community, binds people together and make us feel less lonely.  What I like about Mattia’s portraits is that they go from realistic to distorted, due to the ‘pixel’ effect that he uses to deform his countenances.

I asked my friend to send me a picture of Mattia’s mural when completed and here it is: 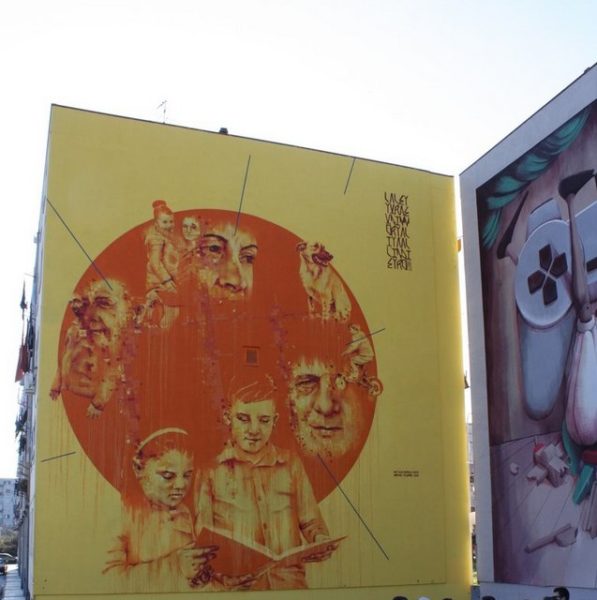 While I was introducing myself to the artist and mumbling compliments about his work in progress, someone yelled to us from behind the fences surrounding Parco Merola. That’s how I met Michele, a guy who was in Ponticelli to visit his family during the Christmas holidays and was now about to drive back to Milan, where he currently lives. Michele confessed to us that, while he was driving past Parco Merola, he was intrigued by Mattia’s mural and couldn’t help stopping the car and coming closer to see what was going on. We talked about street art, gentrification, Milan vs. Naples and Naples vs. its own outskirts, Camorra, new generations, expectations and opportunities for someone growing up in this kind of area (which, usually, means getting away, as Michele did).

Eventually, he realized that he could drive into the area and so we carried on our enthusiastic conversation without a fence between us. While my friend was showing the project to Michele, I had the chance to enjoy a second street art tour of Parco Merola, and even after that I couldn’t get enough!

Moreover, during this second round, I finally discovered what that cute local kid had asked for for Christmas: a box of colourful crayons. 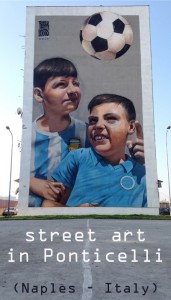 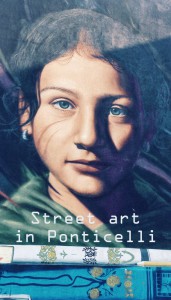 One weekend in Barcelona: my plan so far