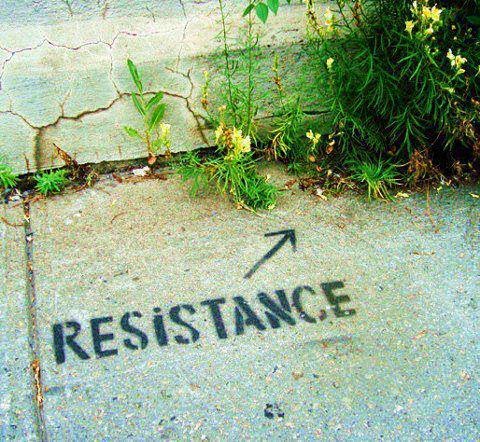 I was really looking forward to meeting Valerio!
Not long ago a common friend took part in one of his Mamma Roma tours and she thought Valerio’s urban exploration project CASADOM would probably cross somehow with my personal work of writing about beauty in the suburbs in search of  another Rome.
And so, there I was on a sunny Sunday morning with two friends waiting for the rest of the group at a kiosk in my childhood neighborhood.
Valerio’s tour was going to start from Gilles Clement’s concepts of the moving garden and the third landscape theory: areas that are neither untouched nor designed by men, or -to quote Gilles Clement himself- “the sum of the space left over by man to landscape evolution – to nature alone. Included in this category  are left behind urban or rural sites, transitional spaces, neglected land, swamps, moors, peat bogs, but also roadsides, shores, railroad embankments, etc.”
Anyway, the point of the tour was to cross all these left-behind spaces in Corviale neighborhood and be conscious of our presence and our movement into the space while doing so. Our third landscape was made up of woods, overgrown meadows, olive groves and wild fields; as it came out, our urban exploration wasn’t going to be  that urban, after all! 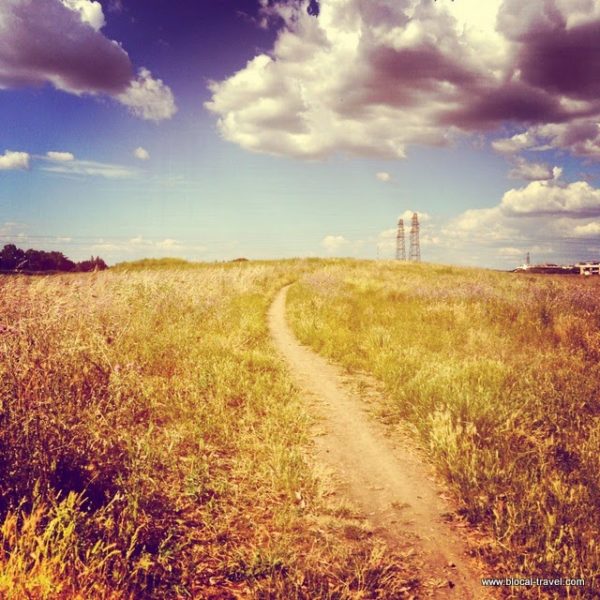 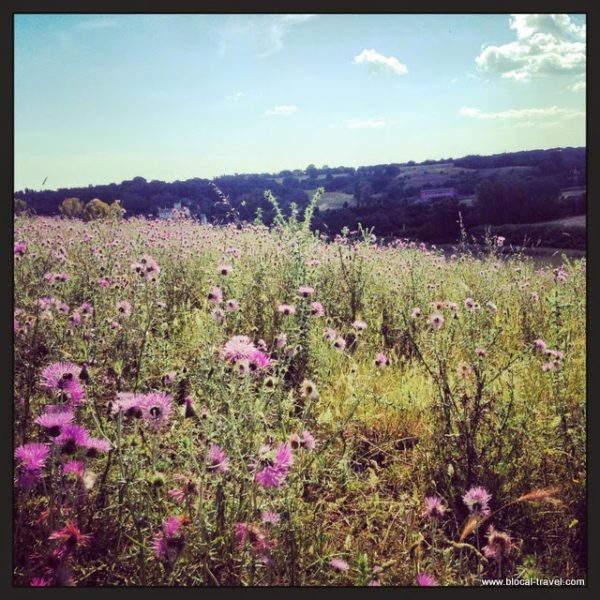 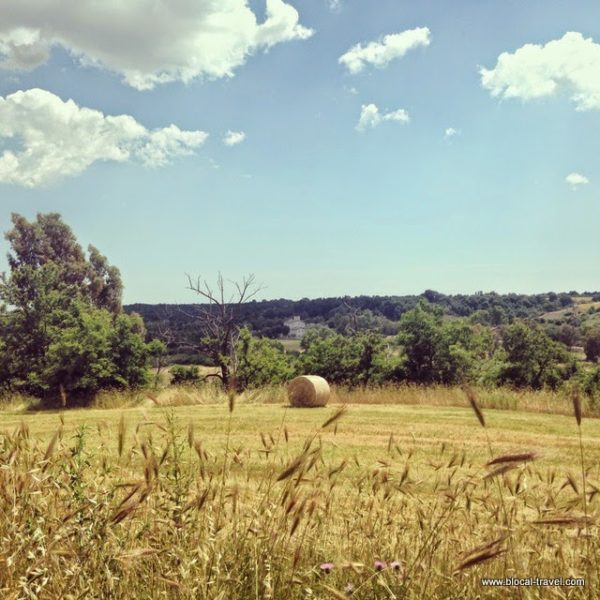 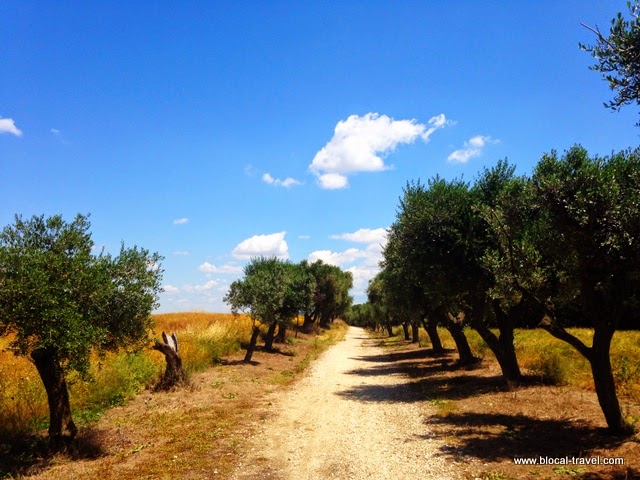 The first thing I noticed was that we weren’t crossing “weedy areas”, but spaces inhabited by several plant species and different kinds of animals too. As we walked past sheep, goats, horses and porcupines I couldn’t help marvelling at how many animals live in what I had always considered quite an urban area marked as it is by the intrusive presence of the council housing compound “Corviale” (a huge, imposing block of reinforced concrete). 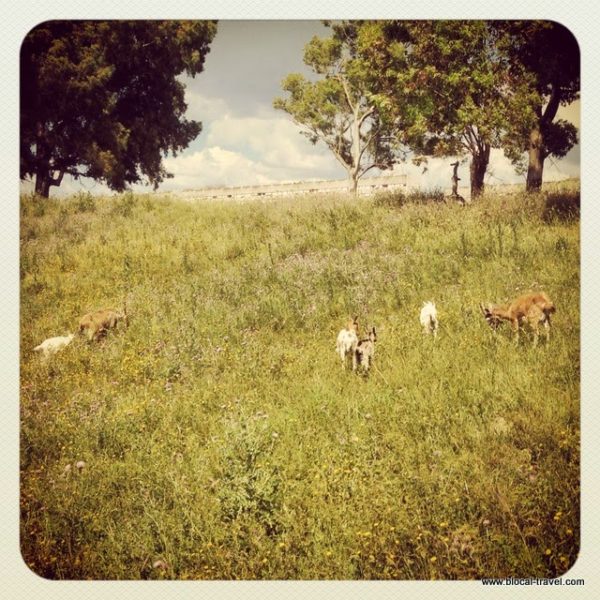 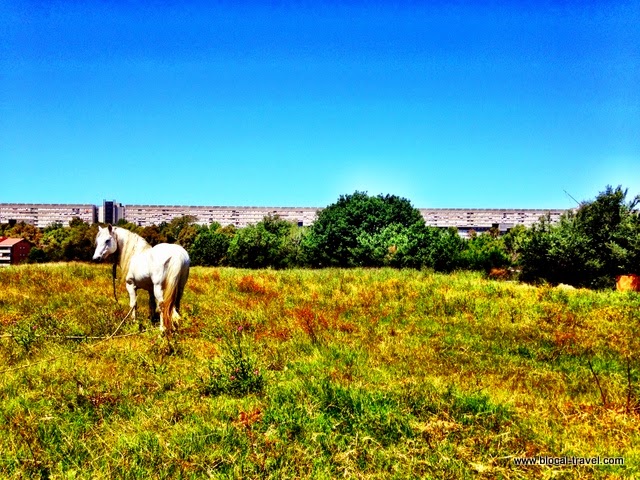 As the landscape changed constantly, I enjoyed the many different scents along our way: from the jasmine found on the more urban path between one field and another to the broom of the most hilliest fields, and from wild fennel to mint in the meadows. 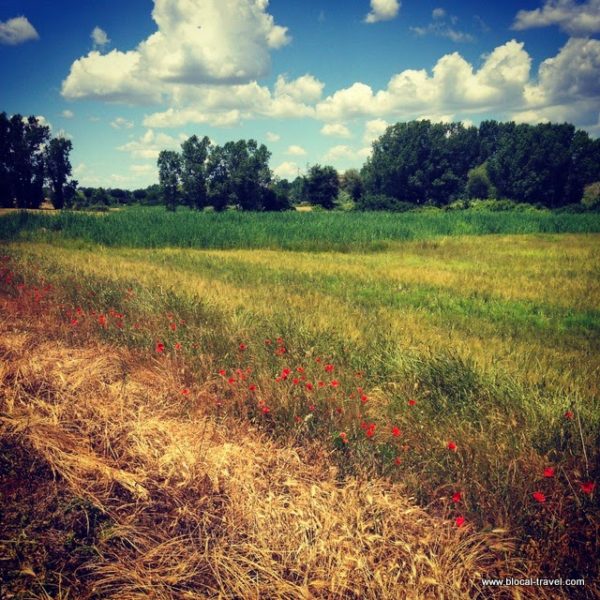 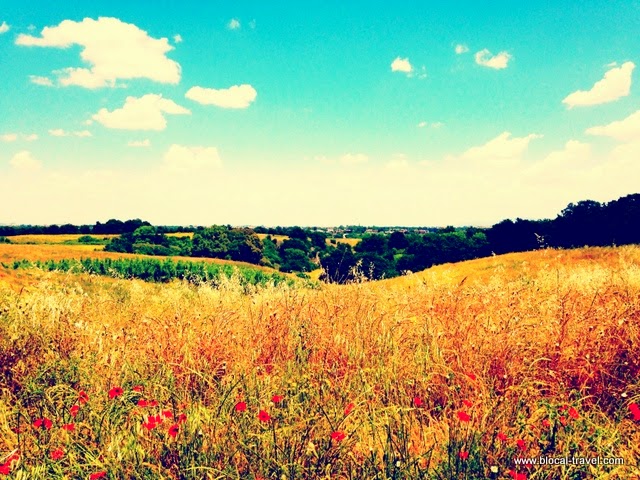 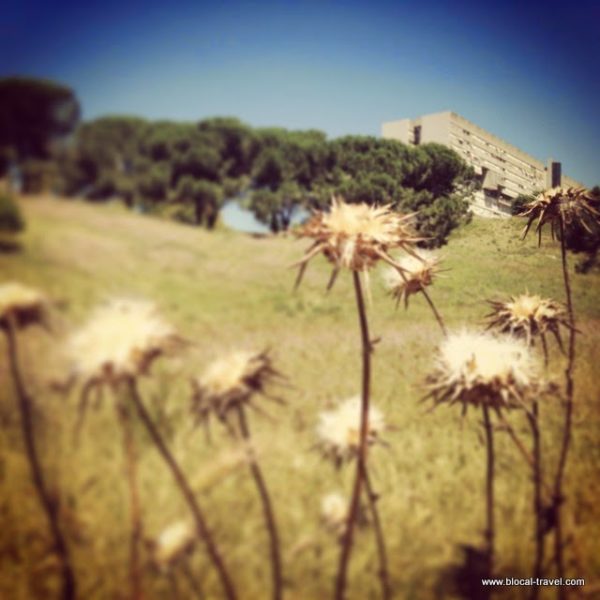 The Corviale compound was our Great Wall, always visible from wherever we were walking. 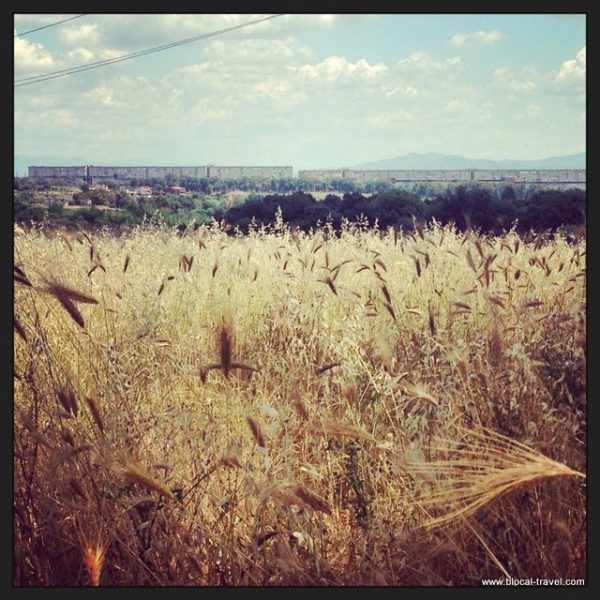 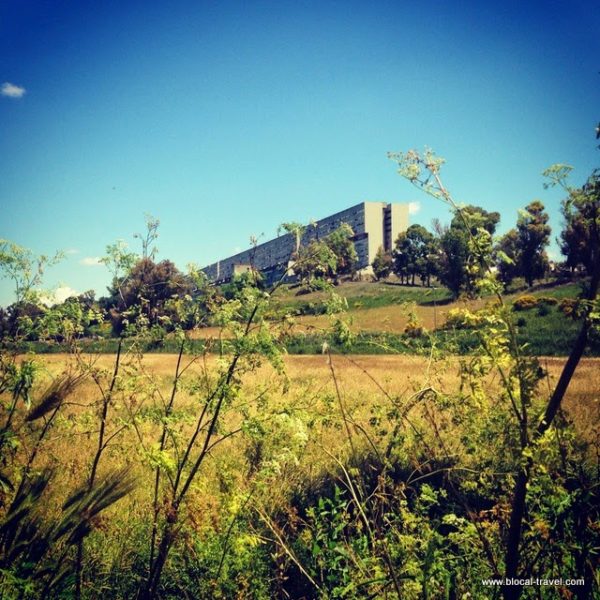 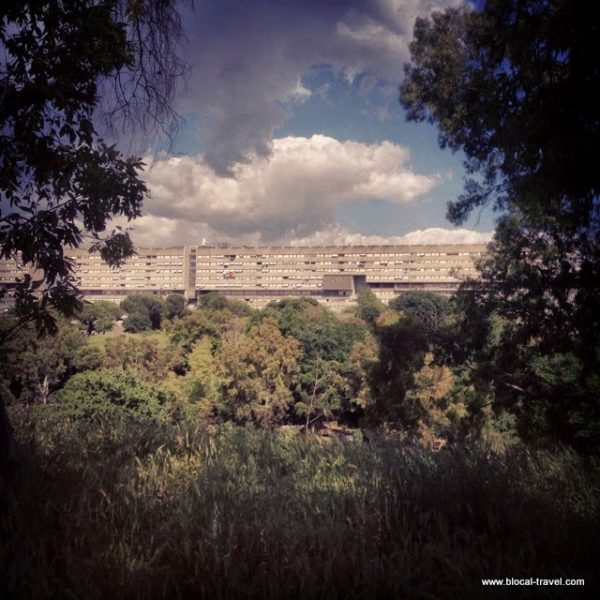 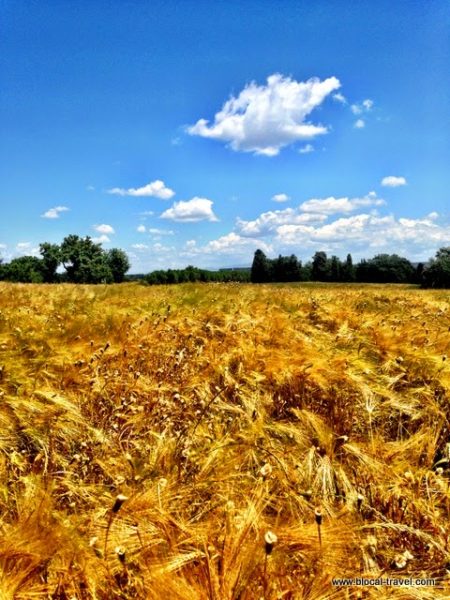 I especially enjoyed the fact that, despite being in a big metropolis, we were hiking into the wild countryside. I felt in tune with whatever quiet or Nature was there before the urbanization, because it is actually still there, hidden behind the main roads of the area (including the G.R.A. itself) and one of the most impressive architectural structures in the Roman suburbs.
Acknowledging the presence of a “third landscape” inside such a big and chaotic town means noticing an undercurrent of peace, as the third landscape is intrinsically peaceful, harmonious as nature herself.
Acknowledging these eternal, natural areas puts the ever-changing metropolis into perspective, helping us to recognize that our buildings, our roads and human constructions in general are all relative and fleeting (wild nature came first, and it will come after), which is another reason why I am always so fascinated by abandoned factories and ghost towns. 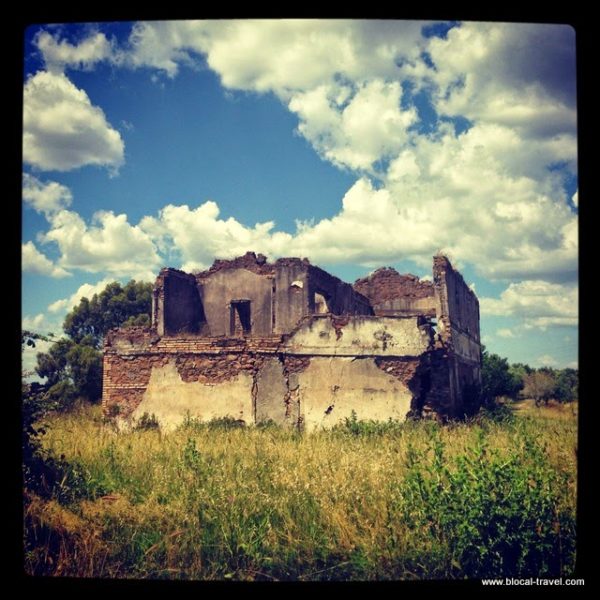 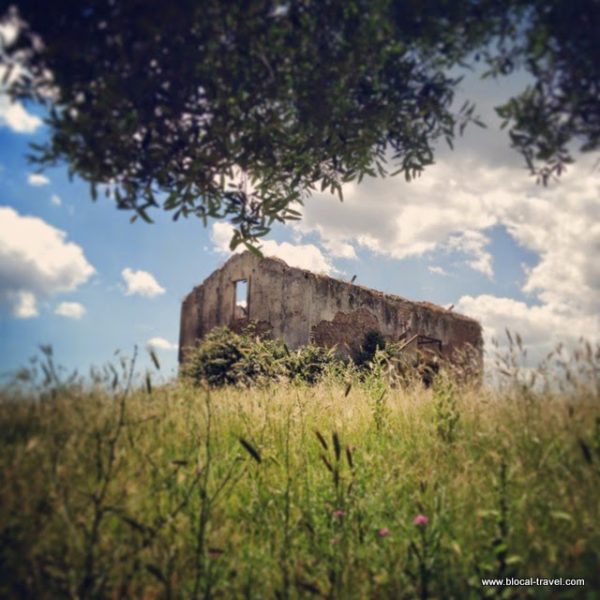 In the afternoon we finally arrived at Corviale, the controversial council housing building consisting of two compact blocks 1 kilometer long and 9 floors high. This compound was built during the 1970s and it contains 1200 apartments. When we entered the beast, the feeling was similar to entering a big ferry beached on a desert land but -despite the common idea of Corviale being an ugly and unsuccessful project- I liked walking along its galleries and admiring the view from the top floor. Of course, it is a long way from being an optimal housing solution, but as always “beauty is in the eye of the beholder”. 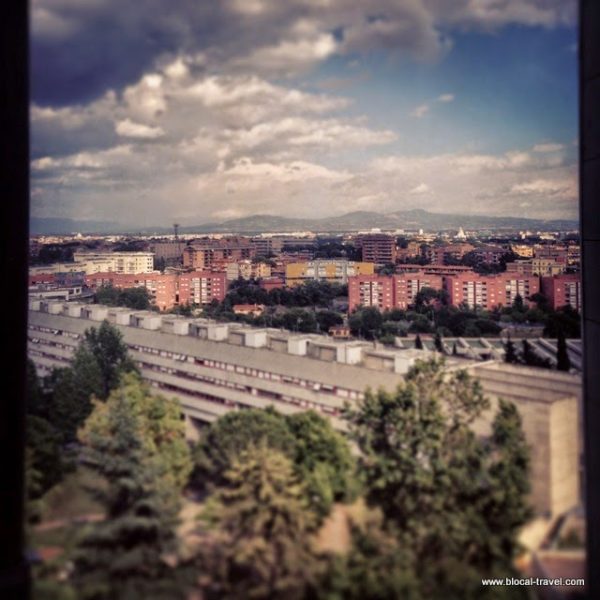 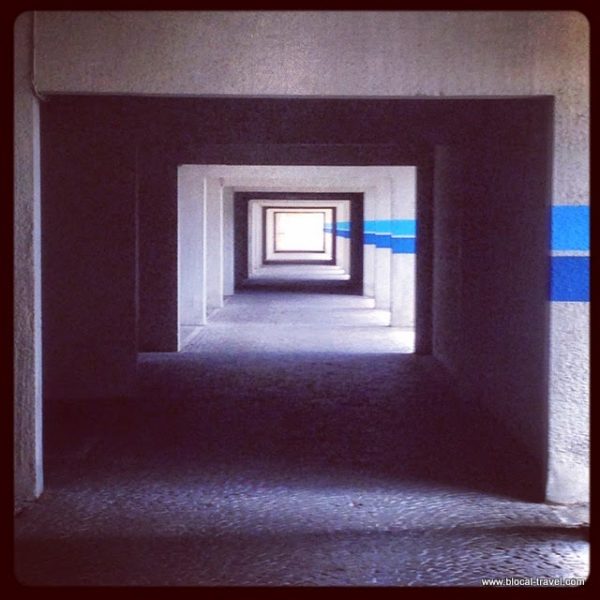 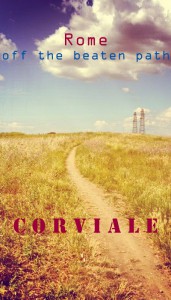