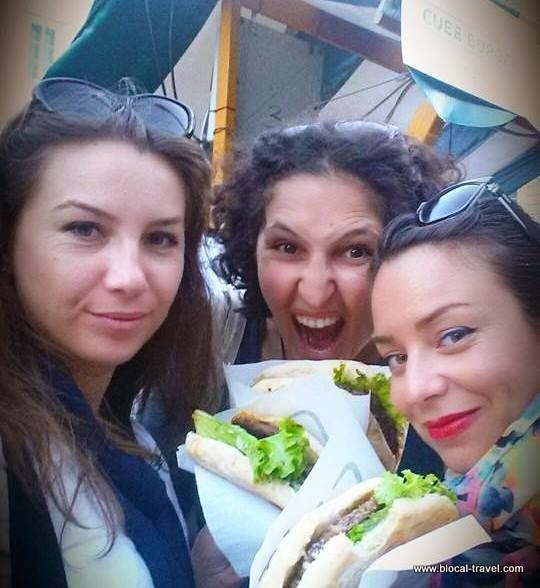 The whole point of this short trip to Ljubljana I just had was a reunion with two of my former housemates from my EVS time in Slovenske Konjice (Eastern Slovenia), two girls I kept being in touch during the following years and with whom -back then- I instantly had a special bound based on our common passion for food –hence our trio nickname “trije prašički” (the three little pigs, as those from the fairy tale). And so, as you can easily guess, our trije prašički’s reunion in Ljubljana revolved mostly around food :-)
Elena, the one of us who still lives in Slovenia, was in charge to select a bunch of high quality restaurants in Ljubljana and she did a great job, even outdoing her own Ljubljana’s best restaurants selection from last time I visited her in September 2013.
(and if you were wondering why I titled this post “VOL. 2” you should click on the previous link to read where Elena brought me to eat the previous time).

On our first evening we went to a nice little restaurant in Trnovo neighbourhood, which is my favourite district in Ljubljana. The funny thing is that when I was moving to Slovenia back in 2008 I spent one night in Ljubljana before driving further until Slovenske Konjice and on that night I ate in a nice little restaurant with a beautiful garden; back then I didn’t know Ljubljana at all and I found that tiny inn by chance while wandering around the town and so I didn’t have a clue about where it was located and even if I meant to go back to that inn for the following 6 years I was never able to find it again, but last Saturday -thanks to Elena- I was finally back at Pri Škofu! 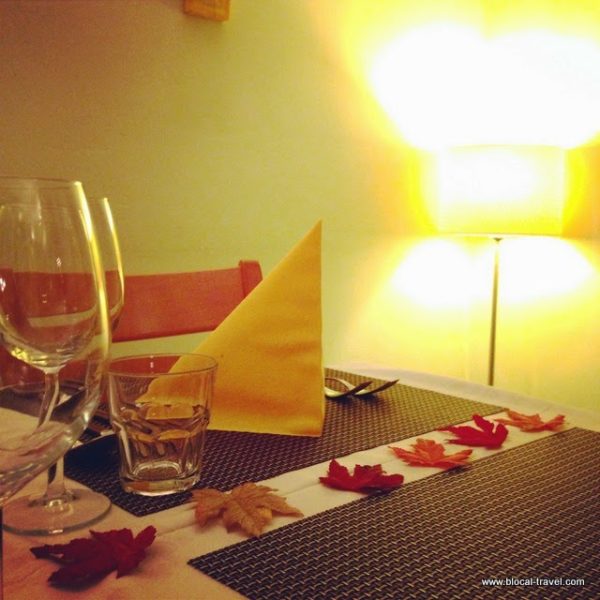 Anyway, enough with anecdotes, let’s talk food now: :-)
At Pri Škofu (which, btw, means At Bishop’s in Slovene) I had pork meat with figs mustard served on a strudel stuffed with ricotta cheese, while Luisa had roast-beef on a fresh salad with smoked ricotta grated on it and baked potatoes aside, and Elena had a steak with candied pear served on smashed potatoes. We also shared a buckwheat & mushrooms first dish and I had to congratulate the chef on the excellent mushrooms! All dishes were very creative and tasty, and they even came with different little flowers on them: so nice :-) [if you are feeling hungry, check Pri Skofu’s website here]

Ljubljana is not a typical Balkan town, but still you can enjoy lots of Balkan vibes and traditional Balkan food in Ljubljana too! This time I had my share of ćevapčići and ajvar at Raubar restaurant, a typical Balkan tavern with a big backyard garden in Bežigrad neighbourhood. Here I also had a traditional goveja juha (beef soup), a dish that always tastes so Balkan to me! 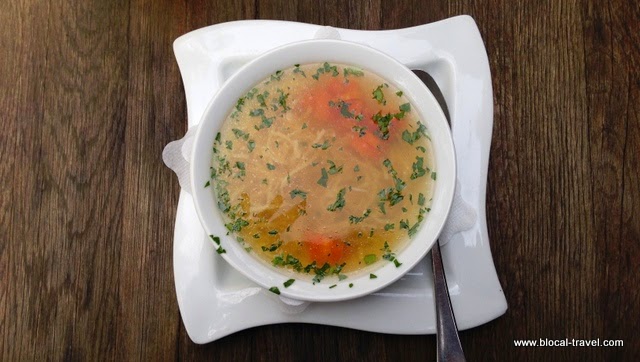 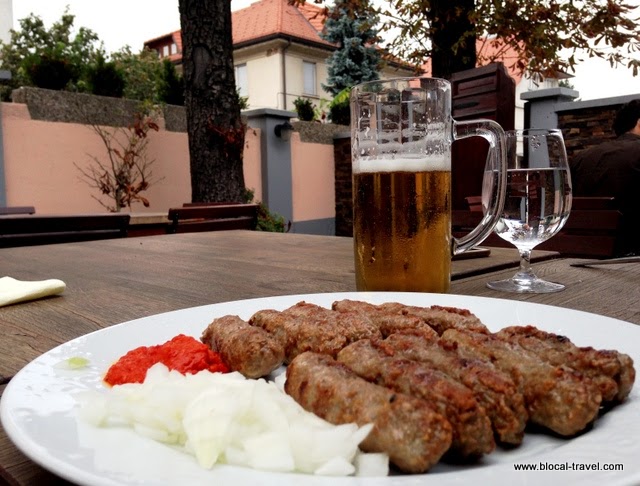 As the name says, this is a traditional inn (gostilna in Slovene) and so don’t expect anything fancy but rustic furniture and lots of Balkan traditional food from the finest fresh ingredients (my ćevapčići’s  meat was so soft that even writing about it still makes me drool!).
[if you are feeling hungry, check Raubar Gostilna’s website here]

You might remind my enthusiasm for this very nice little restaurant in the VOL. 1 of this “Eating out in Ljubljana” series and my wish to come back as soon as possible -which eventually happened to be one year later.
The food at Izložba is still exceptional and fresh local vegetables are still the protagonists of all dishes on the menu. Last year we went at dinner time and so the atmosphere was more romantic with many small lights hung on the big tree in the middle of the garden, while at lunch the restaurant is frequented by youngsters working nearby on their lunch break, but still the garden in all its autumn colors was pretty charming and the concept of the restaurant is still authentic and very homey. Just have a look at their open-plan kitchen :-) 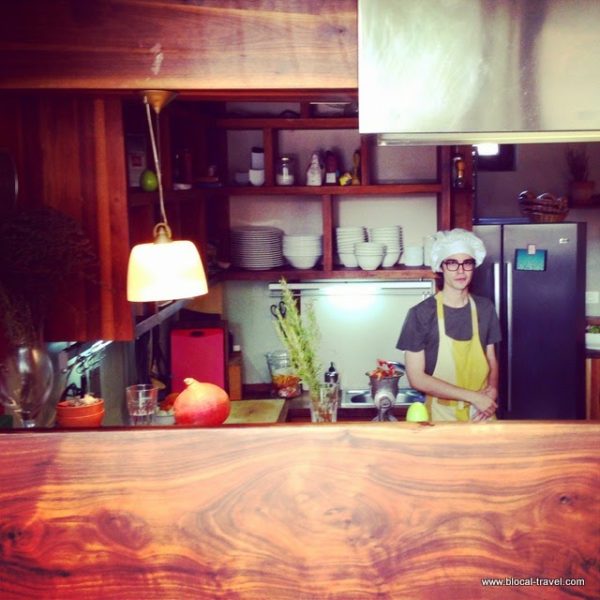 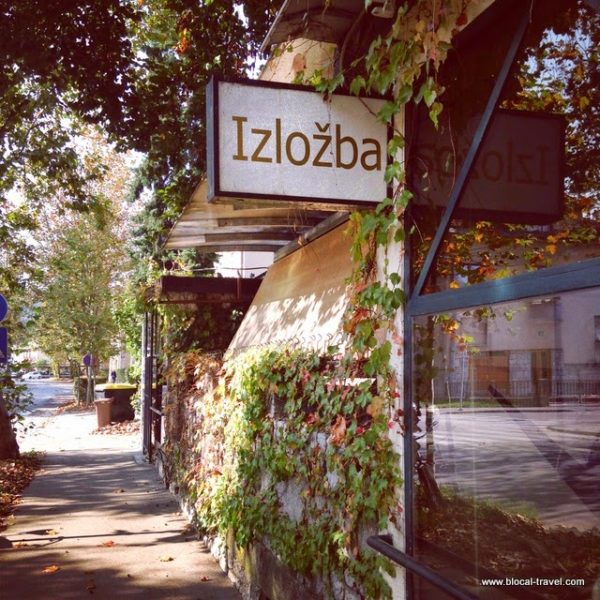 As I promised to one Blocal’s reader that I would have had a whole vegetarian meal when in Ljubljana, at Izložba I ordered a spelt salad with fresh cheese, tomatoes, young spinach and pumpkin seeds, while my friends both had beef with arugula, young spinach, parmesan cheese, lemon and pine nuts. 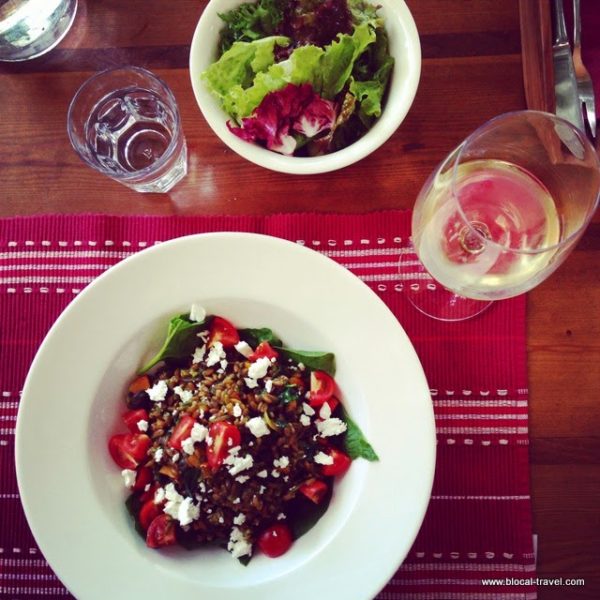 The dessert was an ice-cream with pumpkin syrup and pumpkin seeds, pretty unusual you might think but it turned out to be a really yummy combination! 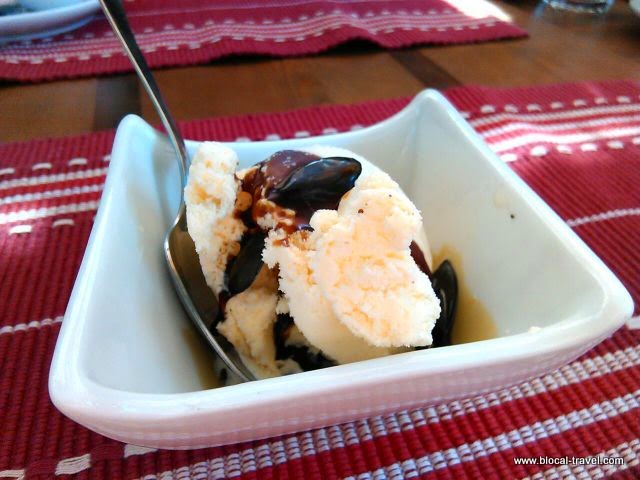 [if you are feeling hungry, check Izlozba’s website here]

Without even knowing it, we organized our trije prašički reunion on the opening weekend of the “Ljubljana restaurants’ week” initiative, which allows you to book special tasting menus all around Ljubljana’s best restaurants at special prices. We took advantage of this promotion at Manna, an elegant restaurant in Trnovo neighbourhood, where we booked both menus available: one based on fish and one based on meat.
Thus we had the chance to taste many different things from octopus carpaccio to cheek served with different homemade pates (all very tasty!) and from crab ravioli with shrimp and black truffle to ravioli stuffed with porcini mushrooms together with goulash and homemade onion mustard. 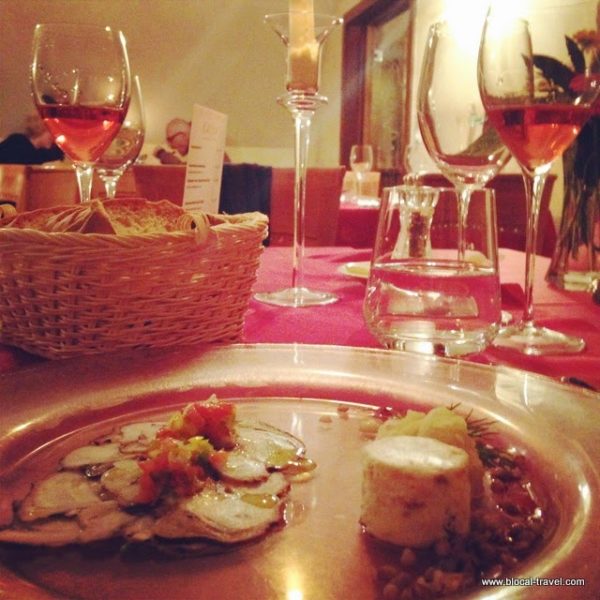 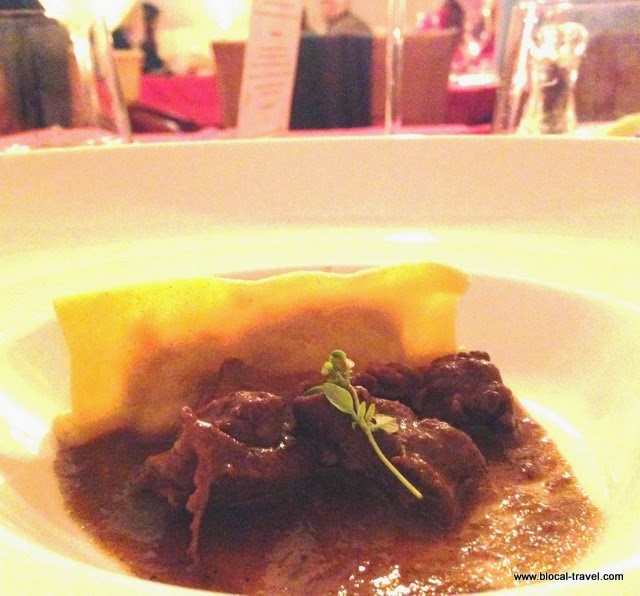 The main courses were a slow-cooked fish fillet with caviar and sea food served on a slice of black cornmeal mush and a young pig meat with beetroot and more fresh vegetables aside.
It has been a delicious dinner and we even tasted some great Slovenian wines. 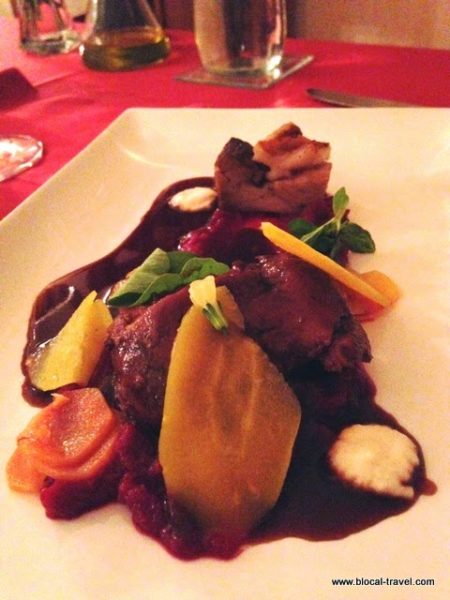 [if you are feeling hungry, check Manna’s website here]

Organized by the same guys from the Odprta Kuhna festival (the food market festival I got crazy about last year), the Beer & Burger weekend festival has been another great Ljubljana culinary opportunity happening on that very special weekend and we just stumbled upon it on Sunday afternoon after a two hours biking tour of Ljubljana suburbs, which obviously left us very hungry and most of all very thirsty! And so… is even there a better combination than beer & burger to fill our needs? 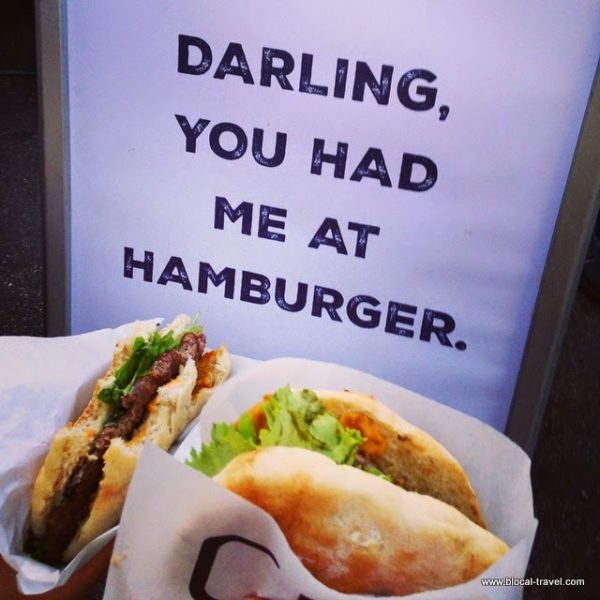 The festival took place in Pogačarjev Trg, a big square at the very heart of Ljubljana which -despite the fact that the festival was at its first edition- was especially lively and filled with an animated crowd. The concept is the same as the Odprta Kuhna food festival: many stands serving tasty burgers and as many of those serving beers, plus good music and a youngish crowd sharing an enthusiastic mood.
Wavering at the wide range of choices, we opted for a traditional burger at Cube’s stand, as we knew that Cube is one of Ljubljana’s best restaurant. As for the beer(s), we tasted both draft beers at the Austrian stand Bevog and the ones from the popular Slovenian brewery Laško. 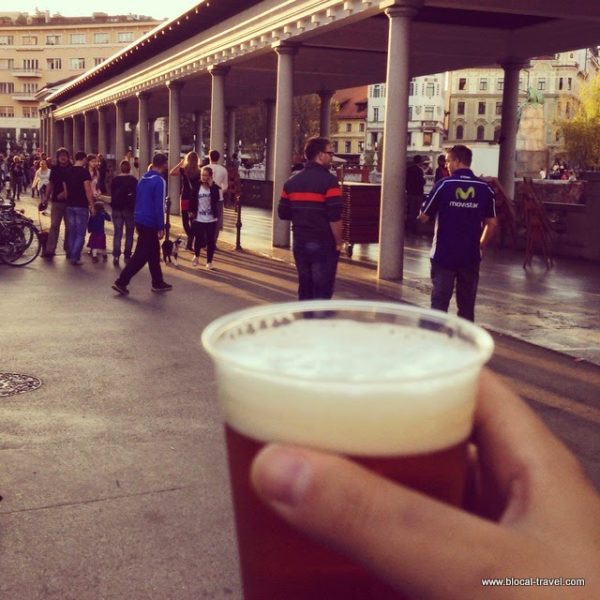 [if you don’t wanna miss any culinary event organized by the Odprta Kuhna crew (and you really shouldn’t, trust me!) check their website here]

Wandering around the city centre in the late afternoon with a dinner reservation at 8pm… wouldn’t you grab a meat-and-onion burek at the best burek kiosk in Ljubljana? We did, of course! :-)
Usually, I am suspicious of places which claim to be the number 1 in the city, but in Nobel Burek’s case what is written on the green signal on Miklošičeva Ulica is true: here you can actually have the best burek of Ljubljana! 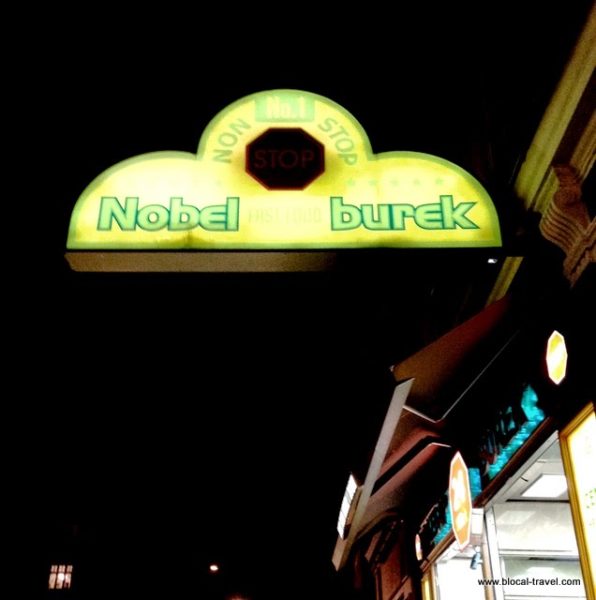 [if you are feeling hungry, check Nobel Burek’s website here]

While trying to become one of the hippest capitals in Europe, Ljubljana must have a 100% hipster spot such as Todz, a bar located along the Ljubljanica river with a retro design inspired by former Yugoslavia. 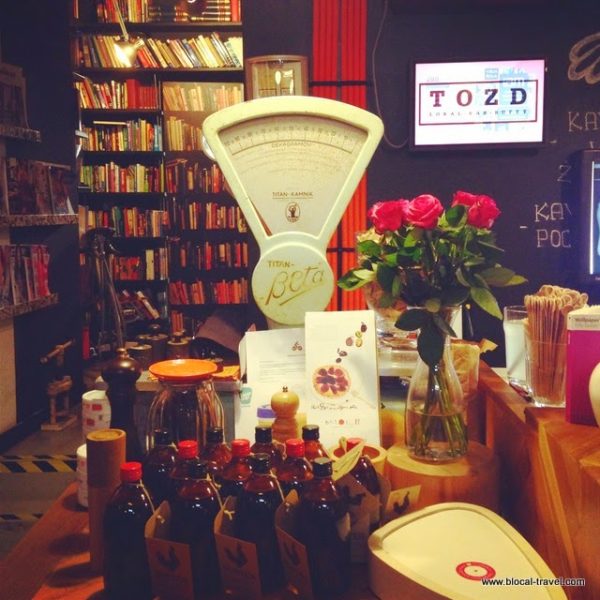 Here you can have roasted and cold brew coffees, Slovenian draft beers by Human Fish brewery and excellent wines, among which those by Marjan Simčič -exactly the wine I was looking forward to taste during this short holiday in Slovenia. They also serve some food like tapas or quiches, but weirdly enough we didn’t eat anything here! :-) 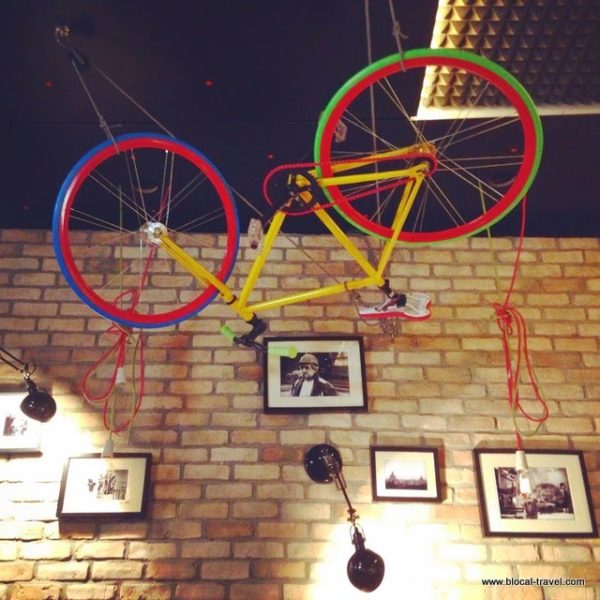 [if you are feeling hungry, check Tozd’s website here]

Lolita is a very beautiful pastry shop in an old building at the very heart of Ljubljana, with big windows overlooking the most lively spot in town: the triple bridge Tromostovje.  Not only the design of the interiors is very charming, but you would love also the design of Lolita’s cakes, pastries, cookies and colourful macarons. 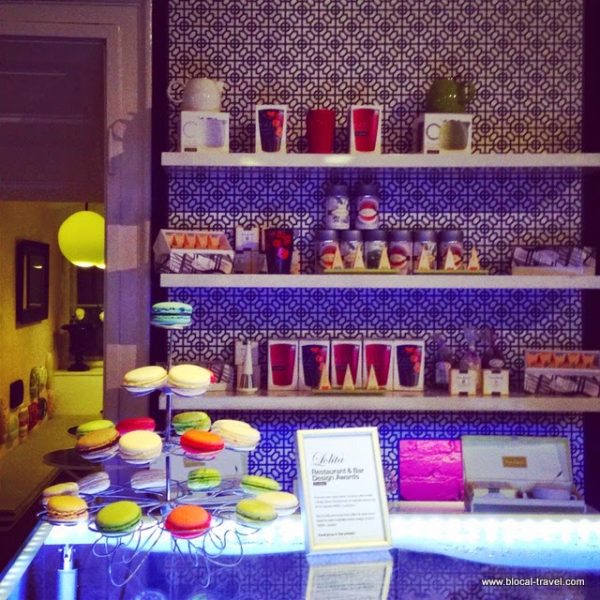 [if you are feeling hungry, check Lolita’s website here]
And so my foodie experience in Ljubljana was great as expected; I noticed that during the latest years there has been a lot of excitement going on into the Ljubljana food scene, Slovenian chefs are becoming more creative by re-interpreting the traditional Slovenian recipes and they use more Slovenian typical products; many food festivals and food initiatives are taking place and new bars serving draft beers or other niche products are popping out all around the town: I can’t wait to be back in Ljubljana to see what’s next!

Find these spots and many more insider’s tips in my Lubiana Google Map!

PEEK THROUGH | You find the best of Ljubljana’s food scene in my video “4 days in Ljubljana…in 40 seconds“
You can hover over these (or any image) to quickly pin it! 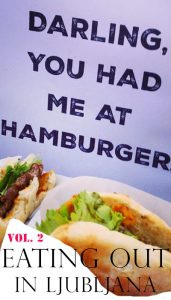 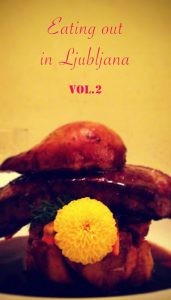