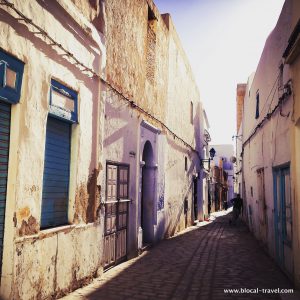 “The essence of ‘A thousand and one nights’, which is, however, ninety-nine per cent real. What an aroma, how penetrating, how intoxicating, and at the same time simple and clear. Nourishment, the most real and substantial nourishment, as well as delicious drink. Food and intoxication. Scented wood is burning. Home?”

Like Paul Klee, I fell completely under Kairouan’s spell. Its countless shades of blue glare through the narrow and winding streets, while subtle sands wash through the sultry air carrying golden reflections. 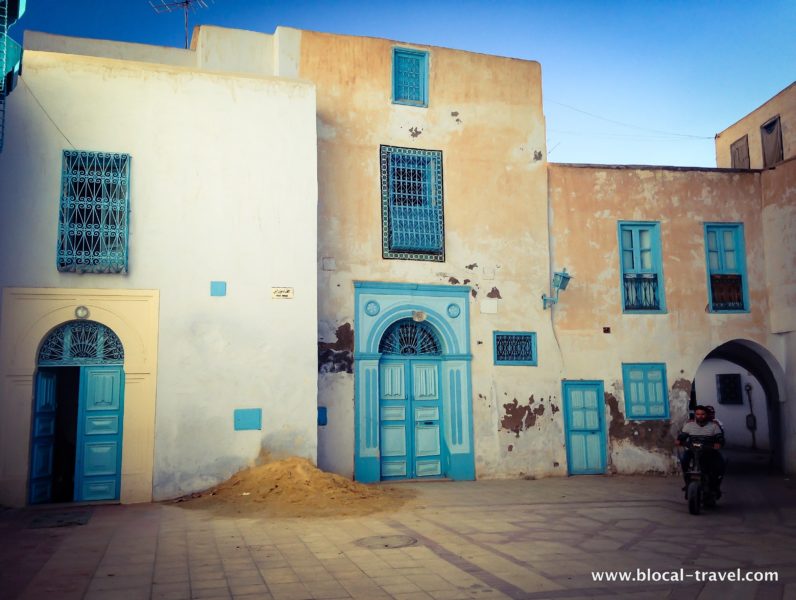 The light is vibrant, the atmosphere is quiet in the small streets -where the silence is thick- yet bustling in the suk where the stalls sell patterned carpets, spices and crafts. Considered the fourth holiest city in Islam after Mecca, Medina and Jerusalem, Kairouan is a UNESCO World Heritage Site and the location of the most ancient mosque in North Africa. It was founded in 670 as a military post for the conquest of the west and, from there, Islam spread through the rest of Maghreb. 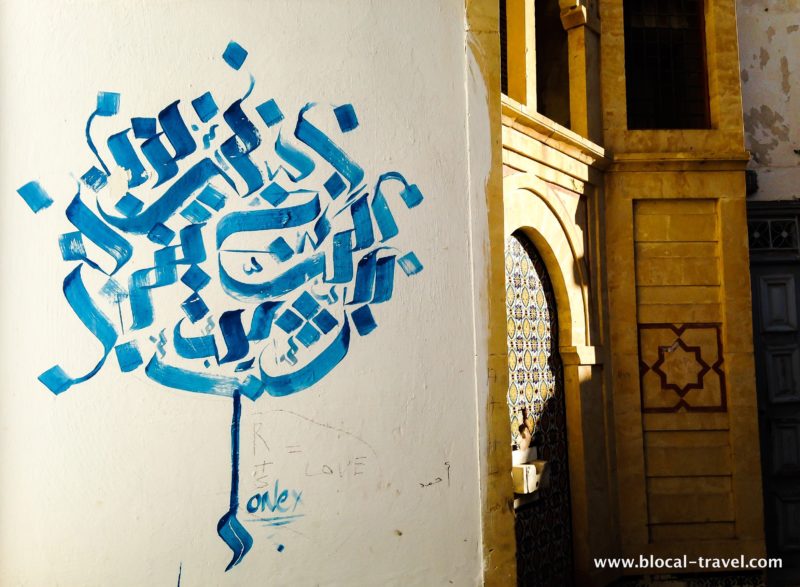 The sun slowly worms its way through the narrow streets where shadows are sharp and shaped by raw walls painted in shades of white, then explodes in the midst of large squares where men smoke water pipes sitting on colourful plastic chairs in front of frugal coffee shops, while kids play with at ball, zigzagging between the rusty tables. 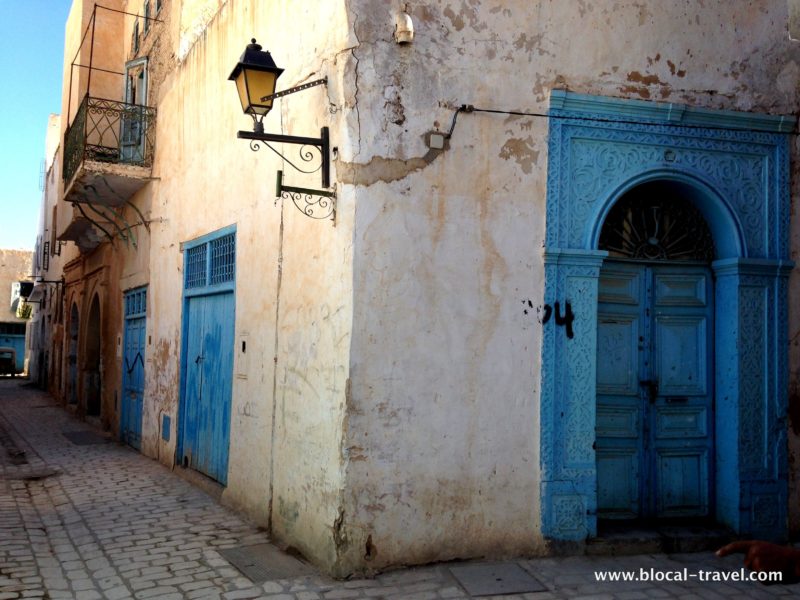 Within its high, austere surrounding walls dotted with towers and bastions, the medina of Kairouan encloses many small, vaulted mosques and hundreds of elaborately-decorated arched doorways, balconies and shutters in shades of blue and green, which are the only luxury on otherwise dull and rough walls. The bustling suk is juxtaposed to a quiet maze of winding streets, narrow alleys and tiled courtyards: the authentic image of an Arab city. 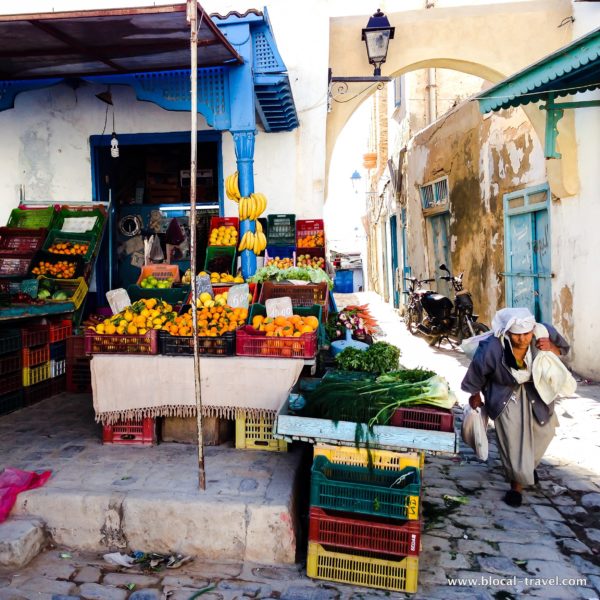 Kairouan > The Great Mosque of Sidi-Uqba

Our visit to the Great Mosque is interrupted by the Muezzin’s call-to-prayer, which spreads through the highly geometric courtyard breaking upon the noonday heat. 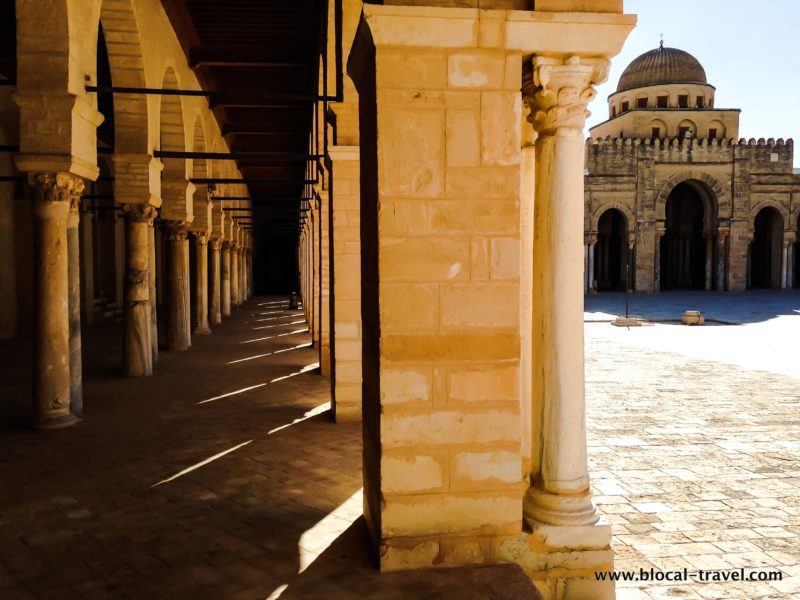 The high sun dresses the colonnades that line the courtyard, three long aisles cut with sharp shadows leading to the prayer room, whose entrances are guarded by several huge, fine-carved doors. 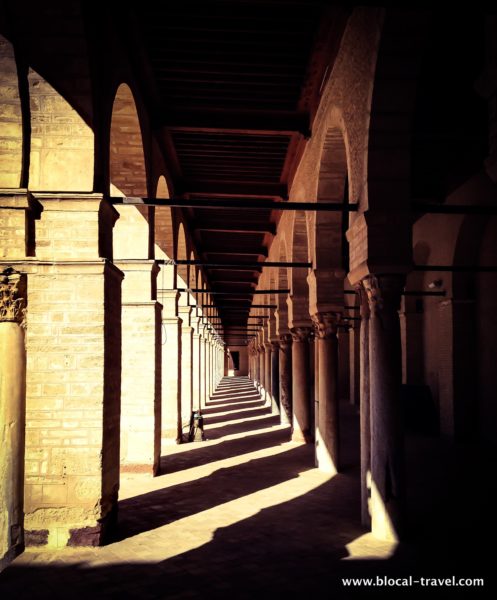 There is a great contrast between the austere architecture of the Aghlabid exteriors and the richly adorned prayer room, where many arches stand out in semidarkness supported by a forest of columns in marble and porphyry, which were taken from the ruins of Carthage. 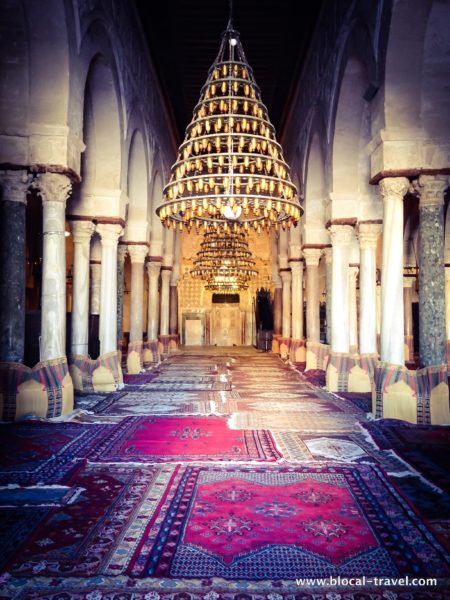 The clear-cut lines and the ochre shades of the courtyard paved with marble inspire quiet and meditation. Just being there brings my soul into sweet surrender, my thoughts wander on the notes of the muezzin’s voice, while my eyes narrow in the bright sun. Founded in 670, the present aspect of the Mosque dates from the 9th century. It is named after the founder of the city, who –according to legend- stumbled upon a golden cup hidden in the sand, a cup that had been lost in Mecca; when he picked it up, water gushed from the ground, so he decided to found his city on that spot. 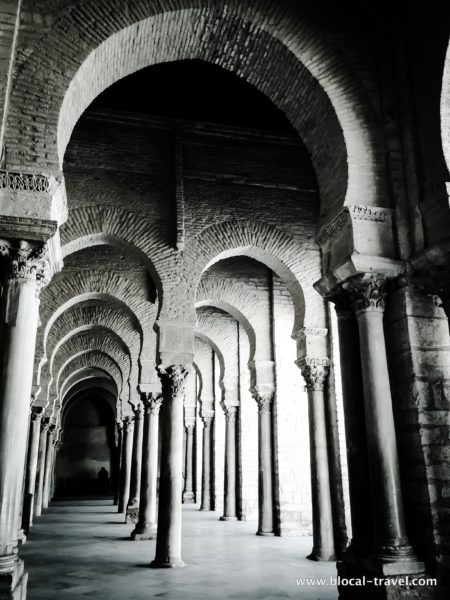 The University established inside this mosque was a centre of education both in Islamic and the secular sciences (mathematics, astronomy, medicine and botany) and it attracted scholars from all over the Islamic World, making it the most remarkable intellectual and cultural centre in North Africa during 9th, 10th and 11th centuries. 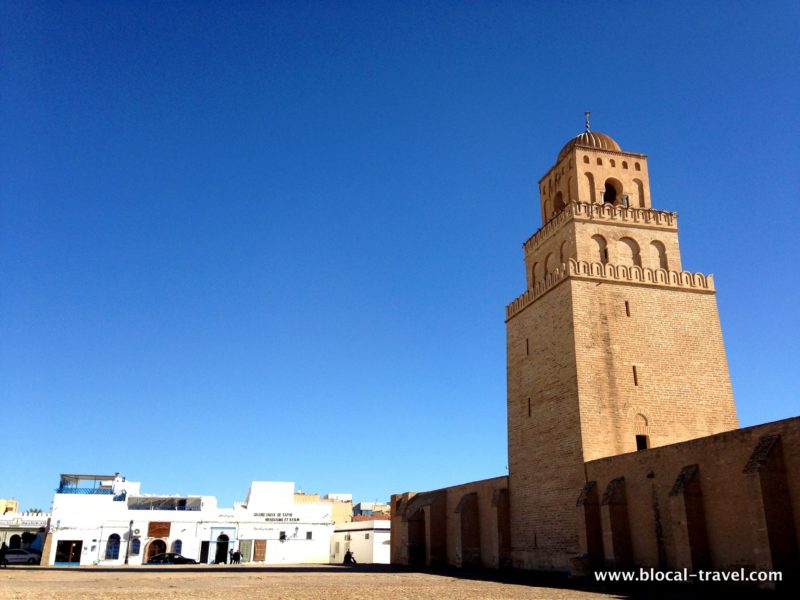 The Great Mosque of Kairouan is so important to Islam that seven pilgrimages to this mosque is considered the equivalent of one pilgrimage to Mecca. 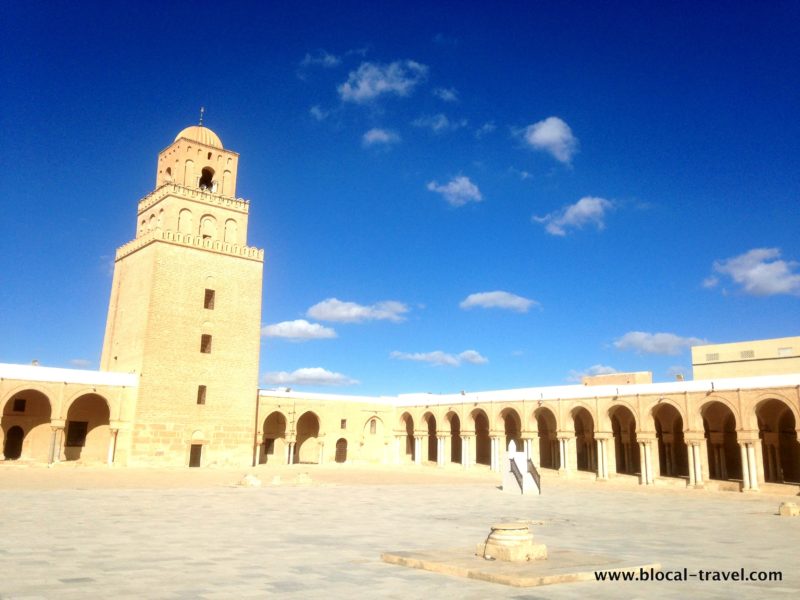 The sundial in the courtyard indicates the prayer times

This open-air water reservoir is made up of two communicating cisterns that date back to the 9th century. They are the only two left from a beautiful hydraulic ensemble that provided water to the town, via an aqueduct that fed the cisterns with water from the Jebel Cherichera mountain 36 km away. It is still considered a masterpiece of Arab hydraulic engineering. 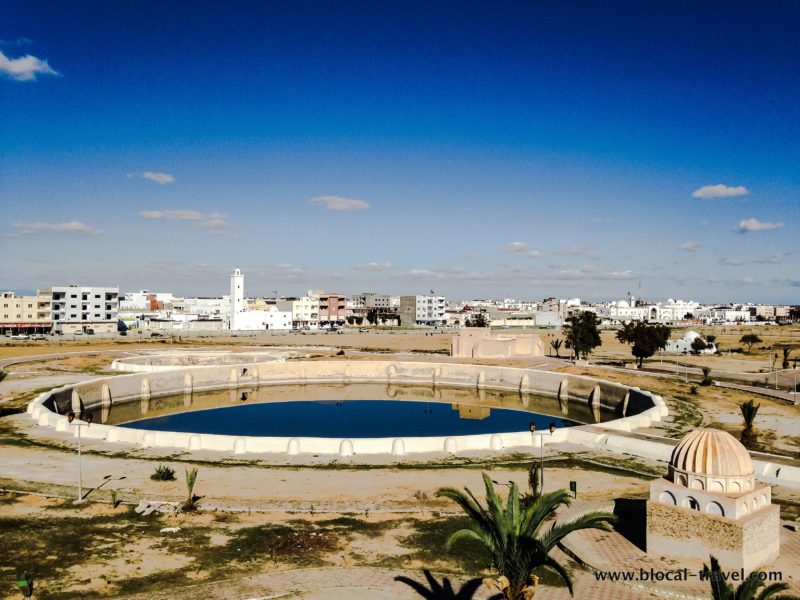 Sipping a coffee aromatized with rose water, we went to the rooftop to enjoy the panoramic view. I sipped and looked at the horizon, where the white buildings and the minarets thin out and the city surrenders to the desert.

Kairouan > The Mosque of the Barber

Dating from the 17th century, this is the veneration place for Abu Zama’ al-Balaui, the companion of Muhammad who saved three hairs of the prophet’s beard, hence the mosque’s name. 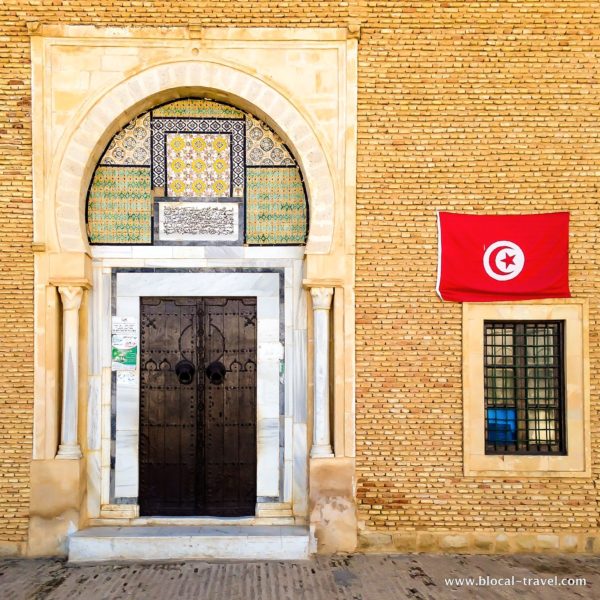 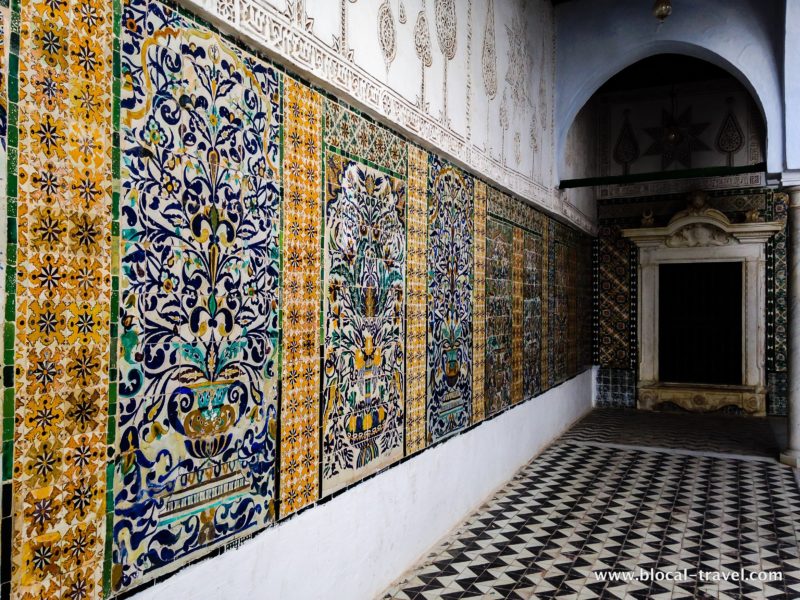 Walking in the shadow of the huge, Andalusian-style minaret, we reached the richly decorated courtyard, whose walls and ceilings are brightly ornamented with blue-green tiles and white plaster stucco, following the taste of the Ottoman dominators. This elaborateness contrasts with the less fanciful form of the Great Mosque.

One of the most impressive buildings in Kairouan is the former house of the governor. Under its painted carved ceilings, local women carry on the ancient local tradition of carpet making, which goes back many hundreds of years. 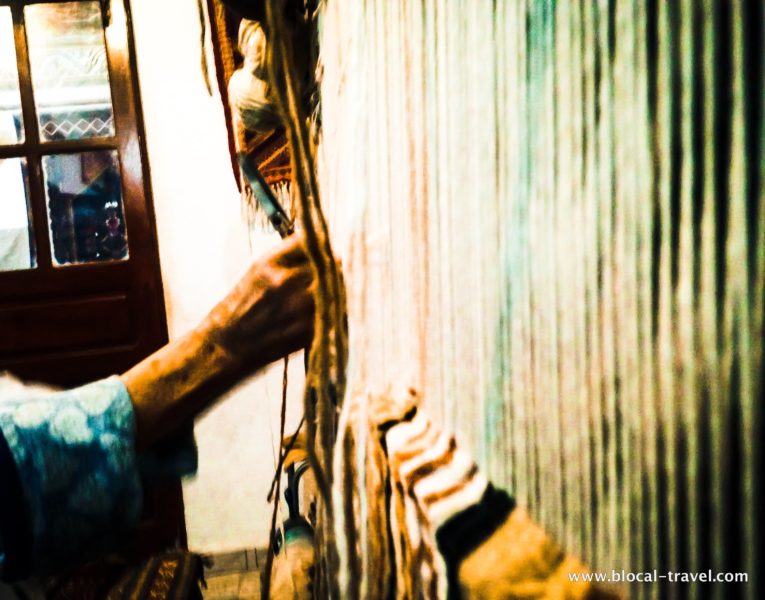 Colourful patterned carpets cover not only the floorings but also the walls of this 18th-century building, which is dotted with small wooden, finely painted tables on which beautiful sets of tea cups await. 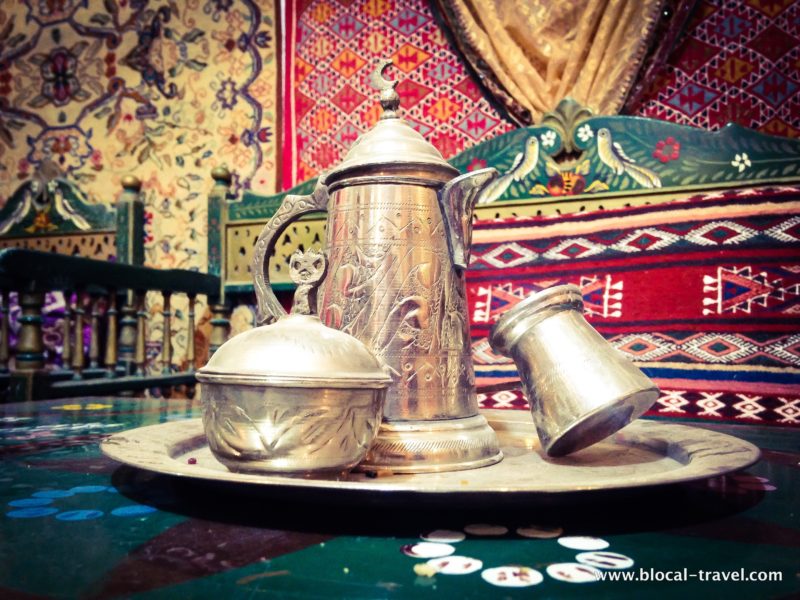 The rooftop of this building made up of a series of tiled terraces connected by stairs and overlooking the old city, whose skyline is punctuated by the tall minarets and the white cupolas of its mosques and zawiyas. 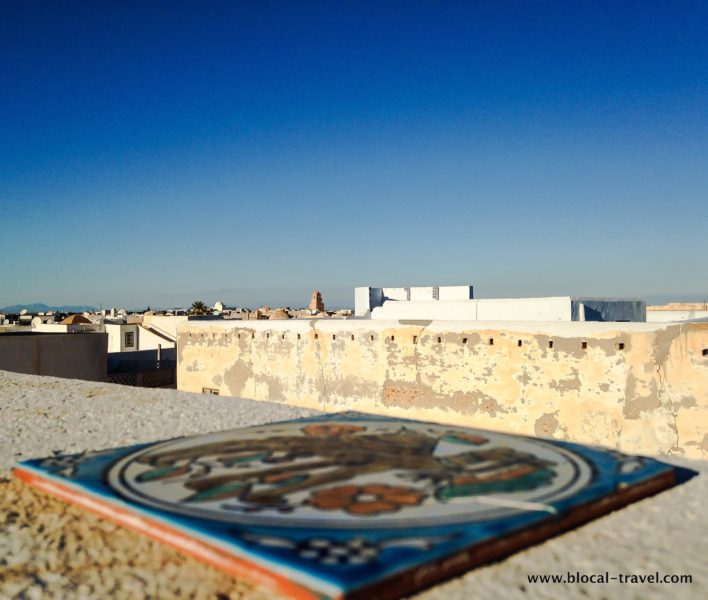 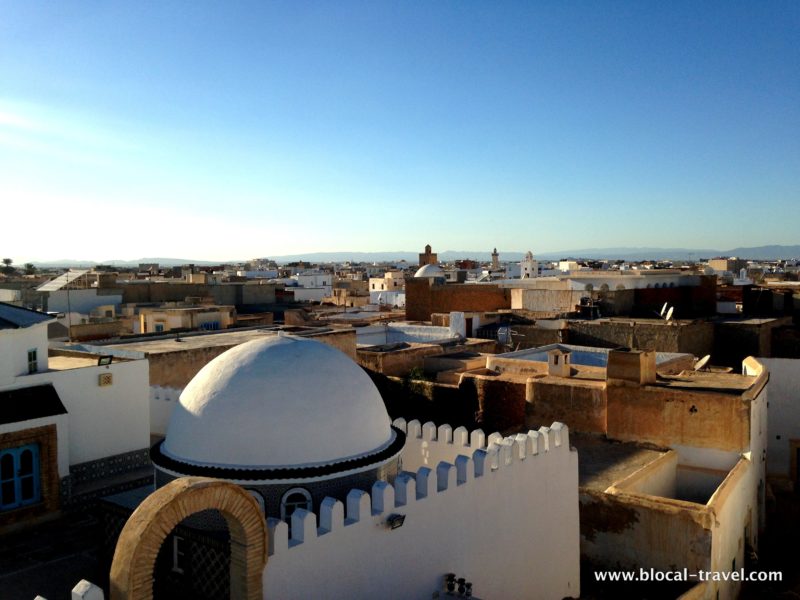 The winding streets downstairs are pervaded with life: children coming home from school run before their veiled mothers, who walk slowly like leaves on the wind.

But, on the flat roofs of the residential houses, the clothes hang still: not even a little breeze in this hot November afternoon.

We ate at this beautiful restaurant inside an 18th-century traditional house. The food was absolutely superb, and spicy as traditional Tunisian cuisine is. Lunch began with the typical Tunisian soup, which is made with lamb, tomatoes and small handmade pasta, followed by Fatima’s fingers: super-tasty fried rolls filled with vegetables. 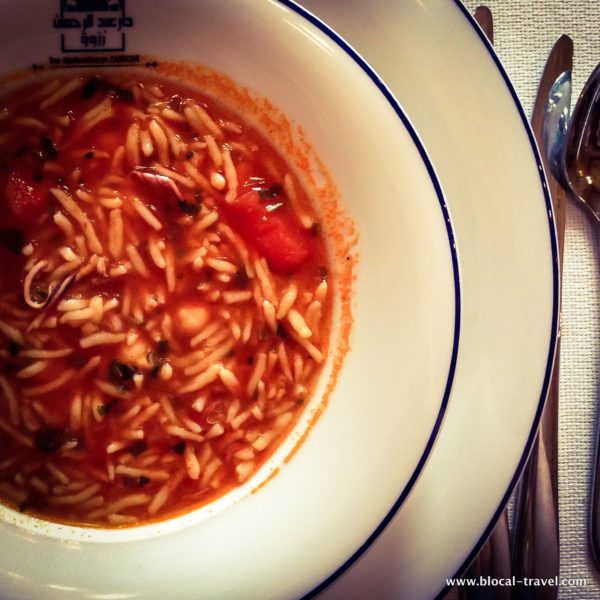 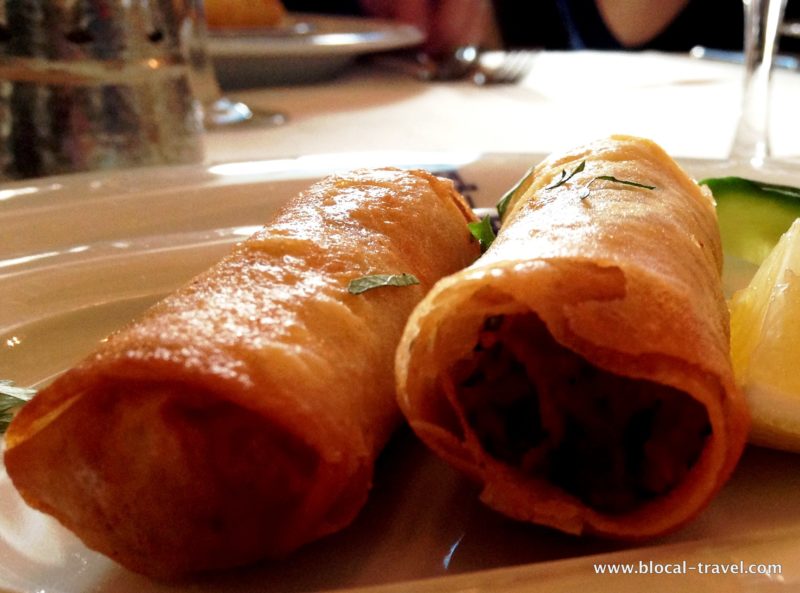 Then we had the ubiquitous couscous and a traditional dessert made with cream. Besides the delicious food, I loved the place itself, especially the sunny patio. 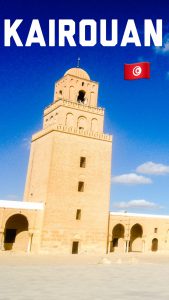 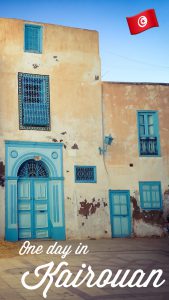