Welcome to Trullo, the hood of street poetry and guerrilla painting 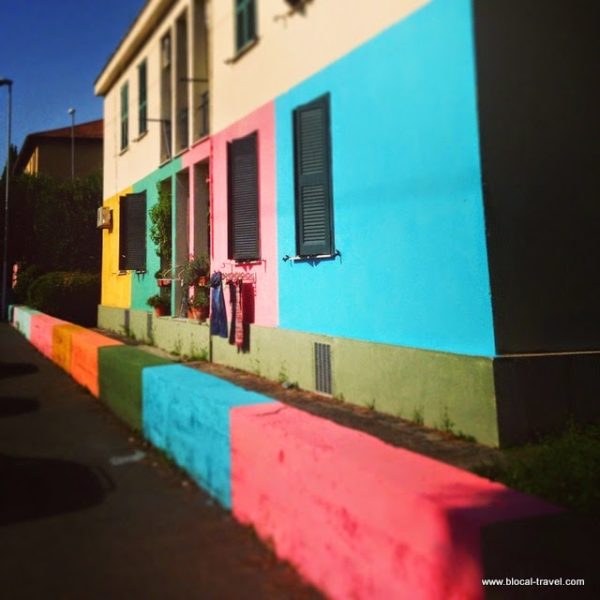 If Pasquino is no longer lampooning from his popular corner near Piazza Navona, the walls of Rome are still speaking in rhymes in Trullo district, a suburb in the western part of Rome, where seven guys are spreading metroromantic poems all around the hood.

In the same area, another group of locals (Pittori Anonimi del Trullo, meaning Anonimous Painters from Trullo) just began repainting Trullo’s social housing buildings in a naïf and very colorful style.
During the latest months, these two independent groups ganged up to make this “garden city” -considered a slum by most- even prettier. On their latest intervention, which happened a few nights ago, the street artist Solo joined the team and realized a crying girl at the corner between Via Massa Marittima and Via Sarzana.
Enough with postponing: I needed to go on exploration!
I already wanted to go to Trullo to enjoy the breath-taking view from Montecucco hill, the ruins where Pasolini shot “uccellacci ed uccellini”, and to discover another garden city in Rome (such as Garbatella and Città Giardino), with the typical social housing buildings and their beautiful courtyards.
My tour started at San Raffaele Arcangelo church. On that sunny Sunday afternoon, the area wasn’t traffic congested, but still vivacious: kids were playing football in the pedestrian area, teens were lazily leaning on the walls of Trullo’s large courtyards, football fans were arguing at the local bar, and old people were just sitting in the main square, silently supervising the overall situation. 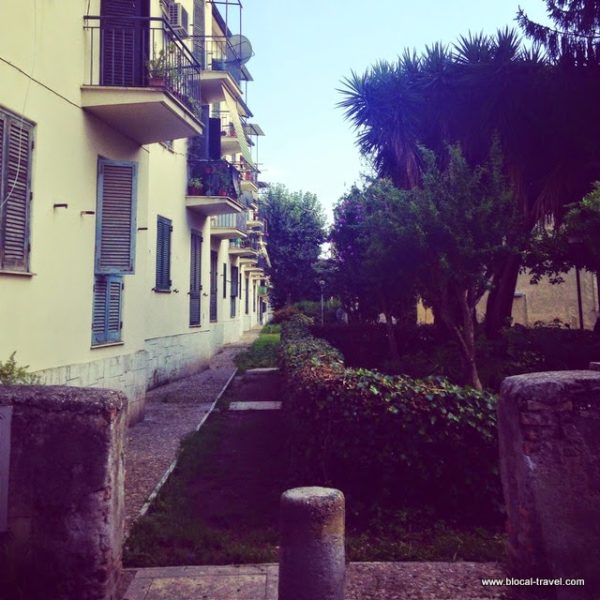 This kind of neighborhood life is part of the charm of Trullo, which -in a truly “garden city” spirit- is a laid-back, friendly community. The area is surrounded by an especially rough and charming Roman countryside (just like the nearby Corviale neighborhood) and it is characterized by public housing buildings from the fascist era.
Trullo is also sadly linked to the criminal organization Banda Della Magliana, which originated in this area during the 1970s, but its violent aura and criminal past were colors-washed for good by the anonymous painters of Trullo’s makeover. Facades, arcades, courtyards and stairs: every spot in the neighborhood got a make-over, transforming the former slum of Trullo in a cheering hood where you can enjoy a pleasant stroll, feeling just like Alice in Wonderland. 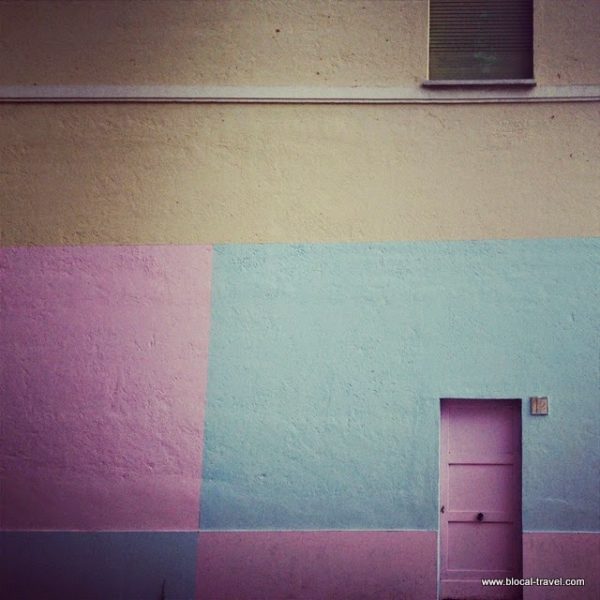 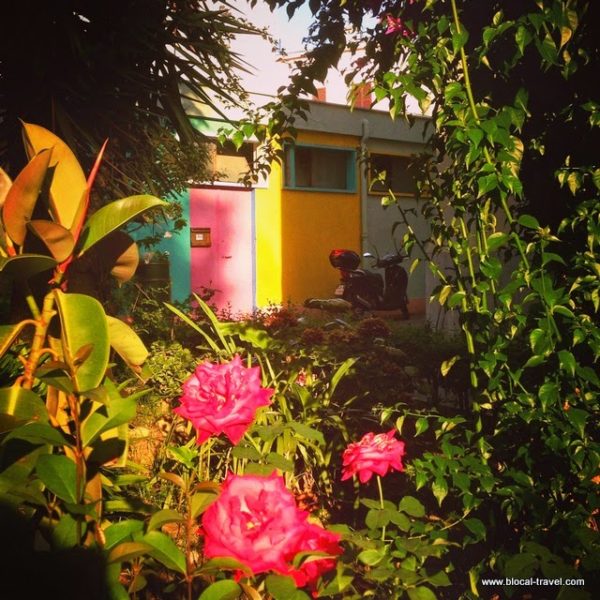 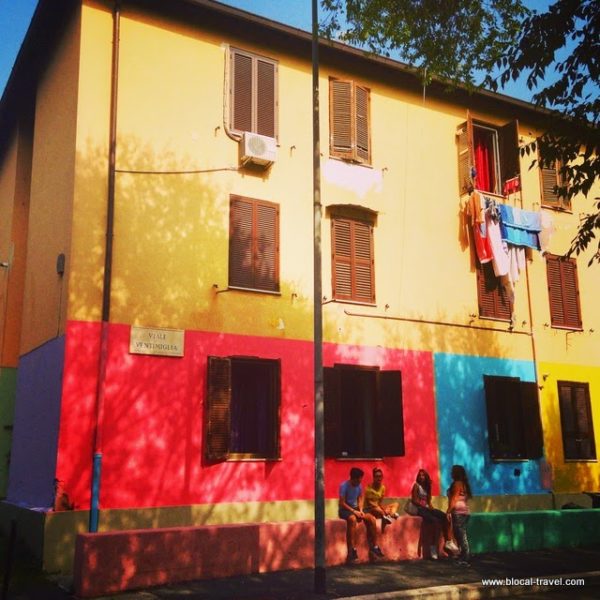 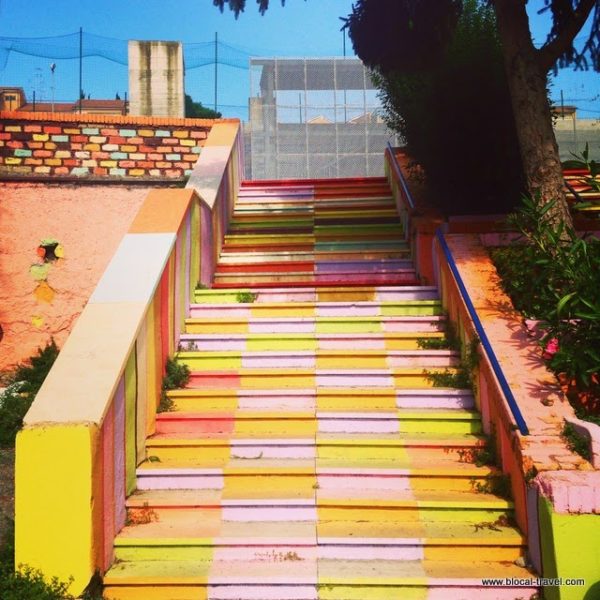 While we were marveling at this new wave of colors that made Trullo almost fairy-taily, a man approached us:
“Do you wanna take a beautiful picture?”
“Sure!”
“Then head over there, at the corner between Via Massa Marittima and Via Sarzana”
I was pretty sure that he was addressing us to “Nina”, the brand new mural that was painted just a few nights ago by Flavio Solo. 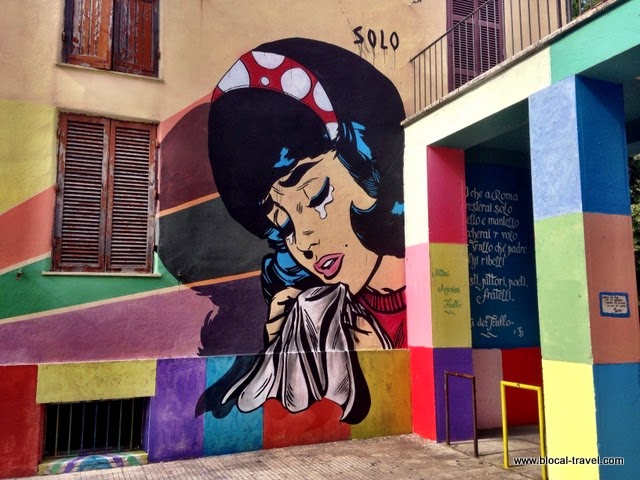 Another local gave us directions to the ruins where Pasolini shot “uccellacci e uccellini”, mixing the actual way to reach Torre Righetta on the top of Montecucco hill with his personal memories from when he used to climb the panoramic slope to play among the ruins with his peers. His stories reminded me of the famous children’s book by Gianni Rodari “La torta in cielo”, which is set on this hill too (such as the movie by Lino Del Fra based on this book).
And so we faced the goats and climbed as far as the most scenic spot on the hill. 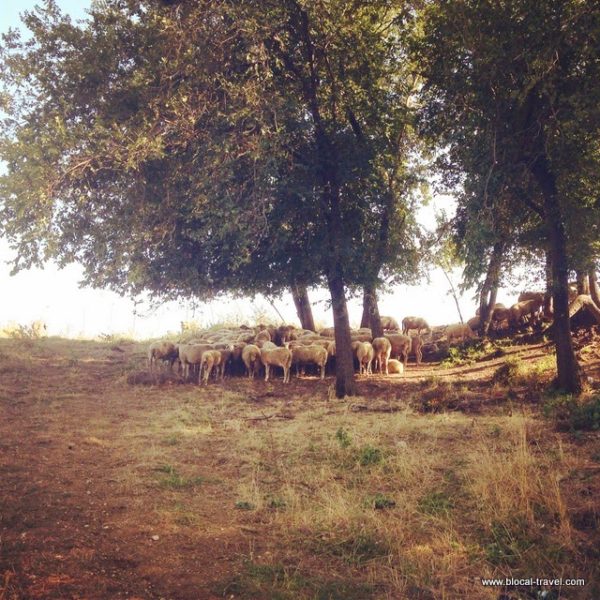 This place is beautiful as everybody says. At that time of the year, the bright blue sky was making the perfect contrast with the dried, yellowish grass. 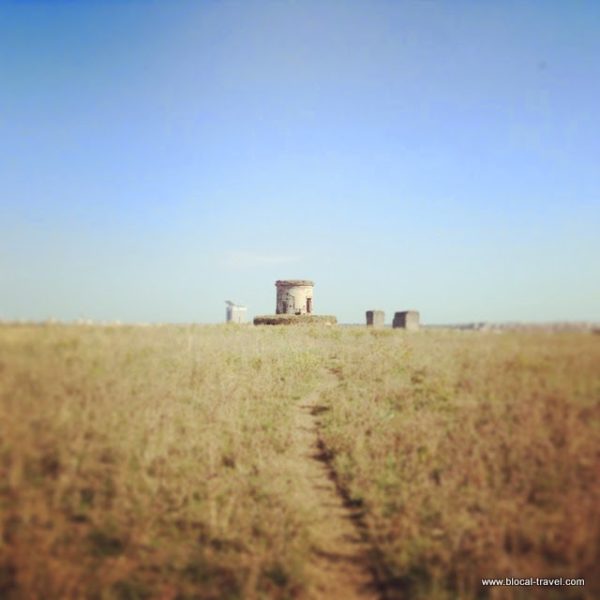 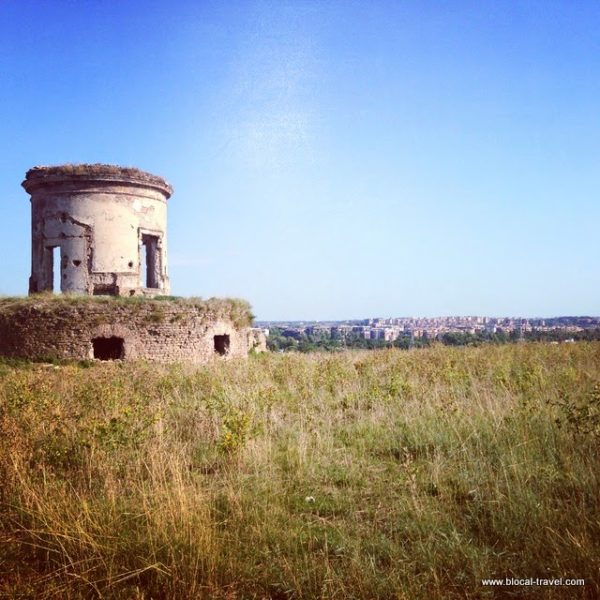 The view from the top of the hill encompasses from Ponte Galeria to Ostiense neighborhood, and it is characterized by skyscrapers, factories, and small suburban houses, as well as Roman landmarks such as the Basilica of St. Peter and Paul, the Basilica of San Giovanni and the gas holder. 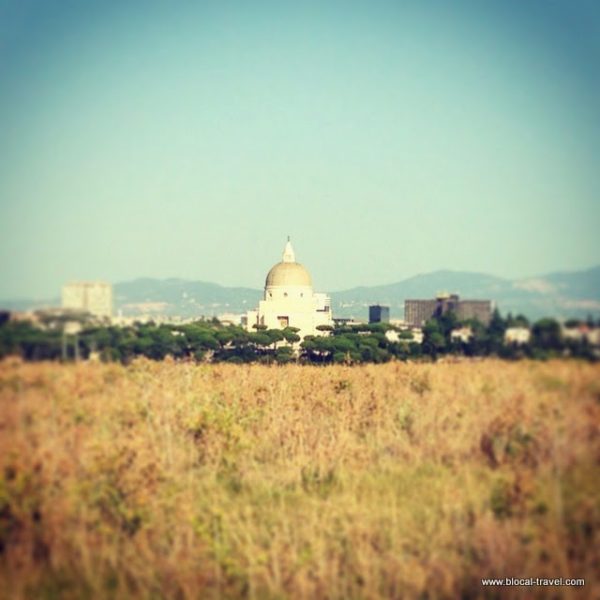 From Montecucco you can also see the most chaotic roads in Rome, among which the G.R.A. itself, but all you can hear from up there is the wind caressing the high grass.
Again, I found myself marveling at how our buildings and human constructions are all relative and fleeting: wild nature came first and will come after. 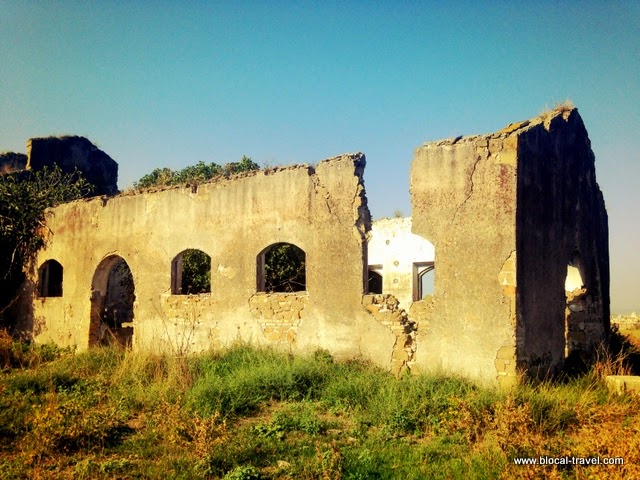 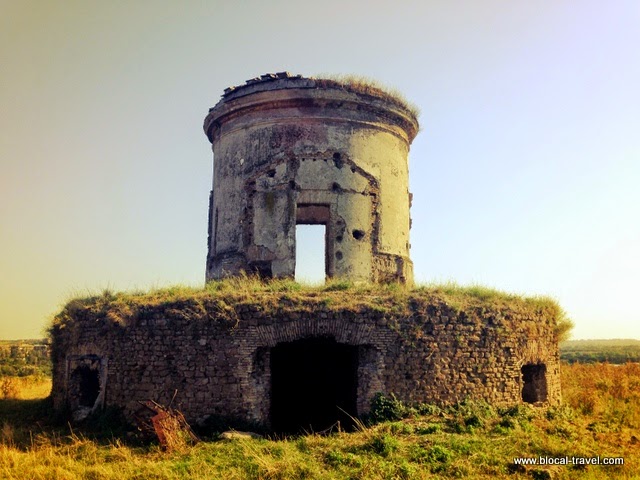 This park is pretty different from the parks downtown: populated with several kinds of animals from goats to horses, here the landscape is pretty rough and the grass isn’t mowed; we walked across a field of stinging Carduus getting hurt by many thorns on our way up to the tower. 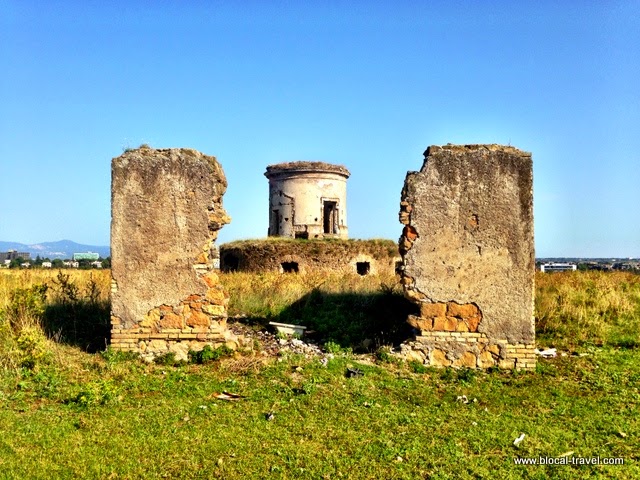 We came back to the main square and headed to Ricomincio dal Faro, a former cinema turned squatted spot, which unfortunately was closed. 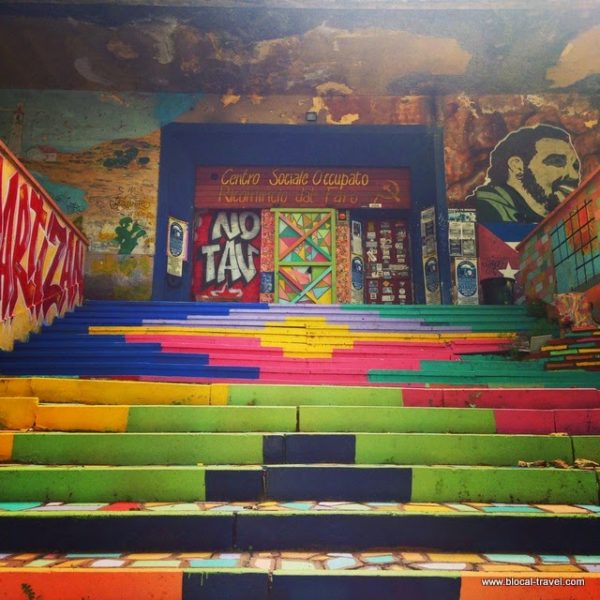 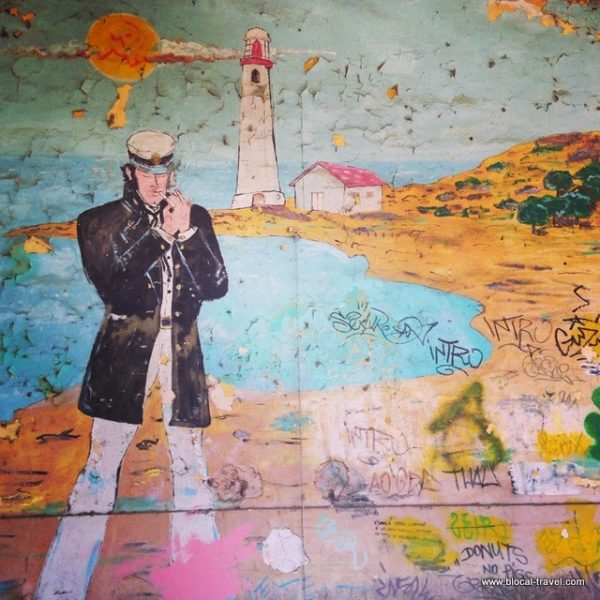 Before taking the bus back to the city center, we had a last tour of the hood, admiring the guerrilla painting which is changing Trullo for good. 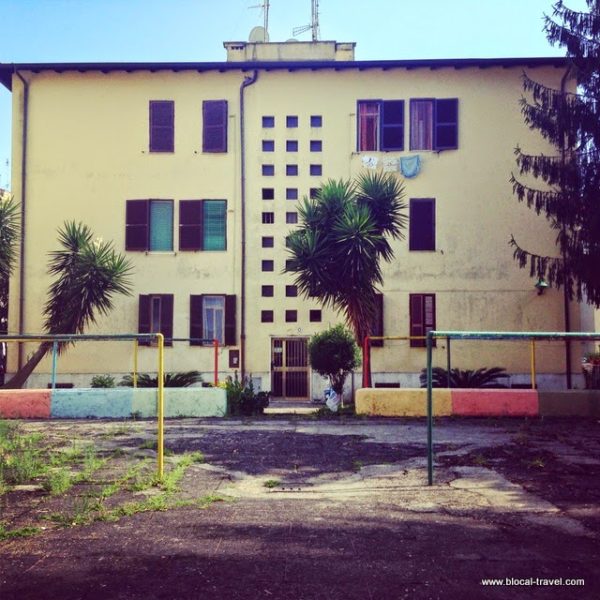 Check out my Rome Google Map to find out about more secret spots in Rome!

Update 2016: I mean to write more about this ‘hood, where a street art festival recently took place. Meanwhile, I shall leave you with this picture I’ve just taken on Montecucco Hill 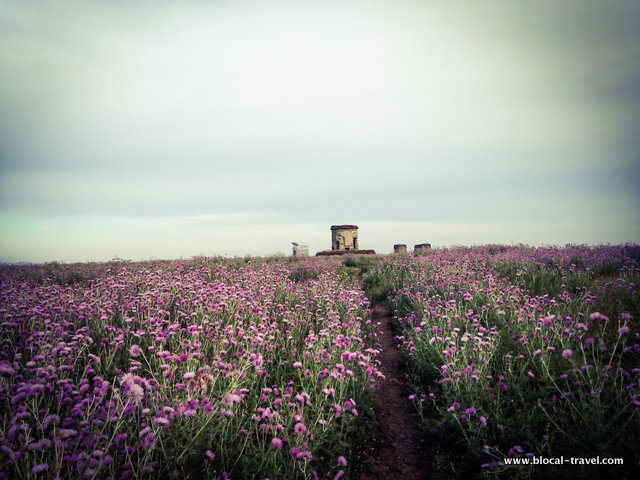 48 overwhelming hours in Serbia… in 48 seconds!

Street Art in Sardinia: Macomer and its Muraghes...