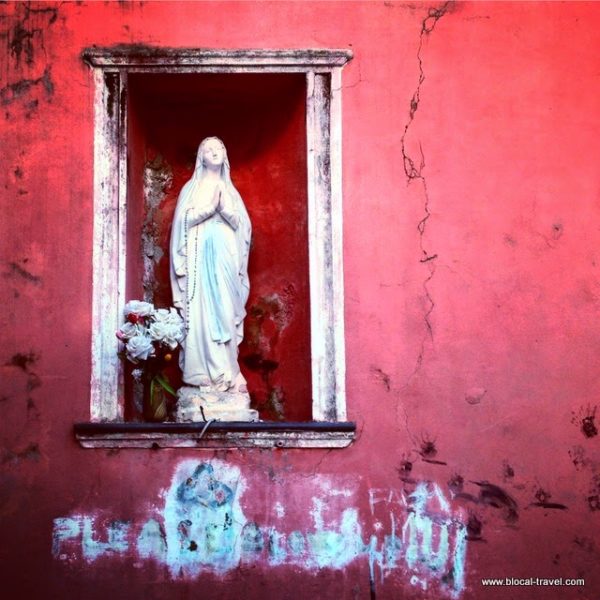 I am not a religious person, but I’ve always liked Christmas because it meant two weeks away from school, or –now- from my desk job (well… it’s actually less than two weeks, but still… it’s holiday time!).
While I am counting down the days to my week in Athens, I decided that I deserved a vacation anticipation and so I organised a day-trip to Salerno with my parents. Thanks to the high-speed train, it took us only two hours to get to Salerno, which made me add it to my list of perfect day-trips from Rome.
I had never been in Salerno before, and this town really surprised me: no littering, no whole families on the same scooter (without helmets!), no horns, no yelling… Salerno doesn’t have a hint of that beautiful chaos characterising other corners of Campania region. Clutched between the mountains and the sea, Salerno is clean and tidy, people speak politely and move slowly… it doesn’t feel like a town of Southern Italy at all! 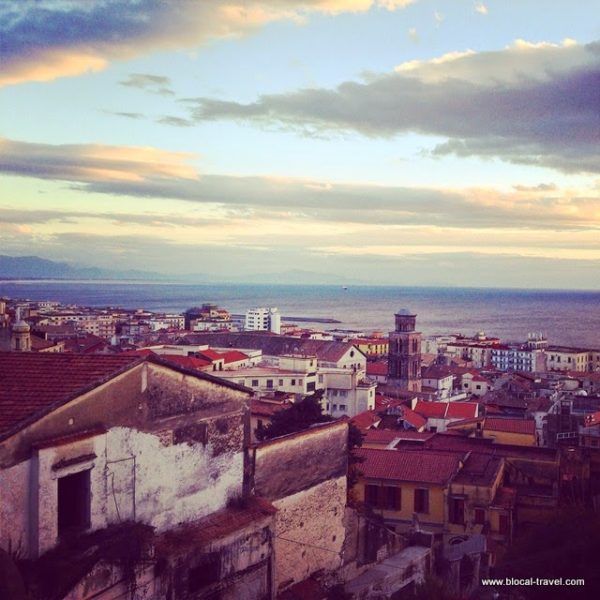 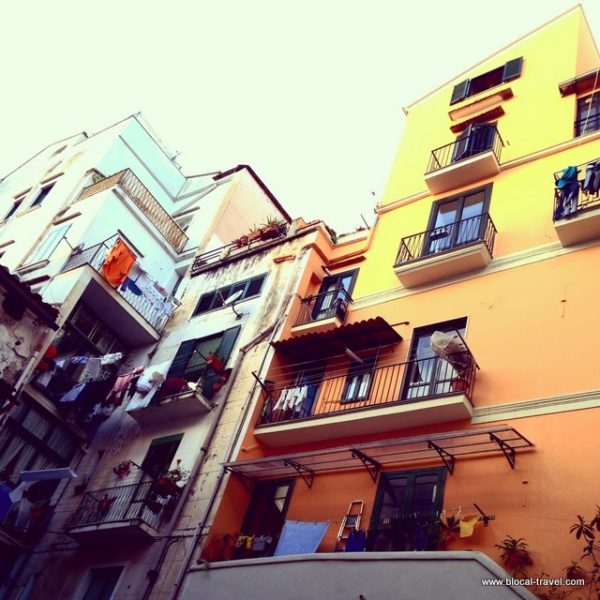 The area was inhabited by the Etruscans and -then- by the Ancient Romans; during the 16th century, Salerno was among the most powerful feudal lords in Southern Italy, and after the unification of Italy it also hosted the King of Italy, becoming Italy’s capital town for a few months in 1943. 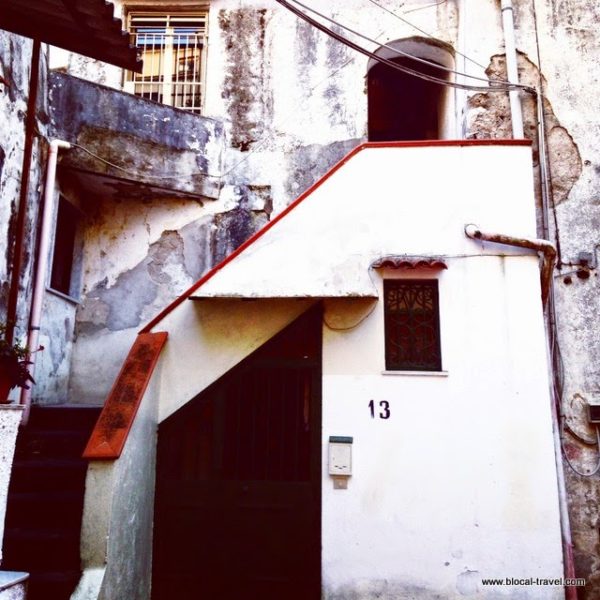 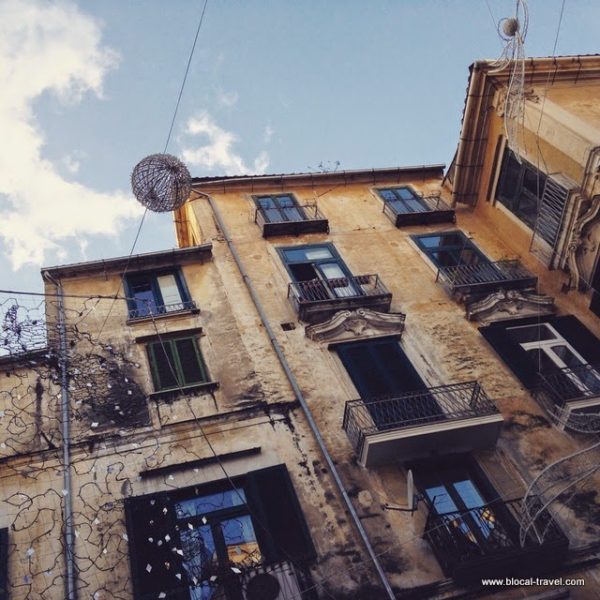 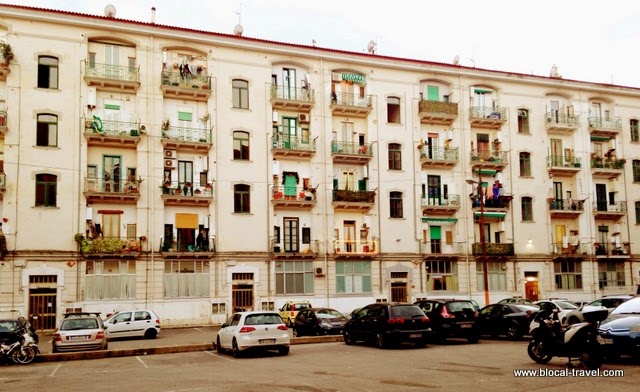 As soon as we got off the train, we went to via Velia to admire Alice Pasquini’s big mural, which was painted in October 2014 for the Fondazione Alfonso Gatto. It is inspired by one of the foremost Italian poets of the 20th century, Alfonso Gatto, whose hermetic poems are painted on the stairs and the lateral walls. Alice’s artwork plays with the staircase (Scalinata dei Mutilati), creating a peculiar spatial relationship between the characters represented, among which the poet Alfonso Gatto himself. 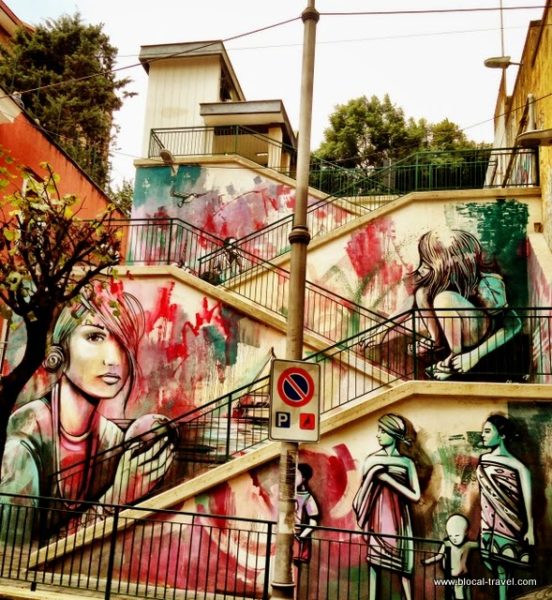 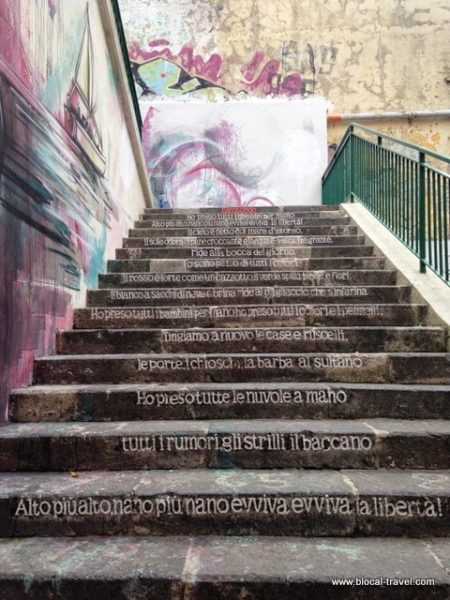 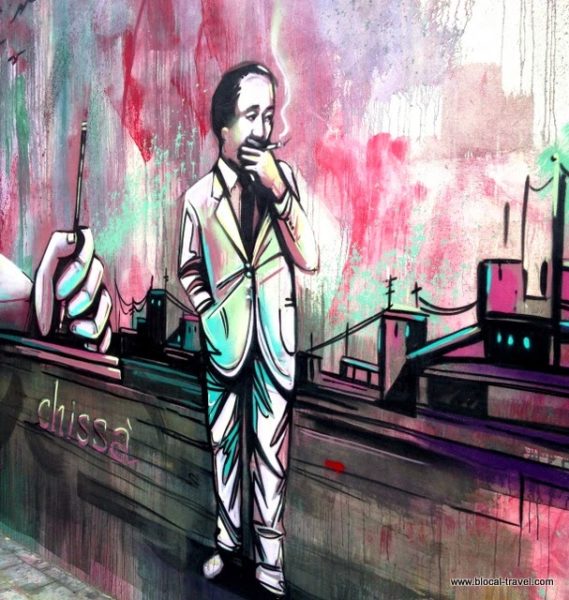 If the tidy town of Salerno doesn’t look so “Campania” after all, where I did notice a full tribute to the regional tradition is at the table. Campania’s culinary art is one of my favourite ones and at 13 Salumeria -a nice restaurant near the harbour- I enjoyed a special holiday menu with the best dishes from the region. 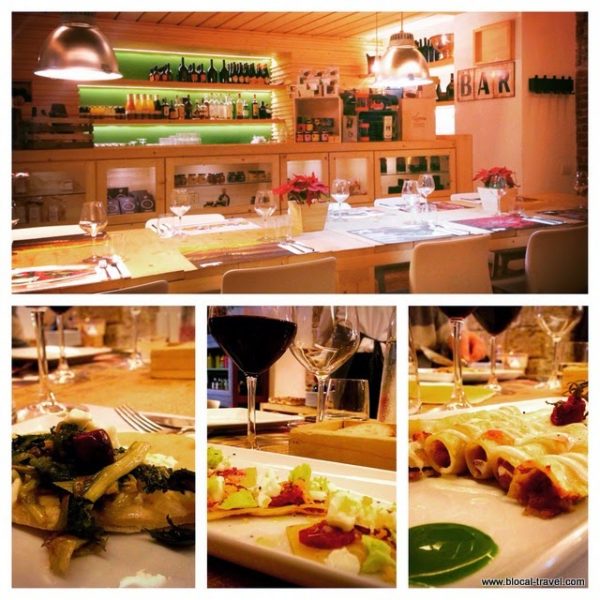 After lunch we had a walk along the seafront promenade (Lungomare Trieste), where the Christmas market was setting up. We wandered around the maze of narrow alleys and characteristic houses of the historic centre, whose architectural plan reminded me of Amalfi, while the ancient buildings’ courtyards and their wide staircases made me think of the charming Spanish district in Naples. 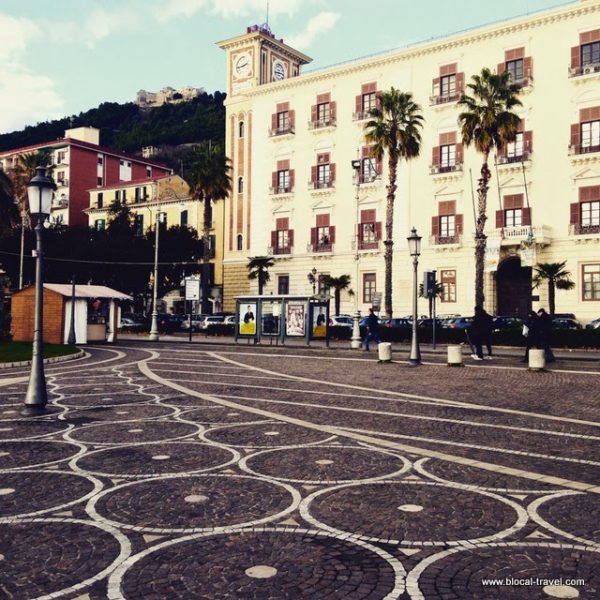 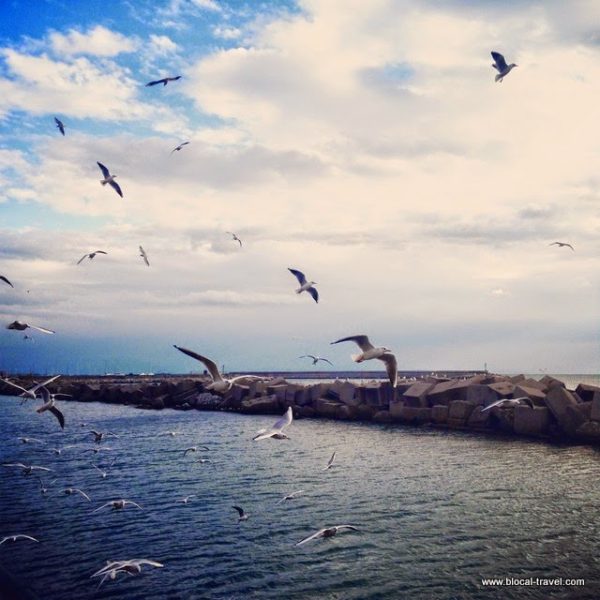 Unfortunately, the Giardino della Minerva (the first botanic garden in Europe, which is also in a very panoramic position overlooking the Gulf of Salerno) was closed on that afternoon, and so we went to the Romanesque Cathedral, built in the 11th century and dedicated to Saint Matthew, whose tomb is inside the Crypt. 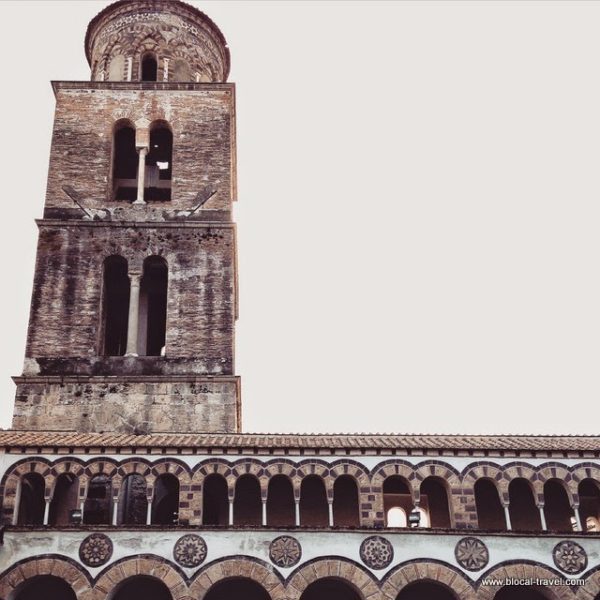 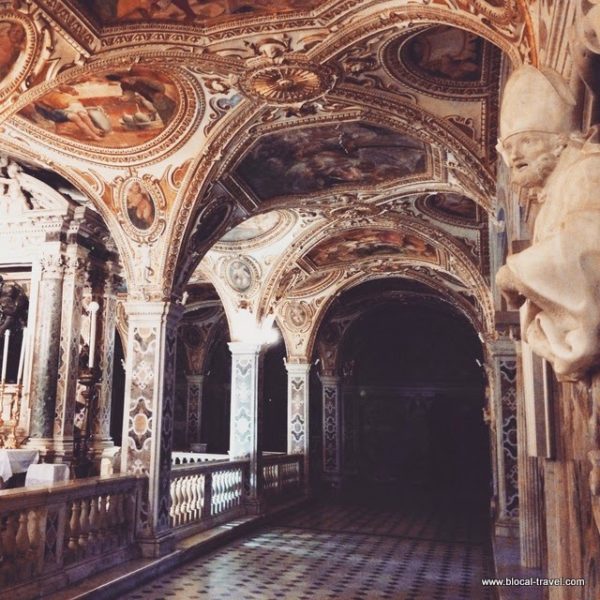 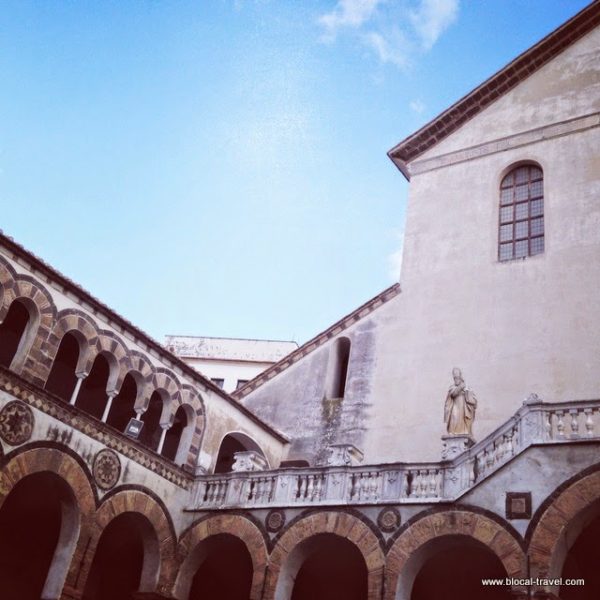 When the sun went down the magic of the lighting art begun.
In the wake of Turin, since 2006 also Salerno is showing off light installations to create a magic atmosphere during Christmastide. 2014’s main themes are Myth, Dream, Seasons and –of course- Christmas. I didn’t manage to see all the lighting installations as we had to catch the last train to Rome, but I did see some light arts for each theme.
Starting from the always fascinating theme of the Myth, I saw Mosaics by Enrica Borghi –made with recycled plastic bottles, an artwork which I remember from the time I was living in Turin- and the Oriental installation made of cherry blossoms and Chinese lamps named Shanghai. 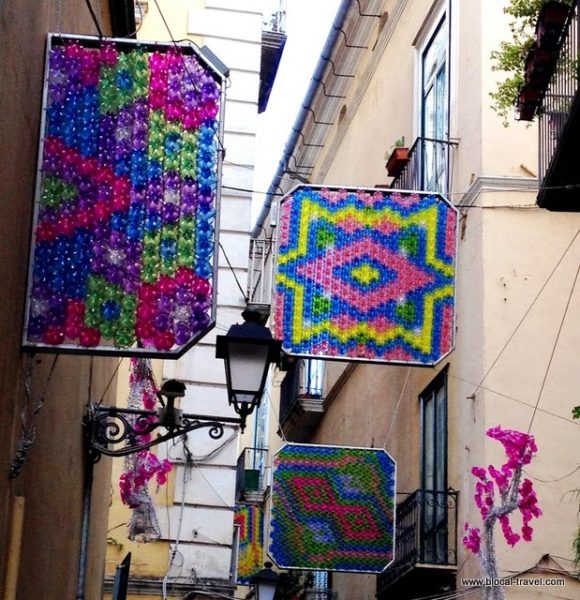 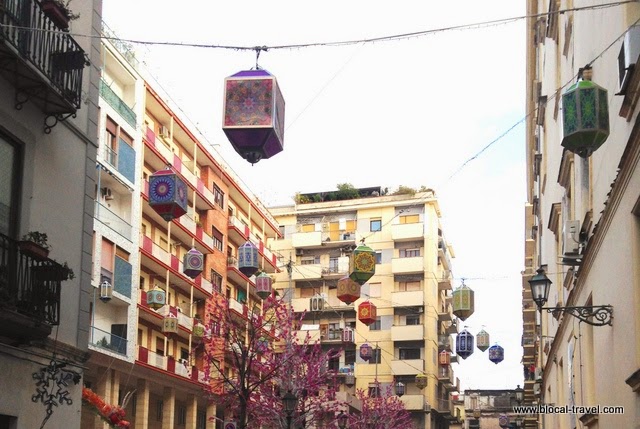 Dream-themed I saw Cyrcus by Luca Pannoli, the Solar System and the Fairyland Garden, which develops from the narrow alleys of Salerno historic centre towards the Villa Comunale (Municipal Gardens), where the biggest and most fantastic installations are located, some of which inspired by the fairy tales of Cinderella and Peter Pan. 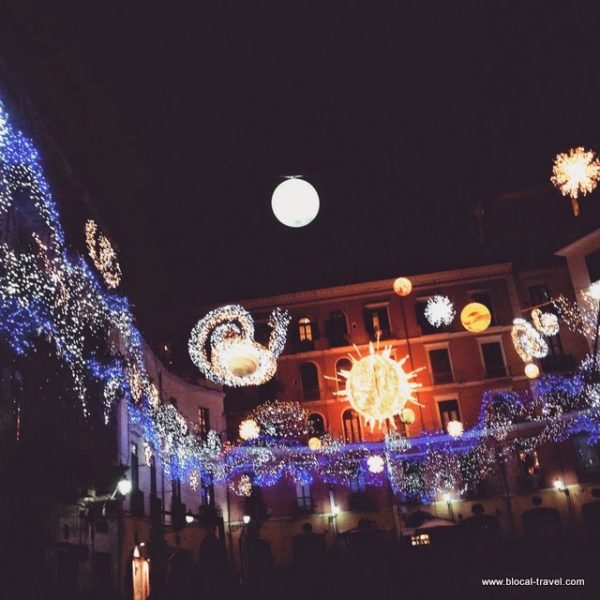 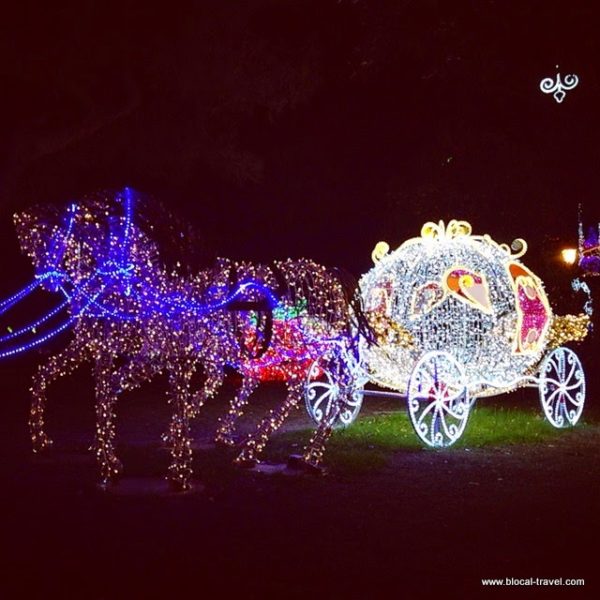 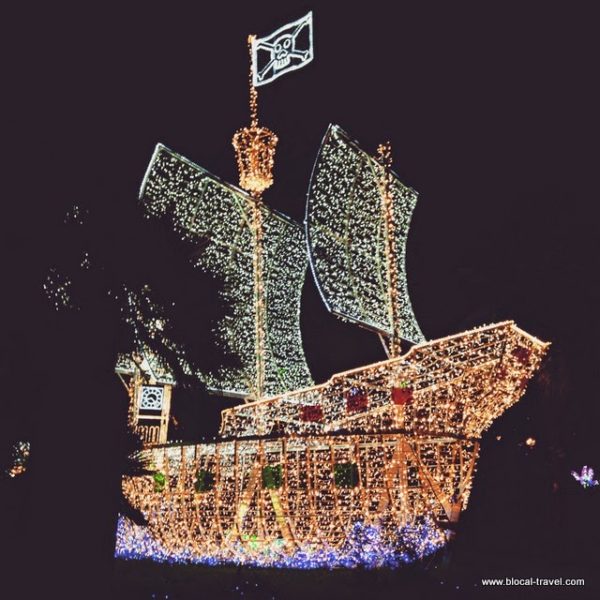 Inspired by the theme of Seasons, I saw Aurora Borealis on Corso Vittorio Emanuele -one of the main installations of the project-, the Winter Garden, a square where the atmosphere is frozen on a white winter day, and my favorite installation –Antartide– featuring a colony of penguins on the rocks of Salerno’s harbor.
(Unfortunately, I couldn’t get on camera the final effect, when the lights are on, but you can still see how lovely these penguins are from a picture I took during the day). 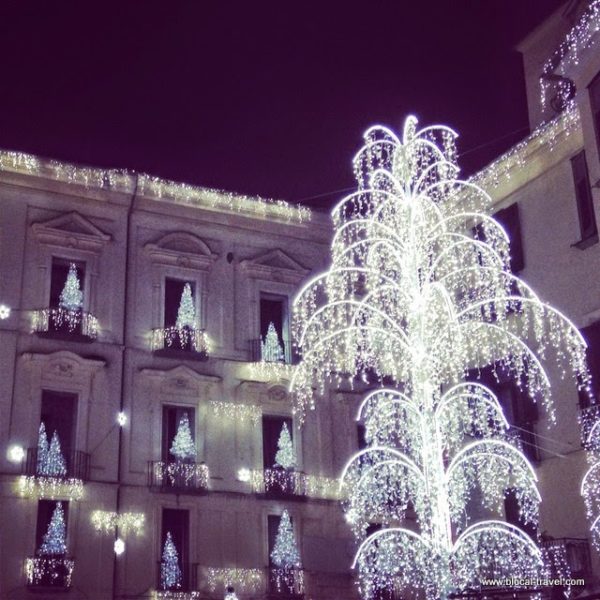 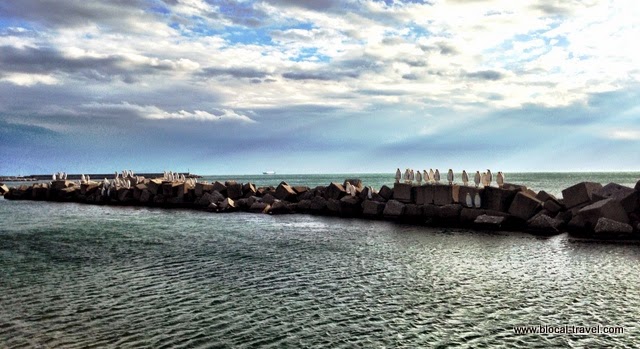 Of course, some of these Christmas lights are also actually about Christmas: there is a huge Christmas Tree on Portanova square and a Biblical Trilogy by Eduardo Giannattasio on three different churches. I saw the Annunciation on Chiesa del Sacro Cuore, which –by the way- is worth a visit also for the beautiful Presepe staged within the church. 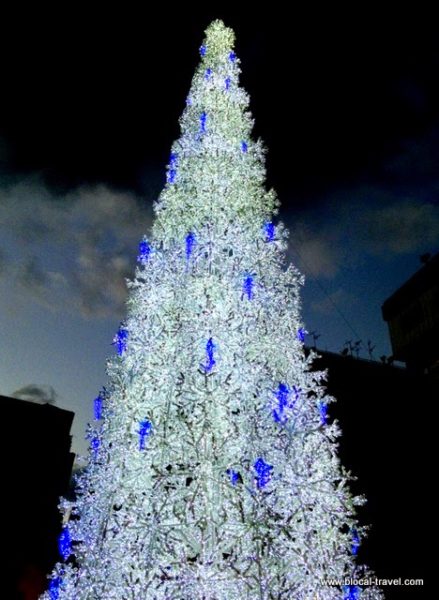 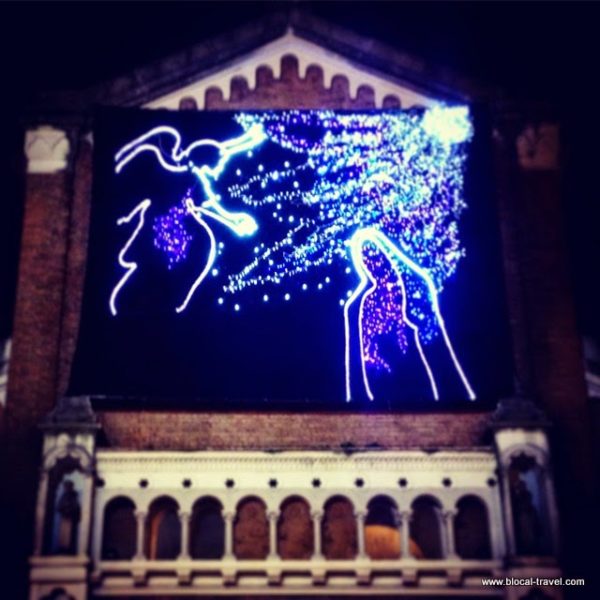 And so, even if now I’m leaving for Athens with the tremendous cold I got by wandering all day long around Salerno, I must admit that it was definitely worth it!
You can hover over these (or any image) to quickly pin it! 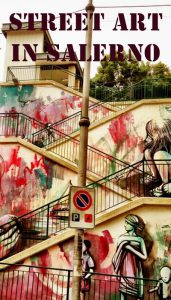 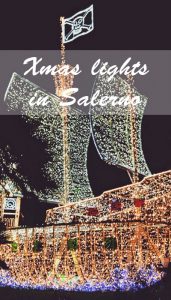 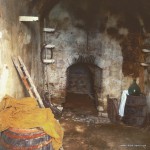