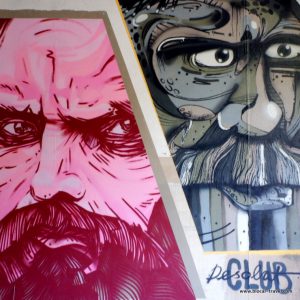 Despite the fact that 100+ artists are painting, building, welding and creating non-stop since one week, the former VEB Spezialmaschinenfabrik is so huge that for the whole time there has been plenty of empty corners waiting to be claimed. Therefore, the artists have had the opportunity to experiment, collaborate and go beyond their usual work, since once the ‘main piece’ was done –and consequentially the performance anxiety was gone- this huge empty space appeared to them as full of possibilities.

As many artists pointed out, IBUG isn’t meant to do something well executed. IBUG is meant to experiment new things and push yourself out from the comfort zone.

And this is exactly what happened in the second half of the week, when everybody began roaming around the abandoned factory to find a second, a third and a fourth wall to paint. 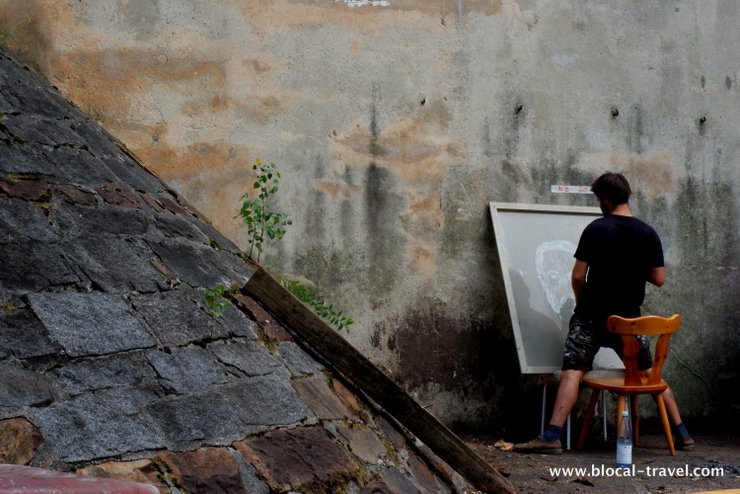 Wasp Elder, right after saying that he won’t do a second piece

And you know what? Once they have found their new wall, they painted it in a braver way: experimenting and collaborating. Now that the ‘pressure’ was buried under that thick layer of paint that covers their first piece, the remaining days were meant to try out something different, check out each other’s sketchbooks, get more paint on their hands and do a bit of healthy bombing together.

Sometimes it also happened that, after experimenting on a second, third, and fourth wall, they came back to their first project fuelled with new ideas. 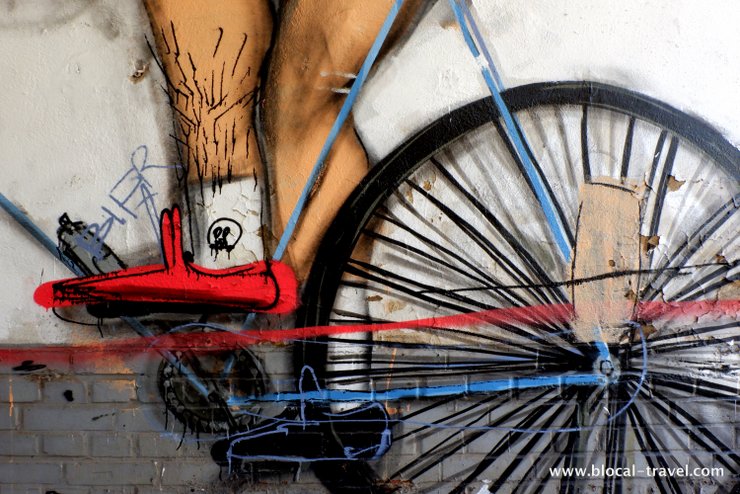 I can tell you that this feeling of ‘nothing is done, everything is a work in progress’ is what makes this festival so special: artists aren’t here to show their own artworks, they are here to be part of the IBUG creative family and build something powerful together.

Almost everybody arrived at the factory without a sketch, not even a vague idea of what they were going to do. They knew they would have been inspired by the location.

Many of them are working on themes such factories, workers, industrial production, meat production and slaughterhouses, economic crisis, decay and abandoned places –all topics strictly related to the history of the VEB Spezialmaschinenfabrik.

One of the most site-specific pieces is by Orm & Dream. They found a couple of walls with some spray-painted love messages and worked on those by saving some parts of the original messages and writing the rest with a lovely calligraphy –along with filling the whole area with their surreal characters. 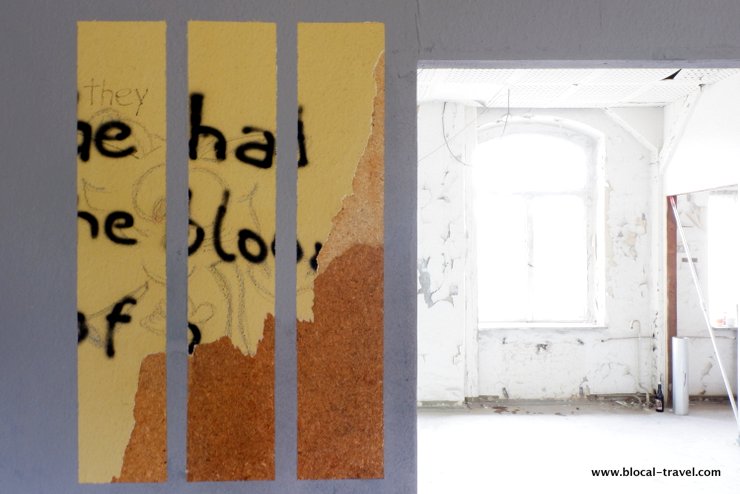 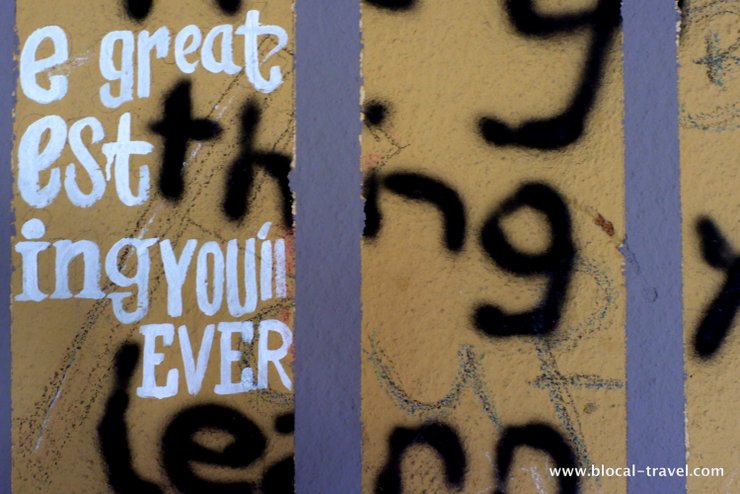 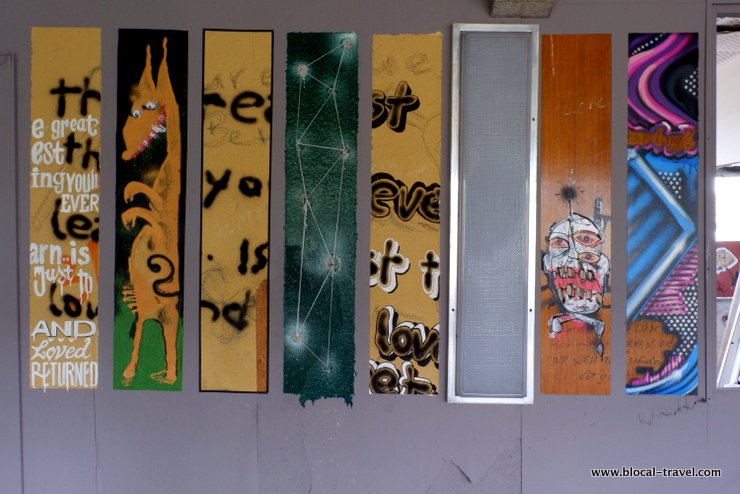 Likewise, one guy outta the FZGG Crew (which stands for “Freizeitgruppe Gestaltung”, literally: a group of free-time designers) saved a rectangle of the old, graffiti-covered wall and framed it with a shadow effect that makes it stand out.

A few hours after the piece was done, there was already someone taking a picture of it: it’s a character built like those composing the FZGG’s installation next-door (and so figures in paper and wood obtained from photos). 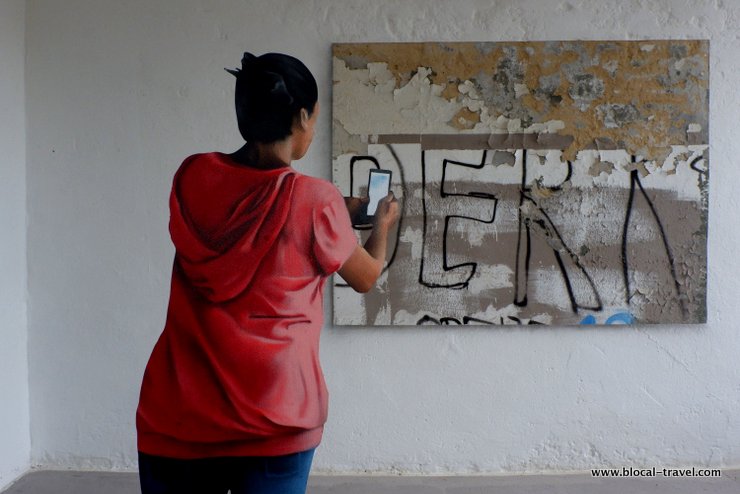 And this is just one of the many creative mash-ups that have arisen during the making of the IBUG festival.

From the ‘Wall of Fame’ at the entrance of the factory, where everybody has drawn something or –at the very least- left his tag, to more thought-out pieces, collaborations arose spontaneously throughout the whole week, over a bottle of IBUG beer. Artists just happen to be inspired by each other’s works on so many different levels! 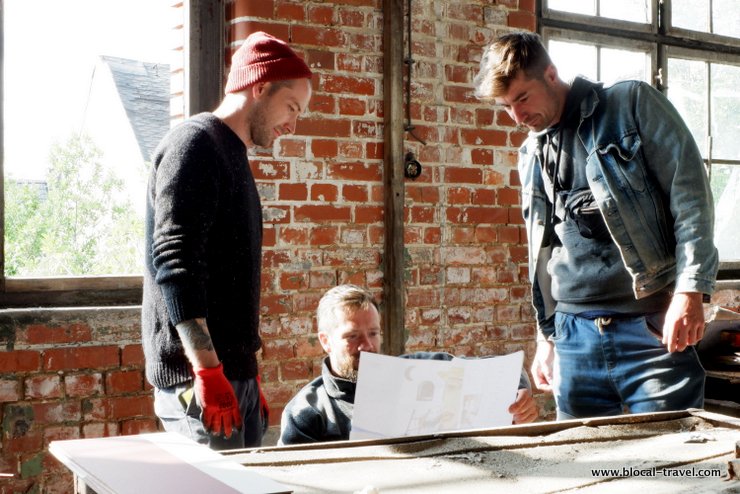 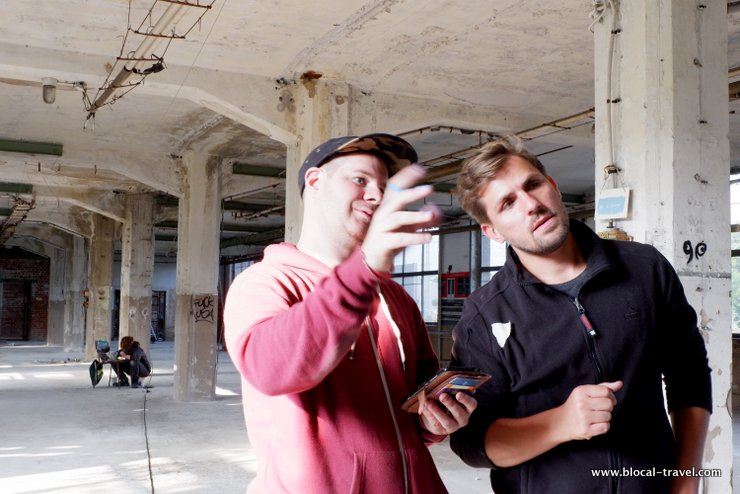 Just to give you the idea of what happens here: a few days ago, a pole dancer felt inspired to perform inside Kenneth Letsoin’s installation!

More often than pole dancing, artists scout the place together looking for empty corners that will suit what they are brainstorming in that very moment. This happens continuously, and in a very spontaneous way.

“Usually, collaborations aren’t easy, you should find the right person… but here at IBUG they happen so spontaneously!” Luca Di Maggio told me, after having painted on one of the wooden panels in the beer garden –a special project “curated” by Kenneth Letsoin. 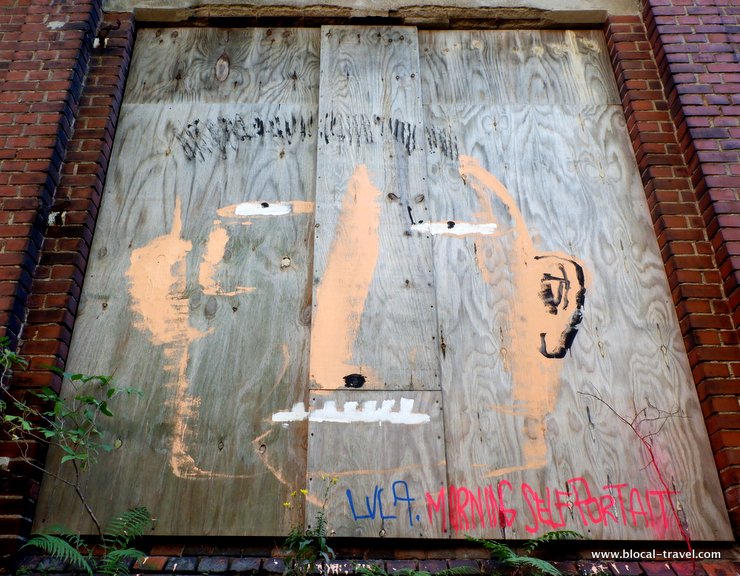 Between his 100th and 101st wall, Kenneth (who -at this point- has gone beyond ‘prolific’ towards ‘totally crazy’) asked everybody to paint something on the wooden panels of the beer-garden-to-be. They could paint whatever they want, but using all the same neon colours. So far, Luca Di Maggio, Dima Fatum, Billy Colours and Peter Fahr have accepted the challenge and painted next to Kenneth’s bright-coloured piece… I’m curious to see who else will join the neon project. 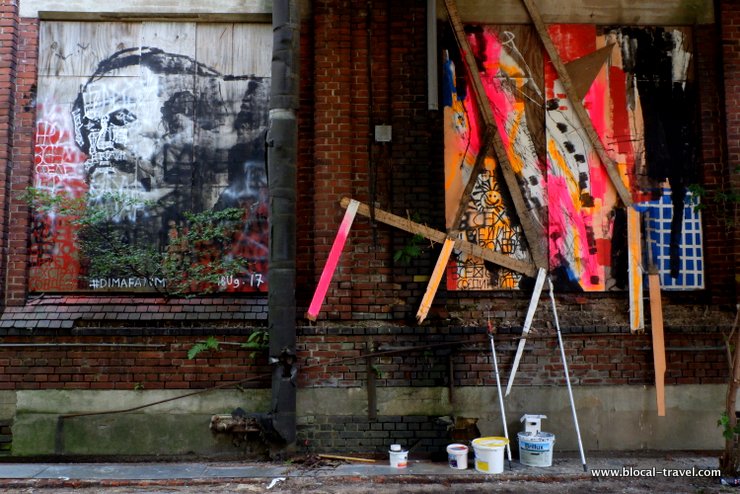 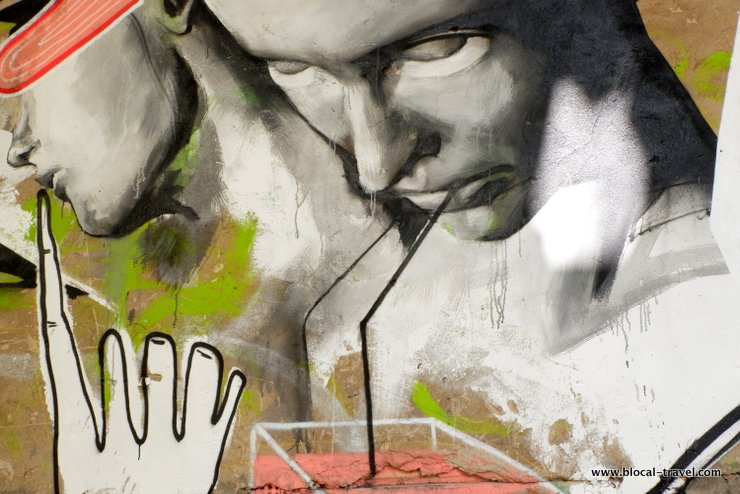 Another interesting collaboration is happening on the big wall in the courtyard, where the Mexican Eva Brancamontes and the Spanish Koctel are painting together for the very first time. This collaboration arose spontaneously, as they both fancied the same wall. This huge wall was in a pretty bad condition (it took them three days just to prepare the wall), and so the optimal solution was to join forces and face the big wall together. Even in two persons, now they are spray-painting non-stop to cover the whole surface in time. 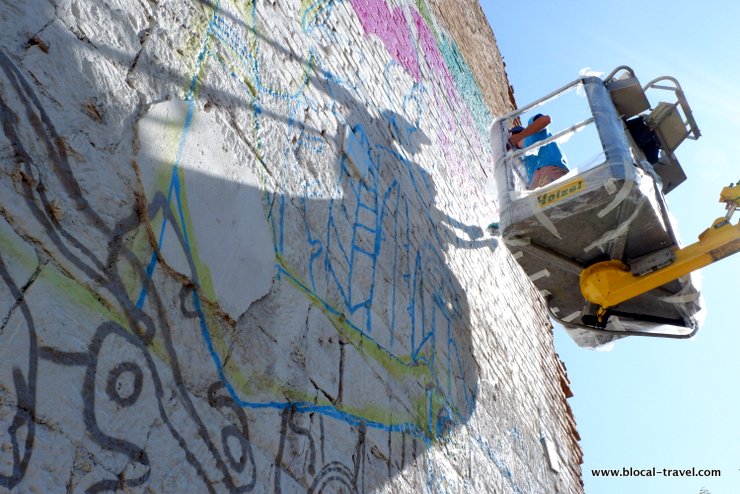 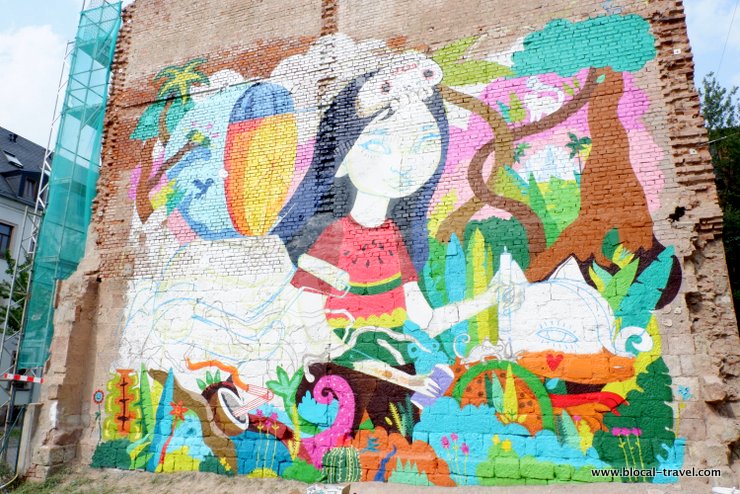 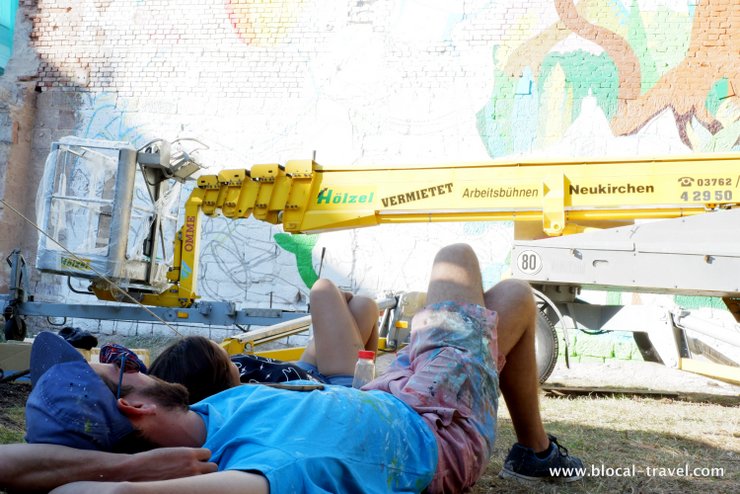 “I see it as a music band: everybody has to get to play their instrument, otherwise it won’t work” told me Gunther, an artist who is used to collaborating a lot –although this is the first time he works with both Robin and Jamtje as a trio, which goes under the name of Tropical Heins. They are recreating a meat factory, a common vision they had from the very first moment they stepped into the attic. 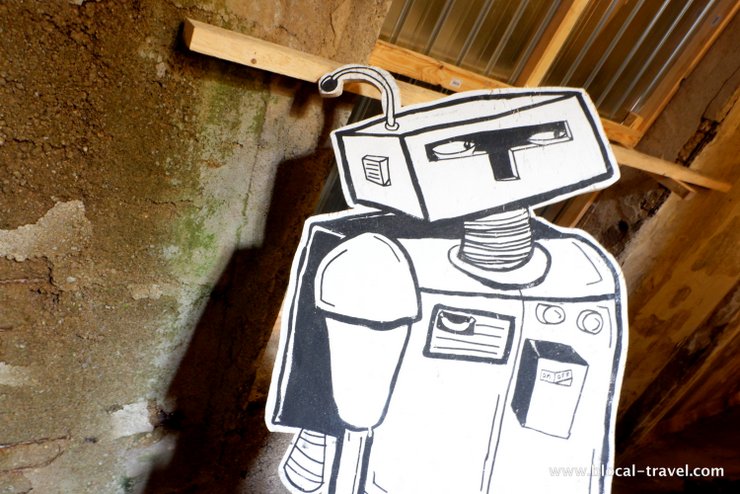 Collaborations arose between different disciplines too. This is what’s happening inside Guido Zimmermann’s room. He got one of the best rooms, the one with the hooks from the former slaughterhouse, on whose walls he painted the ‘Circle of Life’. Now, his animals are coming to life thanks to the video mapping effects by Dimitri and Stephan. 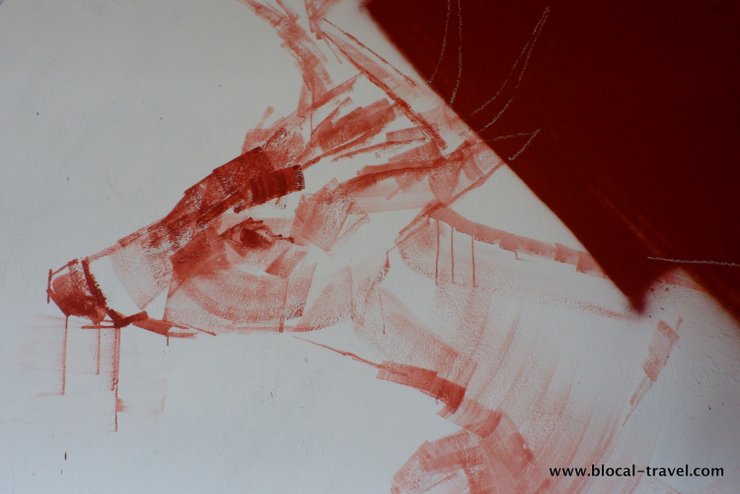 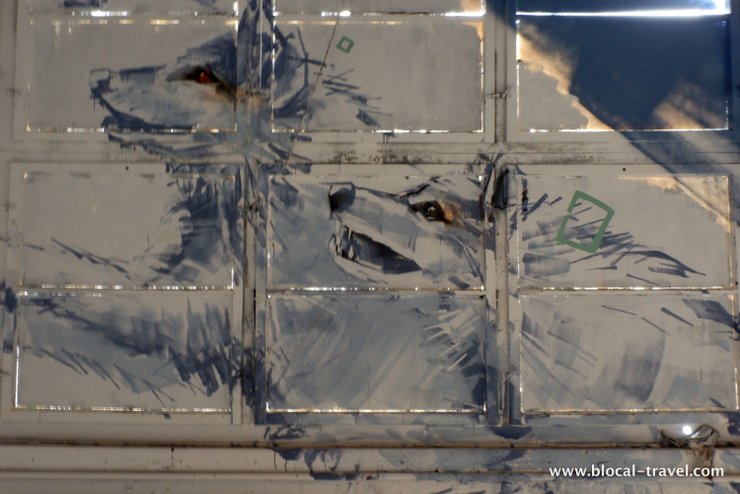 And I could keep writing for hours, as almost every artist has created a second piece with someone else! 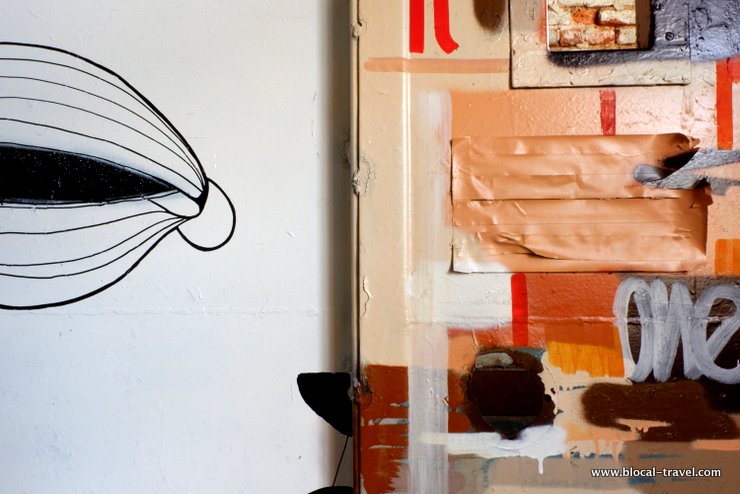 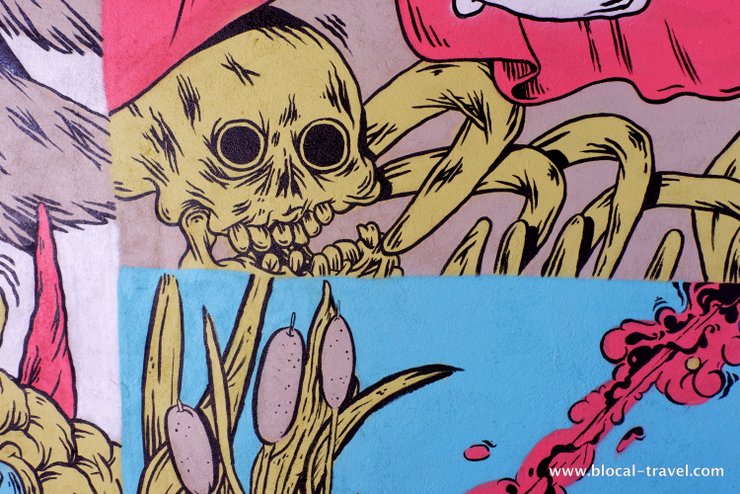 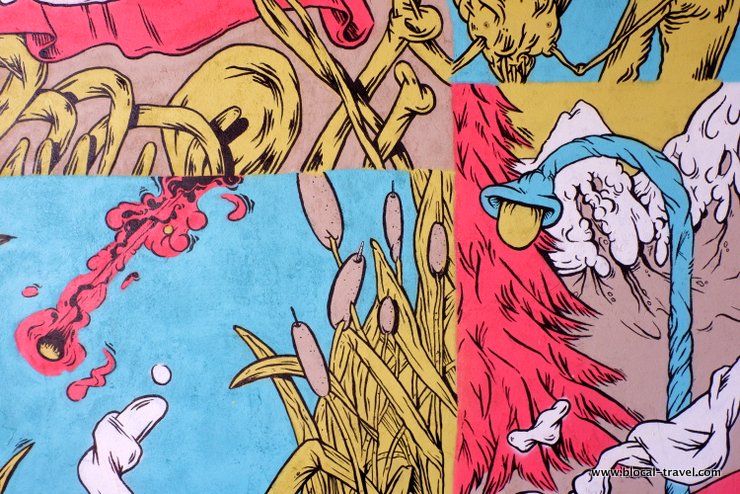 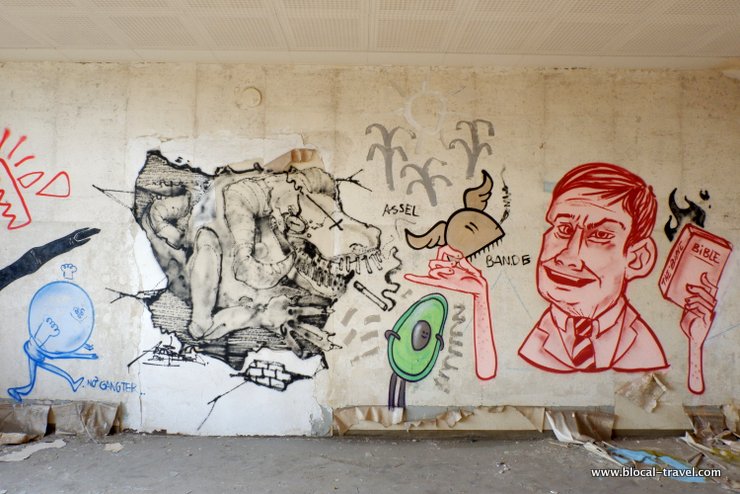 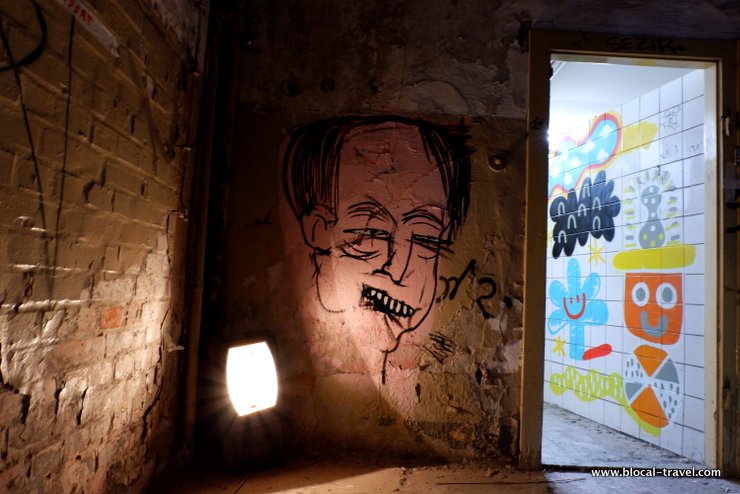 This creative energy is so overflowing that it even spilt over the factory.

Artourette scouted the whole surrounding area to place his characters, until he created one of the craziest pieces in the festival: a path through a narrow alley between the back of the factory and the railway dotted with warning messages.

The Ukrainian duo made up of Dima Fatum & Maria Uvarova went as far as downtown Chemnitz to paint a large-scale mural on the side of a residential building.

This piece is majestically executed, with lots of amazing details, and it took them only two days to paint it (since they were eager to be back in the factory to enjoy some more creative vibes with their fellow artists). 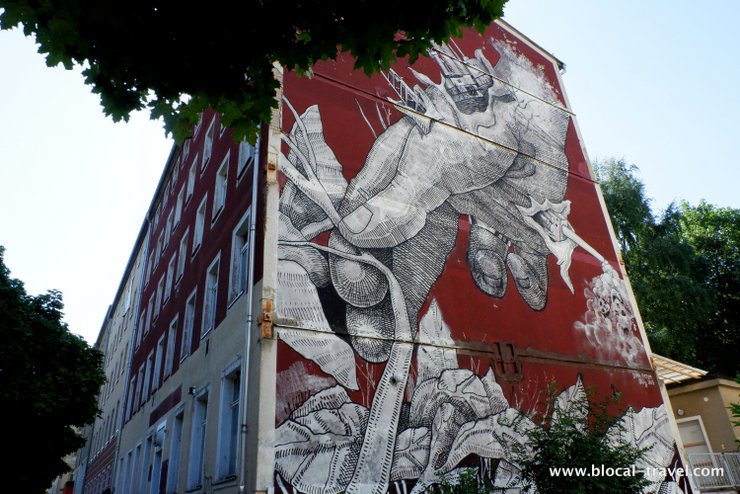 On the last night before the opening, the ‘vibe’ has turned into actual ‘electricity’: everybody has to finish their piece tonight, and make the space ready for visitors.

However, some artists are still meeting in the most forgotten corners of the factories to create new pieces together. Lamia (outta the Tape Over Crew) felt inspired by the tattoo that Kenneth Letsoin has on his neck, and so they have just begun creating something together: 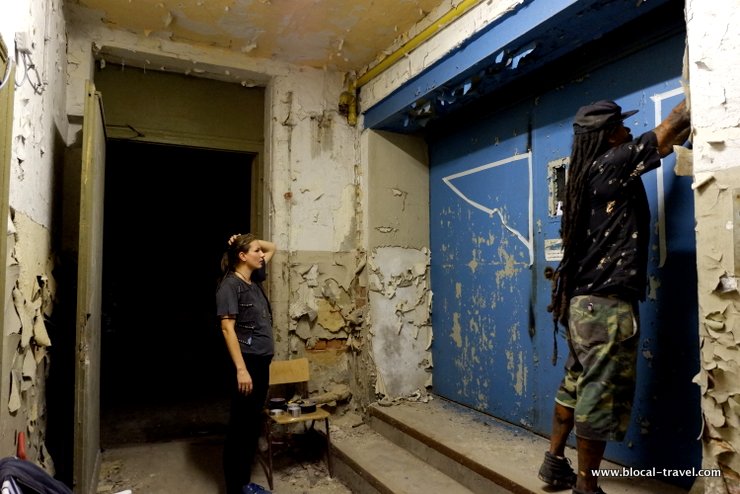 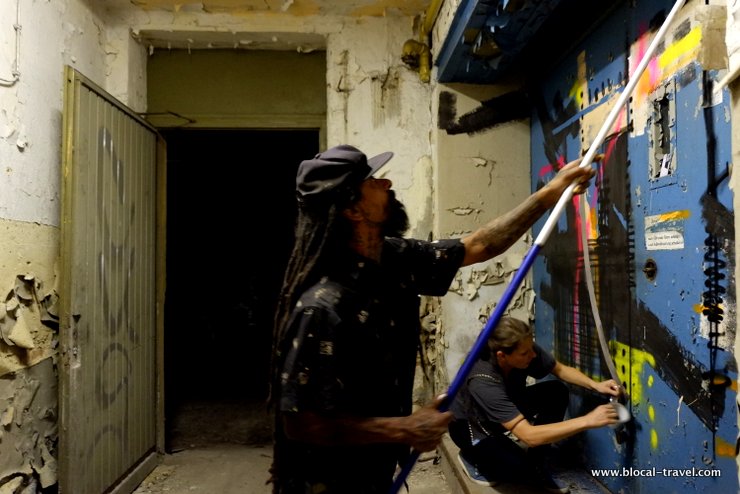 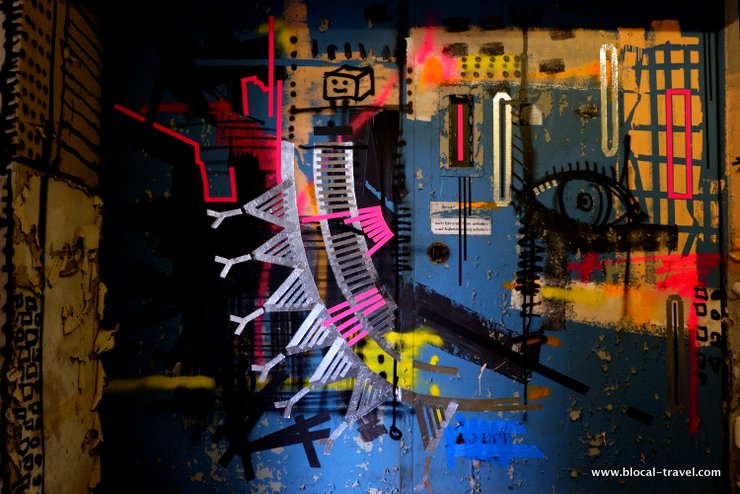 Even on the last night, nobody feels that they are ‘finished’: everybody keeps creating new pieces with different artists and in the most hidden corners in the factory.

I’m writing in the middle of a room full of corn plants, which eventually will end up hung to the ceiling (right now, only four of them are up). 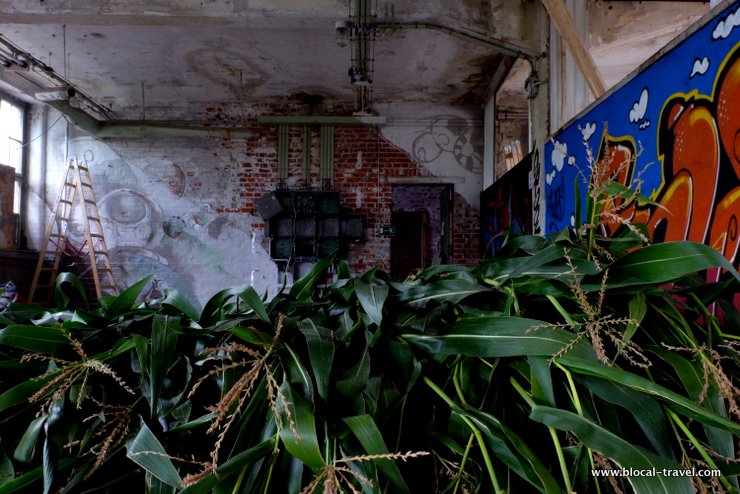 I can hear many sounds coming from different areas of the factory: hammering, drilling, the shrill metal clacking of the spray-can, and one swear or two.

However, everybody is still laid-back, chilling on the IBUG vibe.

Nobody looks visibly stressed, but –well- the night is young…

Every day I upload new photos to my IBUG 2017 album on Facebook: check it out!