The alleyways of Trastevere are the veins of Rome. Here, there is always a tavern or craft shop to visit, there are always card games played on street corners, and the exuberant style and culture of the district (now considered the “Historic Centre”) is manifested in its street art.

The street art in Trastevere is much more spontaneous than the rest of the street art throughout Rome, because the historic buildings of the district are considered “cultural heritage” and are therefore protected by architectural constraints that make it very difficult to obtain the necessary authorizations to intervene with large murals.

As is often the case, this limit has been interpreted as an opportunity by the street artists of Rome who have made Trastevere the centre of the capital’s poster art. Posters have always been among the favourite mediums of many street artists because they allow you to create an image in the tranquillity of your studio and, subsequently, install it on the street quickly and without attracting too much attention. The reproducibility of the poster allows the artist to easily affirm his own visual identity, while in the ephemeral character of the chosen medium one can also read a form of respect for the history of the walls of Trastevere. 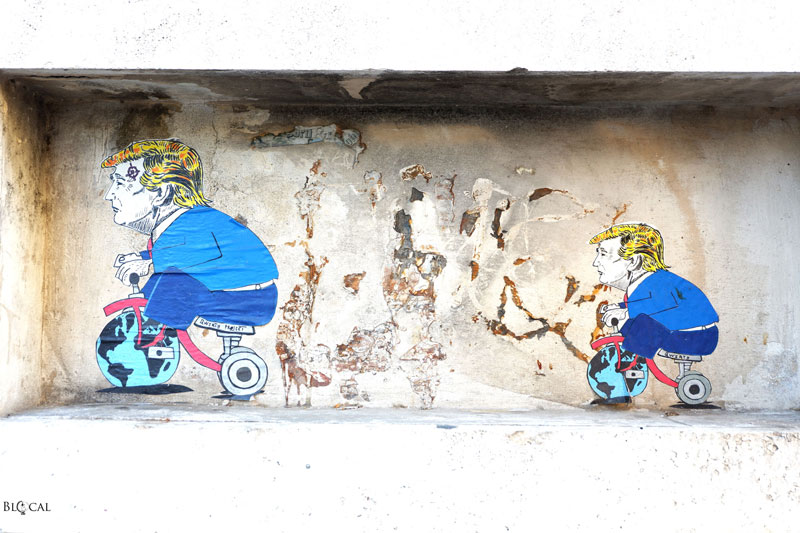 Walking through the alleys of Trastevere we find posters of very active artists in Rome, such as Kappa2Emme, Merioone “Fishes Invasion”, Qwerty, Ablup, Eiknarf, Guaro, Mimì le Cown, Elia900 and Harry Greb. We also see many posters of artists passing through the capital who did not miss the opportunity to contribute their works to the Trastevere poster art collection, which has since become world famous. 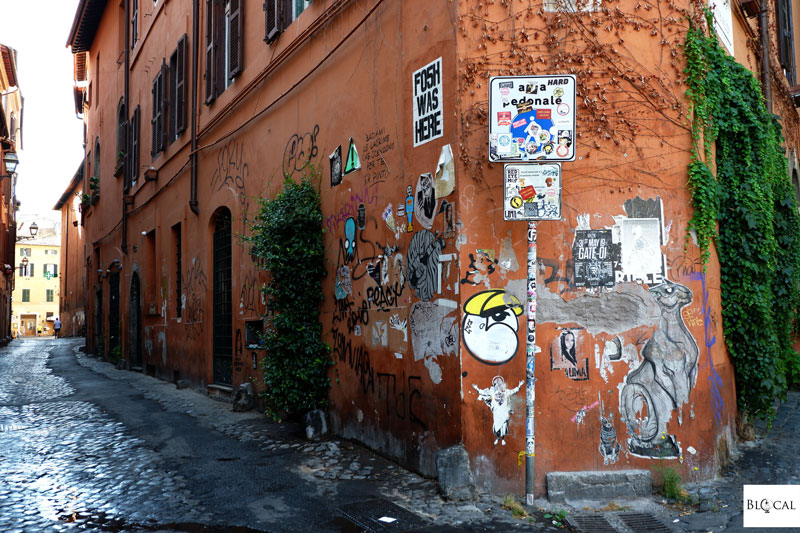 In Trastevere, there are five walls of poster art whose visual impact is nothing less than that of the most famous murals of Rome. The best known of which is in Via della Lungaretta, sharing a corner with Piazza Santa Maria in Trastevere. Here, Italian and international street artists have been “cultivating” a wall for years that, much like a vegetable garden, changes according to the seasons in an organic and spontaneous way. The same goes for the bulwark in Via della Paglia on the other side of the square, for the wall in front of the historic neighbourhood bar “San Callisto”, a famous meeting point for the Trasteverina nightlife, and for the corner at the beginning of Via Garibaldi, where you enter the district by passing under Porta Settimiana. The Trastevere poster art installation, in which the largest number of artists participated, is at the entrance of Cinema America. Squatted in 2012 after 14 years of neglect, the cinema has become the symbol of a Trastevere renaissance based on art and culture, rather than on building speculation. Unfortunately, the cinema was evicted in 2014 and since then, numerous street artists have left commemorative work on its doors, forever closed to the public. Despite the architectural constraints imposed on the historic buildings of the district, it is still possible to admire some murals in Trastevere. First of all, “I still remember how it was before” painted by the English artist My Dog Sighs on the wall of the Nuovo Regina Margherita hospital. The work was created in 2018 as part of the Forgotten Project, an initiative aimed at enhancing the contemporary architectural heritage of Rome through urban art. The mural of My Dog Sighs in Trastevere is made up of 540 eyes, each of which contains the reflection of the Roman skyline and the silhouette of characters born, dead, or who have worked inside the hospital. Read about my week with My Dog Sighs in Rome

Another wonderful work of street art in Trastevere is the staircase in Via Ugo Bassi, a street that takes its name from the Garibaldian priest from the film “In the Name of the Sovereign People,” directed by Luigi Magni. And it was from this film that the Roman artist Diavù was inspired when, in 2015, he portrayed the face of the actress Elena Sofia Ricci on this majestic staircase, also immortalized by Luigi Magni in his 1990 film. Photo by the artist

Among the authorized street art works in Trastevere we find the beautiful shutter of Palazzo Velli Expo in Piazza Sant’Egidio, painted by the Turin street artist Neve at his solo exhibition at Velli in 2016. Complete with the hyper-realist style that distinguishes this piece, the artist painted Anna Perenna, the ancient Roman goddess of which Ovid wrote. The artist saw in this wise old woman a face covered with wrinkles and eyes full of vitality; the perfect metaphor of the Trastevere district. Although currently on the verge of disappearing, we cannot fail to mention the South African artist William Kentridge who, in 2016, created “Triumphs and Laments” by using a particular technique called “selective hydro-cleaning.” Also known as “reverse graffiti”, this technique consists of removing smog, moss, lichen, and cyanobacteria only in the specific spaces delimited by the stencils made by the artist. As a result, the artwork comes “alive”, and with the passage of time, nature and the smog from one of the busiest streets in Rome will restore the wall to its original appearance. It was, however, the ephemeral nature of this work that made it possible to circumvent the constraints imposed on walls of high architectural value, such as the walls of the Tiber. The murals by Kentridge on the Tiber consist of more than 80 figures including sacred and profane subjects, inspired by the history of Rome and derived from the classic iconography of ancient, medieval, modern, and contemporary Roman history. Rome’s rich history in art also inspired C215, the famous French stencil artist and great lover of our city who, during his numerous trips to Rome, created stencils inspired by religious art and Caravaggio in the various Roman neighbourhoods. On a mailbox located in Piazza Trilussa, it is still possible to admire one of his stencils inspired by the works of Caravaggio; more precisely, the face of the boy at the centre of the composition of the famous painting “Vocation of St. Matteo,” which is located in the Roman church of San Luigi dei Francesi. This article first appeared, in Italian, on You Local Rome

Find these and more local tips in my Rome Google map