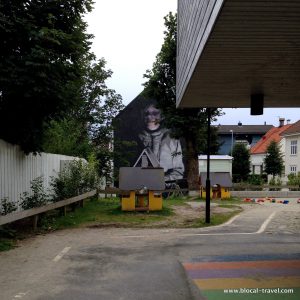 A bit disappointed, I grabbed a beer and sat down next to Axel, my cheeks still blanched from the cold and my coat completely wet. One of the organisers of the festival came over to me and subtly suggested that “it was a very good time to get some interviews done”.

“I’d like to interview Axel”, I replied, “but rumour has it that he never does interviews”. “I can do it”, he interjected lethargically from the other side of the couch, which I guessed was proven evidence that the promised ‘magic night’ was actually quite flat.

For first, I asked him about the piece he had just wrapped up in Stavanger (on 67 Nymansveien st.), discovering that Axel likes that mural not only for being site-specific, but also because it is designed for a particular audience: the kids at the kindergarten on whose wall he painted it.

Even the word written on it (‘klosser’, which means ‘toy building blocks’, like the ones held by the child portrayed) was chosen by the kids, and he likes the fact that he created something especially for those who will see it everyday, not just for the ‘street art world’.

This piece is a reflection on the meaning of playing at different ages of our lives, on how we progress from building houses with toy blocks to living inside actual houses we have built. 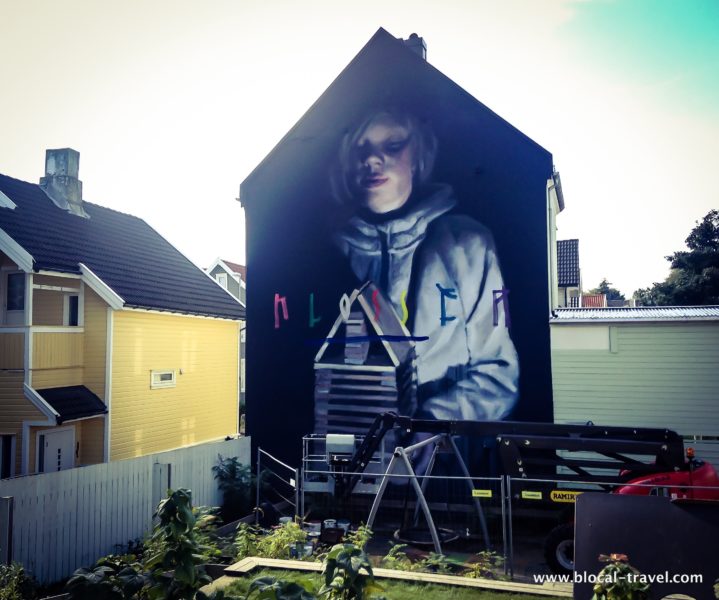 While my mind was wandering between Nietzsche’s “play is the highest form of human activity” and Aristotle’s “leisure is a serious business” searching for the next question, someone broke the solemness of our interview by entering the room and taking his shirt off.

“I’m sorry to interrupt”, he said, finally noticing us while picking a Nuart t-shirt from the overflowing box next to my chair. He tried it on and then stared at his body in puzzlement, eventually declaring that “the small is too small”. He rummaged through the big box looking for a medium size first and for a large size after that, trying them on and taking them off right away. Then he started the whole process again, apparently unaware that he had already tried a small size, but –at that point- we already knew the ending, so we went back to talking about Axel’s experience at the kindergarten where, besides painting the mural, he had also shot a short movie. 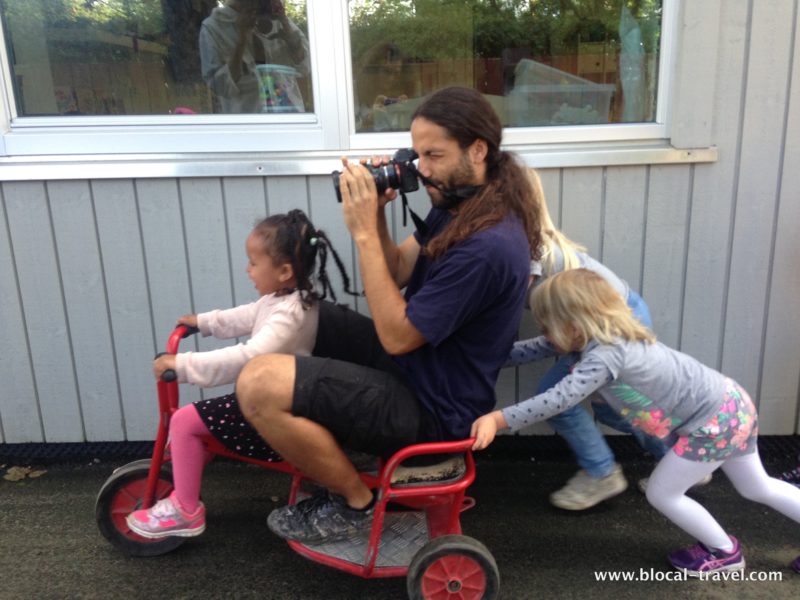 They all were in love with Axel

Axel began producing films four years ago out of a great passion for cinema. He does it in parallel with painting, sculpture and playing music (he is a saxophonist), and he considers each form of art complementary. But, even if they are all different ways of expressing the same things, filming is the ‘new toy’ he gets especially excited about. He is eagerly exploring this new powerful medium, and lately he has been producing many films to go with his mural production (you can watch them here).

The short movie he shot at the kindergarten in Stavanger is still about the concept of playing, which is compared to the act of working, by pointing out both positive and negative aspects of it.

While Axel was explaining to me the whole point of this movie’s open ending, someone else crashed our interview:

“Goodmorning”, he greeted, despite the fact that it was 2 am.

He stepped over the above-mentioned overflowing box and all the festival’s T-shirts in various sizes that, at that point, were scattered around the floor, taking a seat right in front of Axel and looking at me curiously. Our previous guest addressed at him solemnly: “Just don’t make too much noise, they are recording an interview.”

And on those words, they both turned towards us in silence, like spectators in a cinema. 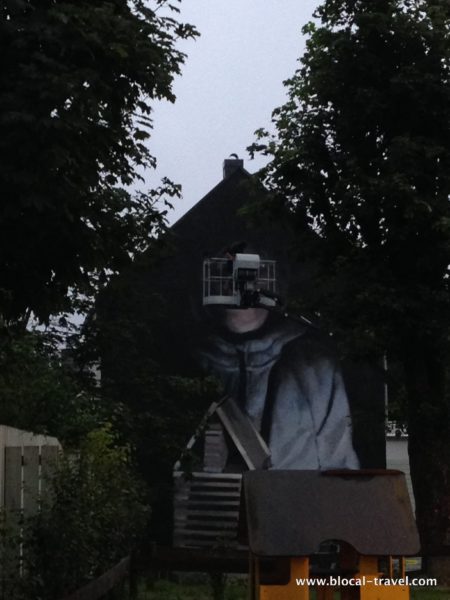 We carried on talking about the act of playing, which –according to Axel- is an activity like going to the gym, or even working. He considers himself a playful person, not only in a ‘Peter Pan’ kind of way, but also for how he approaches his work. Moreover, speaking of a more traditional meaning of “playing”, he said that he loves to play chess (and he claims to be quite good at it).

The Norwegian street artist Nipper peeked out from behind the door, and I tried to hook him on the topic of playing, as earlier that day he’d had a hands-on workshop with kids, but he was too tired, so he declined the invitation to join what –at that point- had become a group interview. 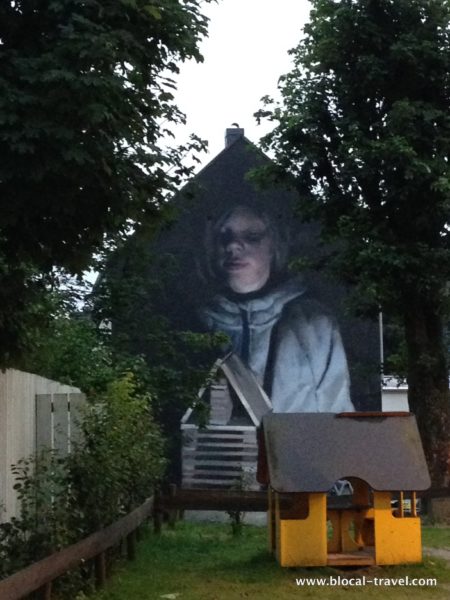 I asked Axel about the ‘Post Street Art’ exhibition, in which he wasn’t taking part. He wasn’t the only Nuart artist not present at the final show at Tou Scene (MTO and Hyuro hadn’t made any indoor pieces either), but somehow his absence was the most evident -or maybe that was just my perception as he was the one I was really looking forward to seeing in action at Nuart 2016.

Axel told me that he initially wanted to take part in the exhibition with a crashed van, which would have highlighted the idea that driving and crashing into each other is a means of human communication, and a big part of our lives to boot. But he couldn’t find a van which would fit in the space and, as he was already very busy with the wall and the filming, he eventually let it go since he didn’t want to do something half-baked.

Axel’s assistant walked past the big window at my right side and looked inside our crowded little room hoping to catch Axel’s attention and drag him to their video editing job, but Axel was talking so enthusiastically about his crashed van idea that he didn’t notice him.

What I liked about his crashed van project is that through it, once again, Axel would have make beauty stand out from the darkness. I told him this is something I really like in his art, and he pointed out that he had also done many sweet and tender pieces, but people only remember him for his darkest works. As he said it, I recalled that his mural in Rome doesn’t have a hint of black, even if I won’t define it as ‘optimistic’ either. Anyway, he eventually admitted that his dark side is pretty prominent, even in filming where he avoids saturated colours and wants everything to be subtle. 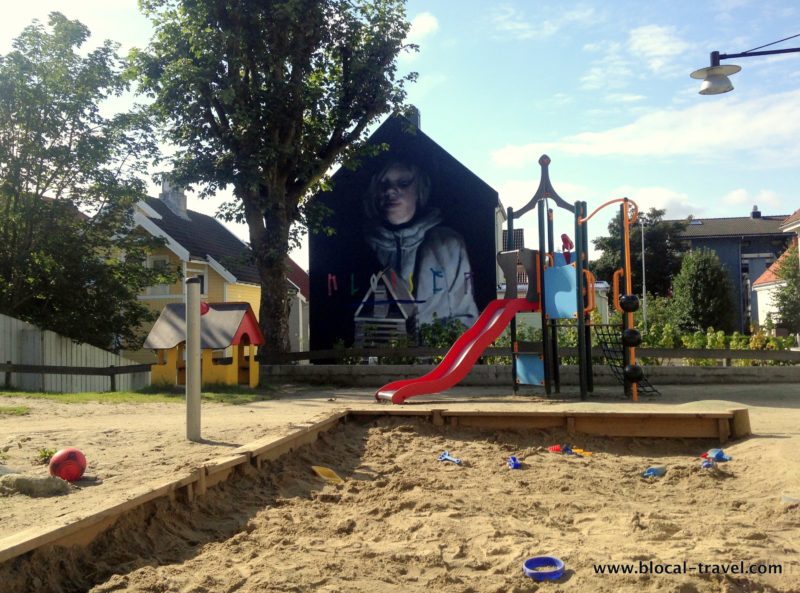 His assistant walked past our room once more, this time slower, and thus managed to catch Axel’s attention; despite it being almost 3 am, he was really keen to get some work done. I had to set the guy free, but not before one last question about his future projects.

Axel is considering doing some ‘crazy stuff’ in public spaces (and yes, this is actually the technical term he used to define his next move); something that reminds him of teenagers’ playing, because this is what art has always been for him: a serious thing and just as serious as he thinks playing should be.

We walked back to the hotel in a damp, chilly, no-one-but-us-is-out night.

Thank you Alejandro for your time, I hope to meet you again!

Morcky and the Beginning of Figurative Graffiti in...