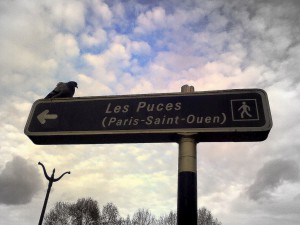 I don’t remember when I was in Paris for the first time; what I remember is that back then (and for many years later on) at the top of my “to-do-in-Paris” list there was a merry-go-round near the Tour Eiffel (and each time we go in Paris my parents can’t help but telling me again the story of when we almost lost an airplane after spending the whole day on it).
Nowadays, at the very top of my “to-do-in-Paris” list there is a visit at Les Puces, the flea market of Paris–Saint-Ouen. I perfectly remember the epiphany moment when I heard about it for the first time, the moment when an extremely boring French class at school suddenly started making sense and I was pleasantly surprised that finally I was actually learning something useful! And the next time we went to visit our relatives in Paris there I was, lost in the endless heaven of vintage clothes and original design pieces, at the very heart of the multicultural Paris. And there I keep coming back each time I go to Paris (now I can say that almost the 20% of my clothes come from there, the latest ones being a  punk studded jacket, a very colourful African dress and a pair of comfortable black trousers which almost everybody would wear as a pyjama but I will dare to go out in public with them!). But I don’t only stick to my “to-do-in-Paris” list, I also love to discover new places each time! This time I discovered the Musée en Herbe, a very small yet very precious museum situated near Place des Victories (in a very elegant and very lovely area) where it was taking place an exhibition of Keith Haring works from the underground period. 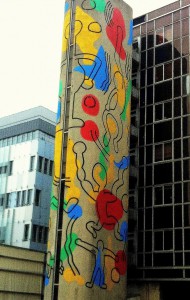 Still on Haring’s trail, I went seeing his mural on the exterior of Necker Childen’s Hospital, a masterpiece that is there since 1987 but which –hard to believe- I still didn’t have seen and that I discovered thanks to my friend Silvia who did her Erasmus exchange at that hospital. Back to my “to-do-in-Paris” list, just after the shopping at Les Puces it’s noted to stuff myself with fabulous French food, especially fois gras and French cheeses which are my favourite! With the aggravating circumstance of being Christmas holidays, I accomplished also this task on my list eating soufflés, terrines, fois gras, goose with apple, mashed celeries (delicious!), capon stuffed with fois gras, roasted roe on blueberry sauce and chestnut cream, Christmas bȗches, Lorraine salad (which I discovered being something you definitely mustn’t order when you wanna have a light meal and decide to go for a salad just to eat a little something…) and a very wide range of French cheeses. To digest all that, on Christmas afternoon we went for a long walk among peacocks, kangaroos, flamingos and bambis (ehm, “fawns”…) at the Chateau de Sauvage, a zoological reserve near Rambouillet, where we spent a pleasant naturalistic afternoon which later was perfectly counterbalanced by a mundane evening at the Casinò de Paris. Against a background of video projections, Rasta Thomas and the sexy, athletic and funny dancers of the company “Bad Boys of Dance” (founded in 2007) performed in “Rock the Ballet”, a modern show free from ballet’s usual strictness and technicality, bringing on stage the 21st century pop ballet or rather –quoting “Entertainment Tonight”- <<what would you get if you took the best of Baryshnikov, Bruce Lee and Michael Jackson>>.
Keith Haring