Home Art Days of future past: Adrian Tranquilli’s works at the Archaeological Museum of Naples
ArtNaples

Days of future past: Adrian Tranquilli’s works at the Archaeological Museum of Naples 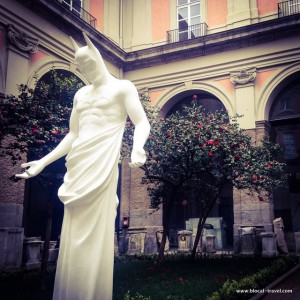 In the wide entrance of the Archaeological Museum, laughter from classes on a school trip echo and tourist groups gather.

I duck out from all the shouting and enter the first wing on the right, where I find the Collezione Farnese, originally located in the Palazzo Farnese in Rome, this collection of ancient sculptures put together first by Pope Paolo III and later by his descendants.

Here, lined up along the wide walls, is a rich heritage of ancient marbles collected in decades of diggings (Baths of Caracalla, Roman Forum, Palatino), purchases, seizures and inheritances. These statues are many and majestic, their bodies well defined and so fleshy that they seem real. They rest peacefully one after another, dominating the quiet of the big room. 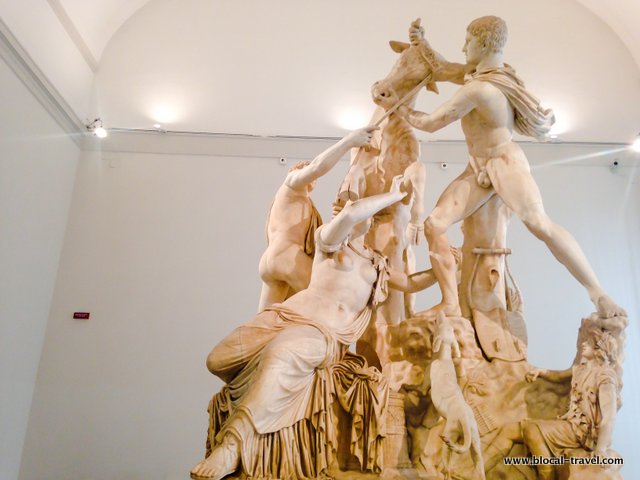 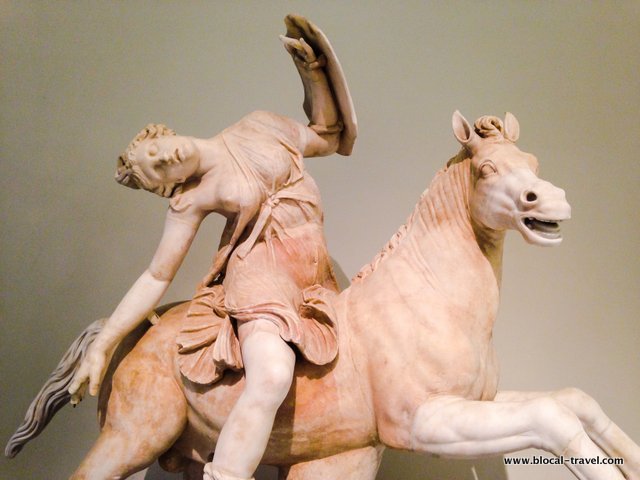 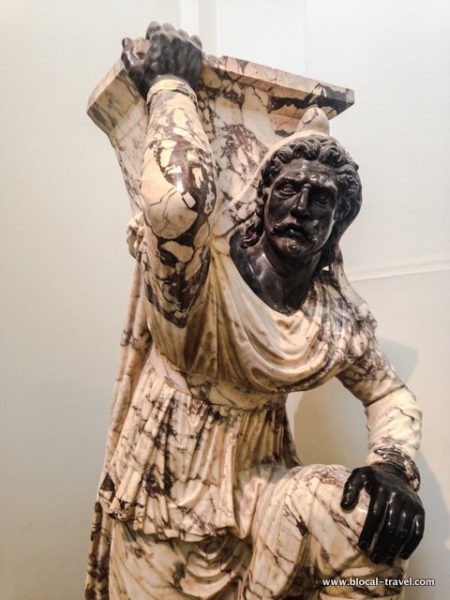 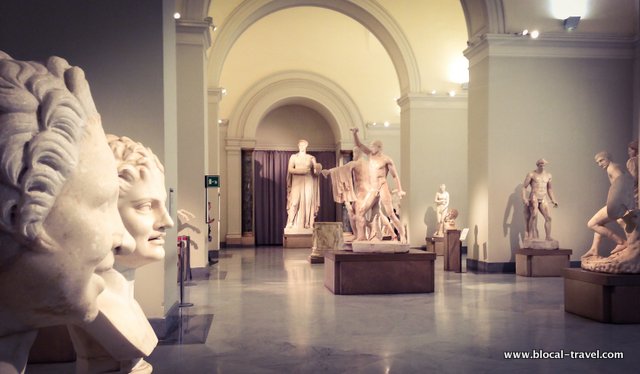 I carry on the visit through the second wing of the collection, a long hallway through which I can hear my own steps resonating on the precious marble floor. Here, there are more sculptures this time from Villa Farnesina, whose white colour is emphasized by the white light of this early spring morning, which is softening every contrast.

But while I’m on this muffled path, suddenly something catches my gaze: a contrast, indeed. A bright blue something breaks the monochrome of marbles, a flooring counterpoint of classic antiquity and futurology, archaeology and science fiction. 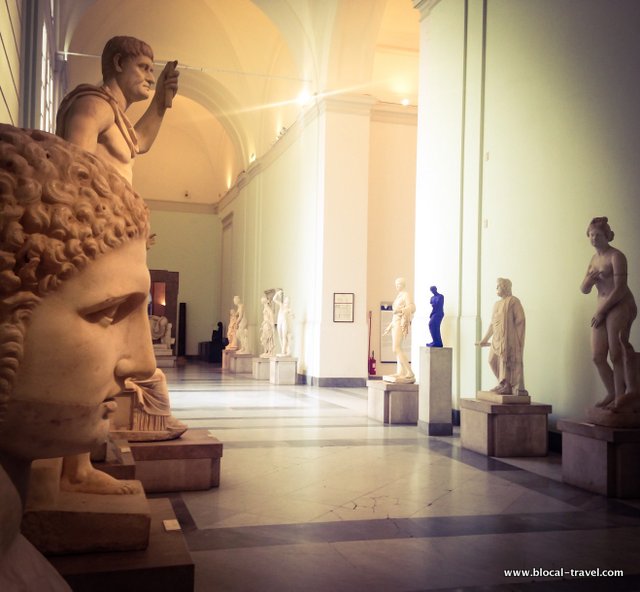 Discretely set between two classical statues there is “Alien – The Artist”, a science fiction sculpture by Adrian Tranquilli composing “Days of future past”, the current temporary exhibition, which is based on comics and superheroes. 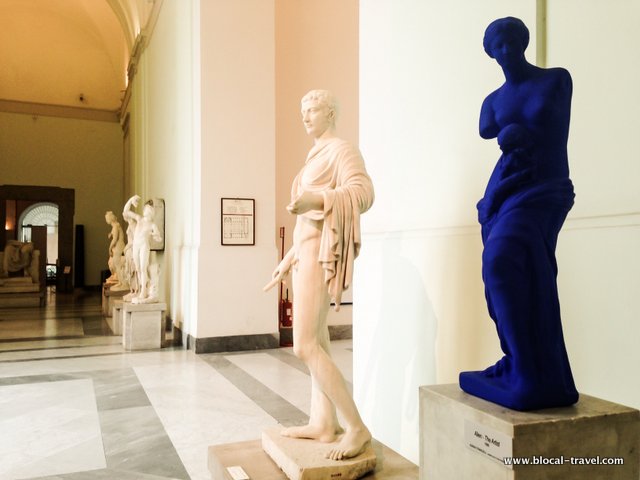 It carries on in the following room, where I find statues of Batman and Spiderman, two protagonists of the dialogue between superheroes and classic statues, which are heroic par excellence. 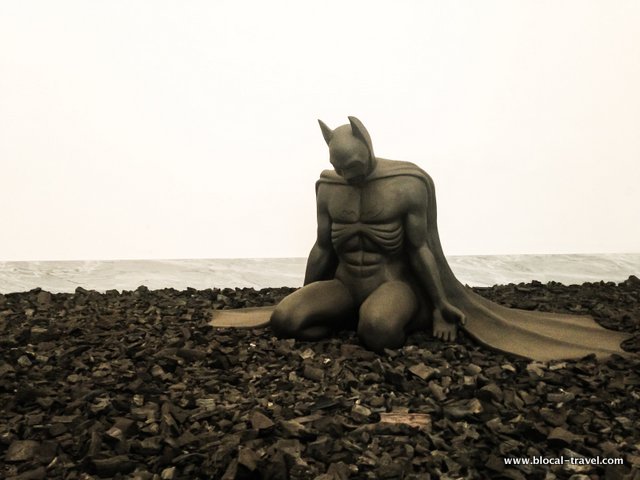 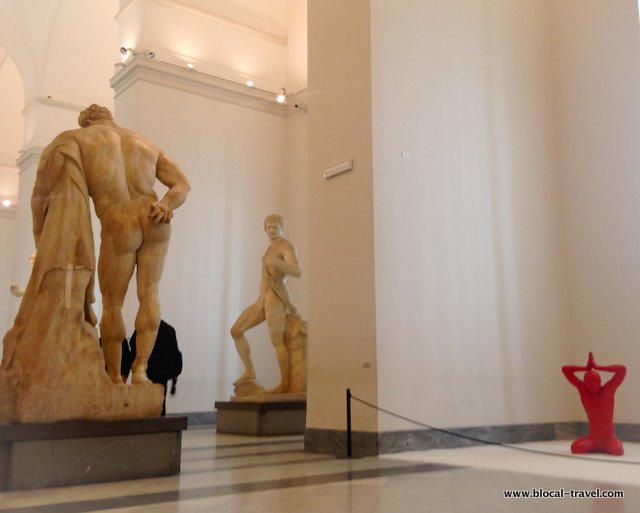 Then I visited the Gallery of Emperors where, lingering among portraits of the protagonists of ancient Rome, there are three more works by Adrian Tranquilli continuing the discussion between an iconographic language from the past and one from the contemporary culture of mass-media (both cinema and comics in this case), representing –at the same time- those relics from our times that a hypothetical archaeologist from the future would find. 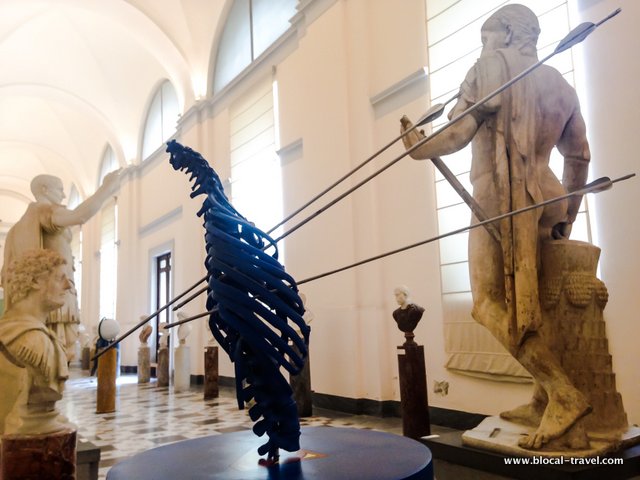 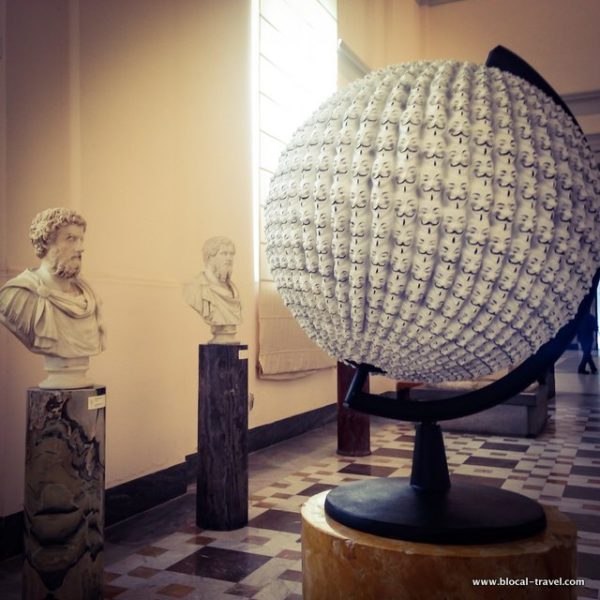 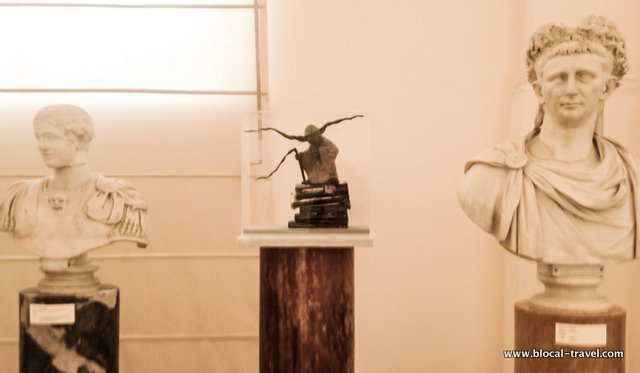 After visiting the first wing, I enjoy a breath of fresh air at the Fountains Garden, where spring has made the first flowers bloom. In the middle of this garden there is a majestic fountain in red porphyry, while on the narrow alleys there are some small marble statues. 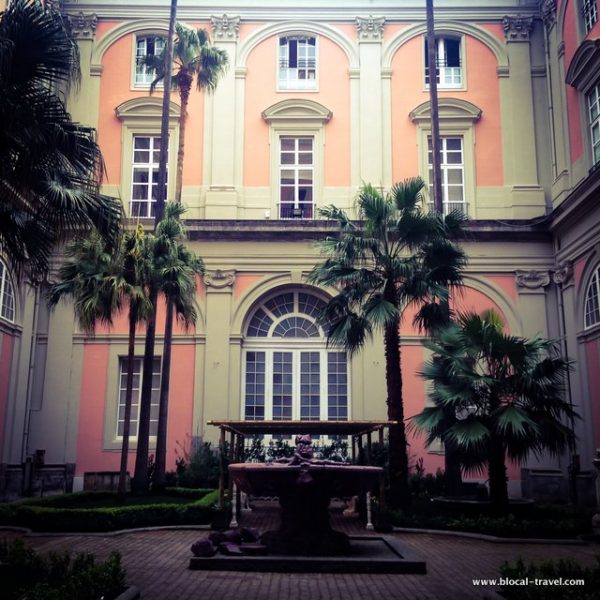 In the other courtyard, they are counterpointed by three big statues of Batman, the modern hero at the core of Adrian Tranquilli’s work investigating the parallelism between comics and religion, both of which focus on their different realities.

I go up the majestic marble stairs and on the first floor I find the Mosaics Collection, which comprises pieces of flooring from Pompeii, Herculaneum and Stabiae. This is one of the richest collections of mosaics worldwide and it includes several emblemata: beautiful designs made of stones, which were cut and removed from the original sites as they were considered the most precious part of the flooring. 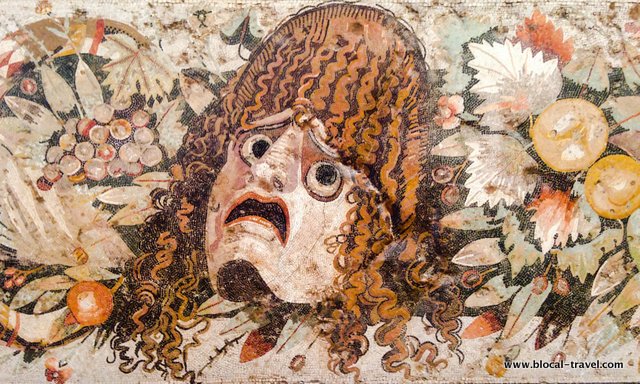 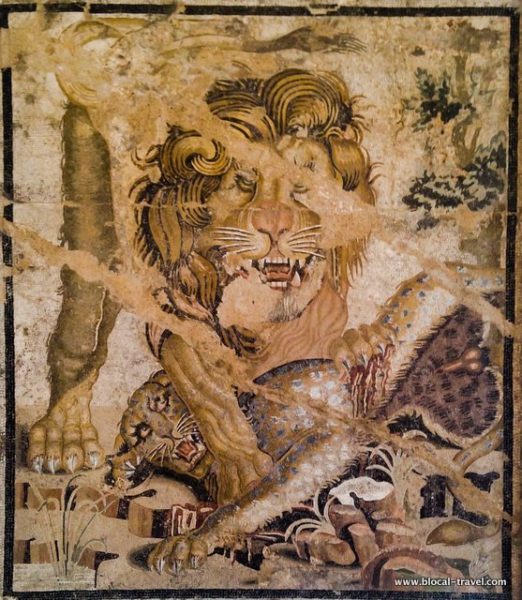 Still on the upper floor there are collections of everyday objects in bronze, glass, silver and ivory that were found in Pompeii and Herculaneum. 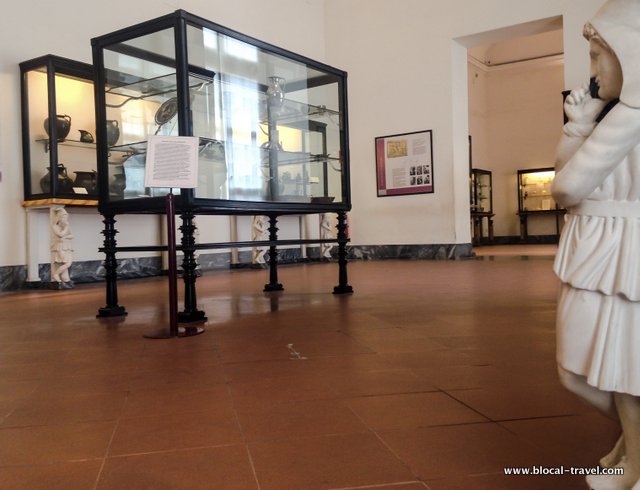 While I wander around and look inside these display cases, other visitors’ exclamations of surprise proclaim yet more artworks by Adrian Tranquilli. 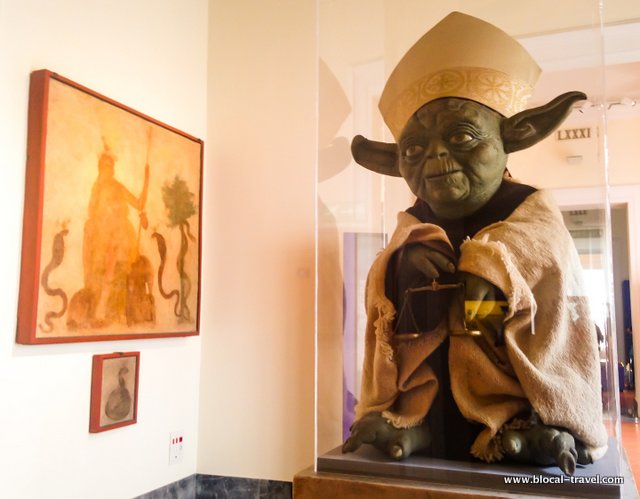 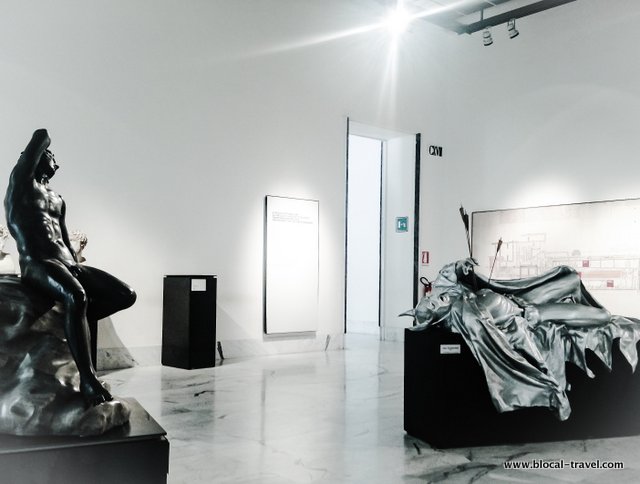 Here in this wing there are not only statues, but also paintings: four representations of Batman from the “In Excelsis” series, where the superhero is represented as a God and a saviour, and which counterpoint the mythological-themed paintings from Pompeii. 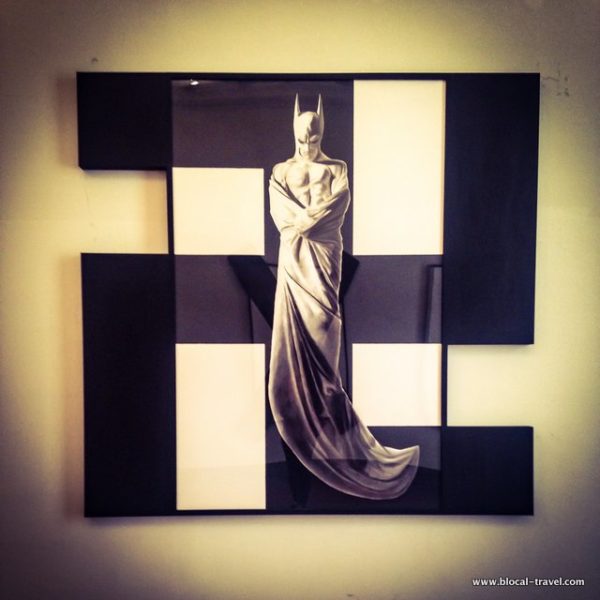 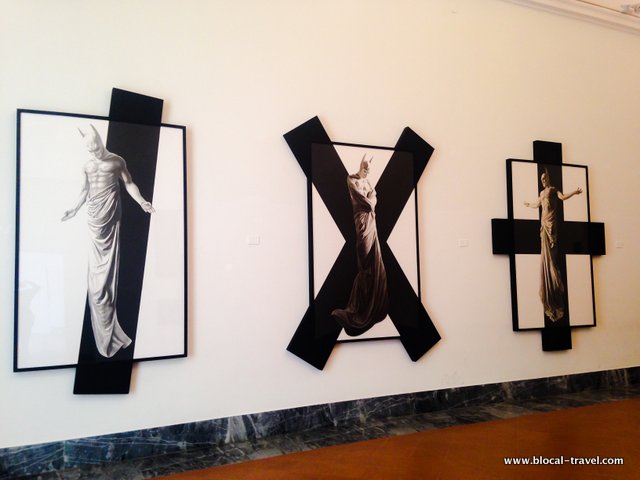 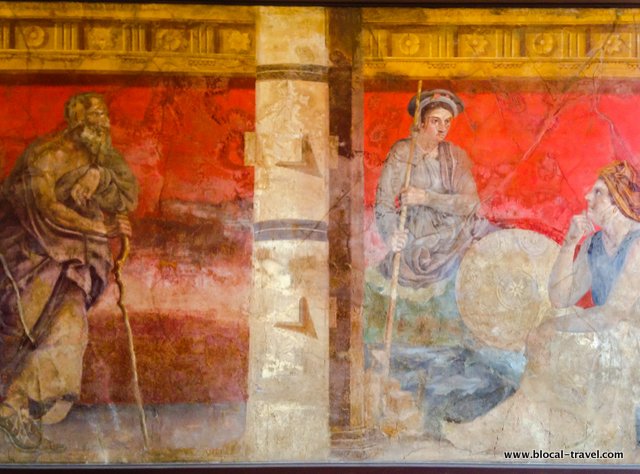 Finally, I visit the amazingly frescoed Meridiana Hall where another superhero, this time from the past, is awaiting me: Atlas, the pillar of the sky, who carries the weight of the globe on his shoulders like a science fiction superhero carrying all the problems of the world on his back. 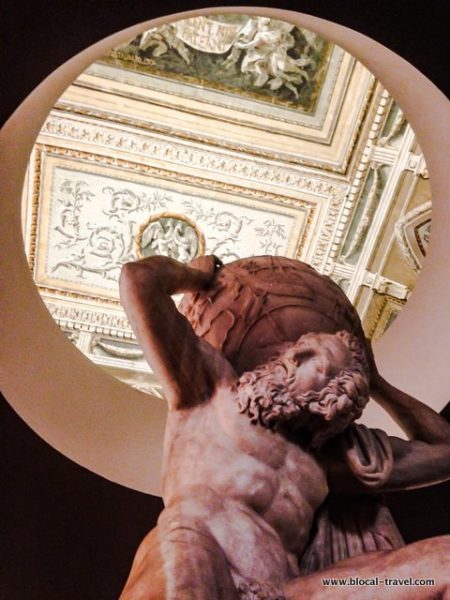 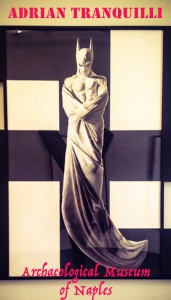 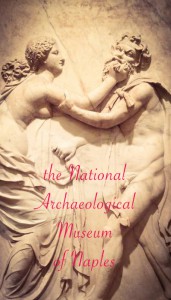