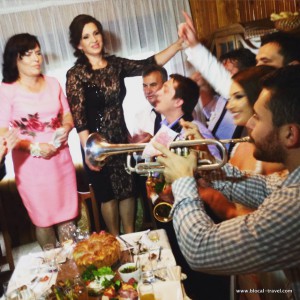 I met the other invitee from Italy at Rome airport. The reunion was joyful, as it always is when we meet again to bring back the crazy years spent living together in the Balkans. But this time we had one more reason to celebrate: our friend, with whom –during the years- we have shared some amazing Balkan experiences, was getting married. It meant that we were about to take part in our first Big Fat Balkan Wedding, which is the ultimate experience you can have in Balkan countries.

Our first night in Macedonia was pretty similar to the incipit of every previous reunion we had had in the Balkans: there was an eager catching up on our lives (despite the fact that we write to each other daily on whatsapp), a traditional restaurant, lots of laughs and even more jivelj, with beer, wine, rakija, or whatever we were drinking. 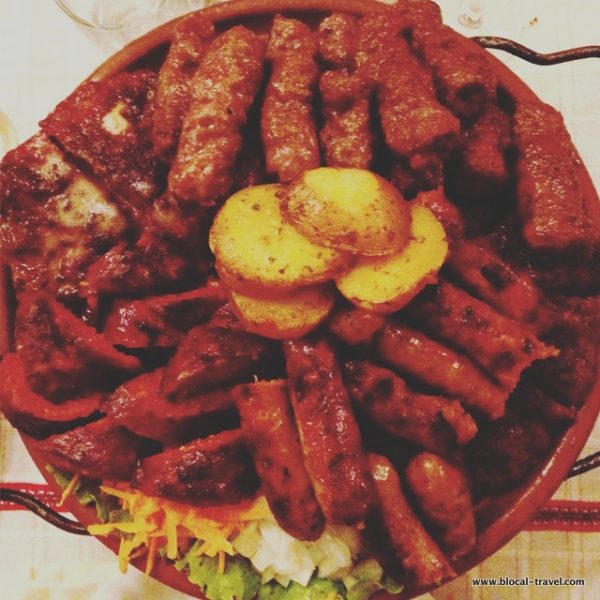 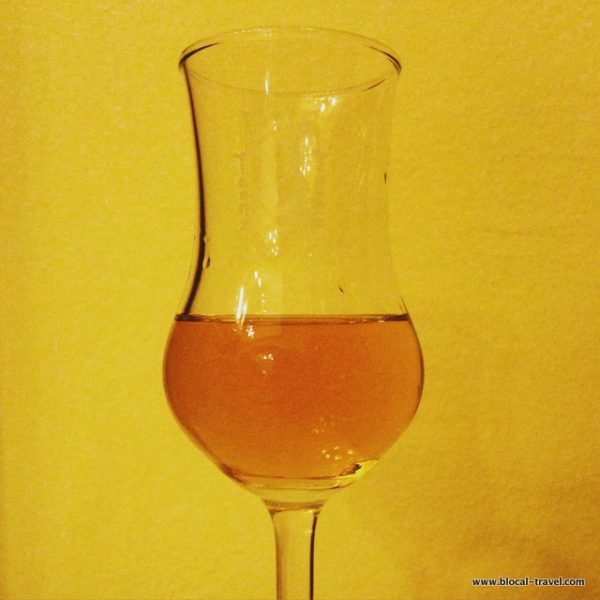 After the last cevapc had disappeared into our stomachs, our friend got serious for one moment;

‘Girls, have you learnt how to dance the kolo?’

‘You know, that dance from those videos I sent to you…’

We hadn’t, obviously. Not for lack of trying. Just, a collective dance named after a circle formed by numerous dancers is easier to learn with -you know- other dancers, which we finally happened to have by our sides at the very last possible moment: the night before the wedding.

When we arrived at the bride’s place, the atmosphere was already pretty festive. As soon as several bottles of the national beer -as well as the homemade rakija– smoothered everybody’s English and my Jugoslavensko, we got to know what roles we had been assigned to for the morning: we were chosen to play the big brothers, who must refuse the groom’s money at least three times and literally stand in his way to make it impossible for him to see the bride.

The action was a cacophonous mess of pushing, yelling, money grabbing and fists on doors and walls. Transliterated in Balkan terms: a huge success.

When the groom rejoined the bride, the brass band, which until that moment was playing in the garden, come upstairs to spread their vibes across my friend’s living room, while all the guests took their places at, around and on the tables.

After some more dancing and drinking in the garden, the crowd began to head towards the church. Leaning out of the back window of her metallic-silver convertible car, from whose roof a huge Macedonian flag was proudly flapping, the bride reached out to us:

“Don’t worry sweetheart, see you at the church!” 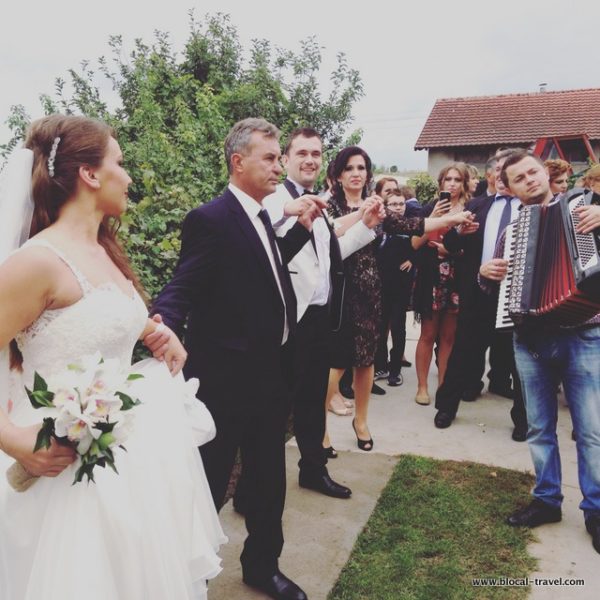 From the outside, Saint Nicholas’ Church is pretty modern, with huge windows enclosing the traditional Orthodox porch. Inside, gigantic crystal chandeliers and frescoed Byzantine icons contributed to set the solemn atmosphere of the ceremony, which was mostly chanted rather than sermonized. 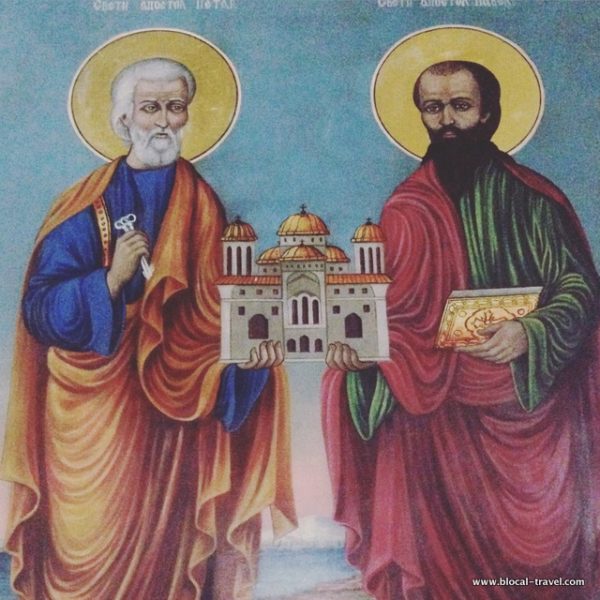 The bride and the groom exchanged rings and were crowned by the priest. 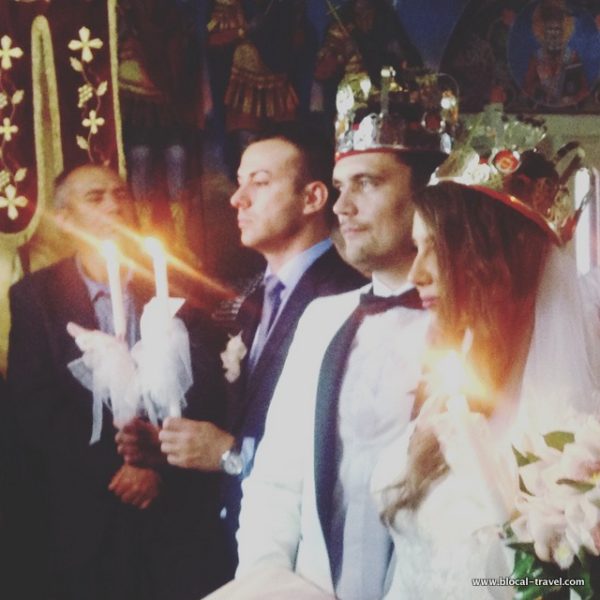 Wearing their fairy-tell-like crowns, and after more prayers, the couple shared a common cup of blessed wine and then, led by the priest, they begun a procession inside the church, followed by the bestmen and the bestwoman, who were holding candles.

As we were leaving the church, our guide-for-the-day informed us that there was going to be a two-hour break in order to rest a bit and refresh our make-up or, quoting him, ‘to add some extra make-up’, impling that our discreet look, which was considered already too soft for the day, would have looked definitely not Balkan for the second part of the wedding. 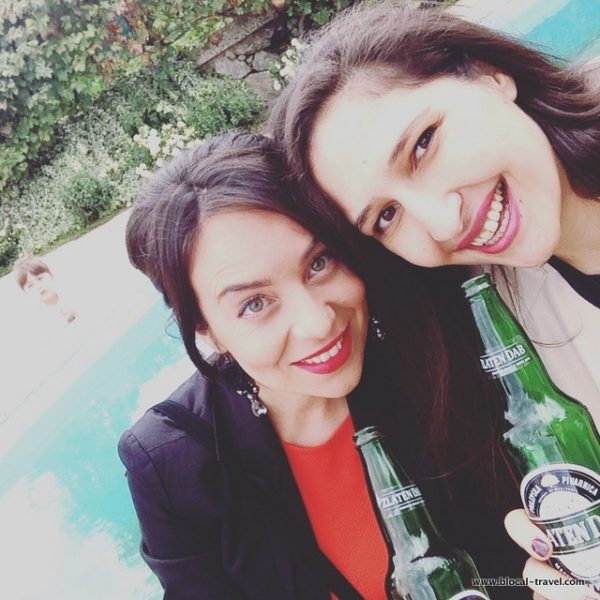 We woke up hearing our friend knocking compulsively at our door, desperately needing help to fix her dress and make-up before what turned out to be the longest photo session ever.

Still a bit dizzy, we went downstairs and entered the spacious hall of the wedding reception. As soon as we sat at our table, the waiter arrived with two glasses of whisky, as if to make it clear that yes, this was a big fat Balkan wedding. 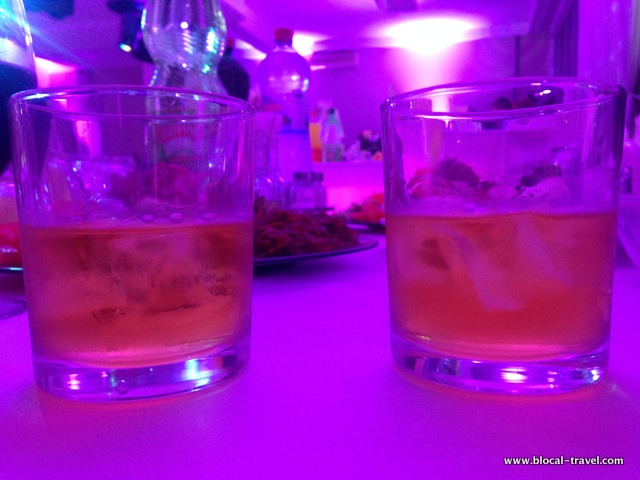 The newlyweds opened the dancing to the notes of ‘I will always love you’, then the music shifted radically eastwards from Whitney Houston to Goran Bregovic and the brass band began to play traditional Balkan songs.

Everybody stood up and grabbed their neighbour’s hand. The circle was made. The kolo was about to begin.

‘Will the dancing stop, eventually?’

‘Unlikely. People will come and go back to their tables to eat, but the kolo must go on’, our guide-for-the-day explained.

I looked at that long dancing snake led by my friend and her –oh my god- husband. I had a glass of rakija and walked closer to the action, I stood aside to study the steps, waiting for the dance to shift to the four-steps-forward-two-steps-backward that I had learnt the night before.

When my tablemates, who were more brazen than me, or just more drunk, danced past my comfort corner, they simply grabbed my hand and pulled me into the circle. That was it: I was mastering the kolo. Well, kind of… or better, I was staring at my feet and kept mouthing one-two-three-four-one-two-three-four. But when the music became fast paced and different syncopated steps were needed, I made a vague move and headed back to the table for one more drink. If I was going back into the kolo circle, I needed yet more alcohol first to smooth the action. 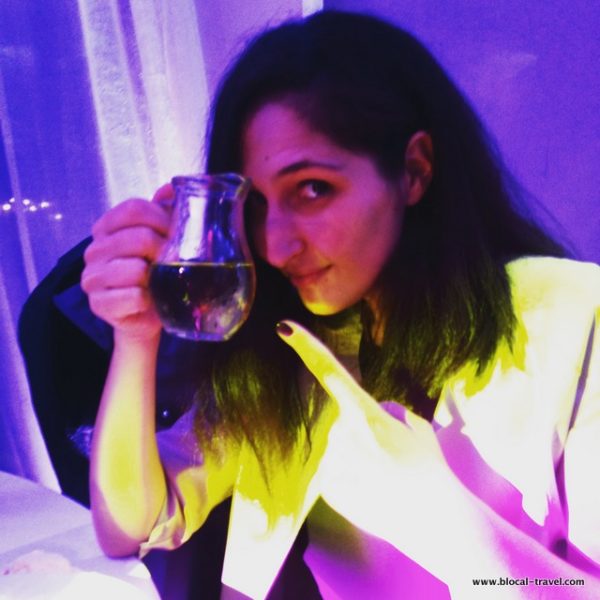 Me and my other best friend: Rakija

While some invetees begun to kiss goodbyes to the just-married couple, the bestman came up to us:

‘Girls, we are going to a club for some less-traditional dancing. Are you coming?’

I reached for the rakija and swallowed it down. Then I turned my head and glanced at my friend:

My favorite cemeteries in Rome

Nico, The Riot Vandals (TRV) and the Golden...

Things That People House Hunting in Amsterdam Will...