Street art in San Lorenzo: a trip along large murals and painted shutters

Graffiti is inextricably linked to trains and therefore it comes as no surprise that the walls of the neighbourhood situated between the two main train stations in Rome – Termini and Tiburtina – are filled with tags and throw-ups. 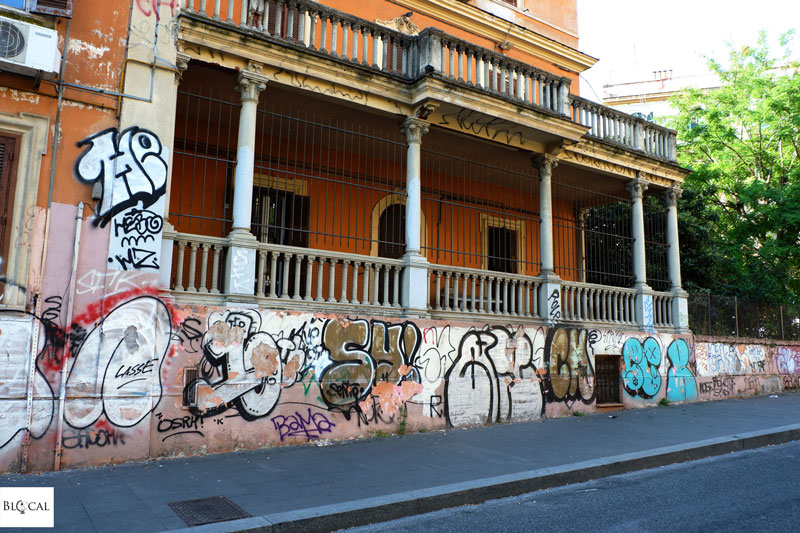 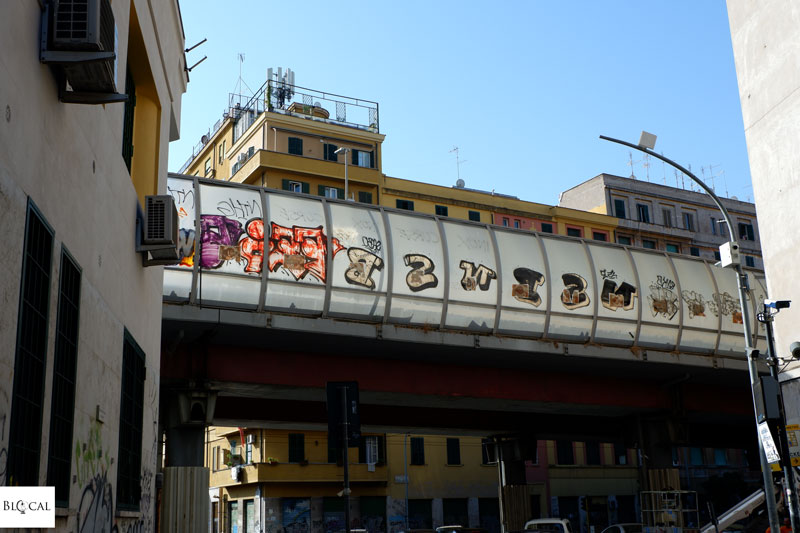 Graffiti and San Lorenzo go hand in hand: the aerosol art tells the story of a lively neighbourhood − home primarily to students coming from all over Italy and visited by those who are keen to enjoy the capital’s nightlife. 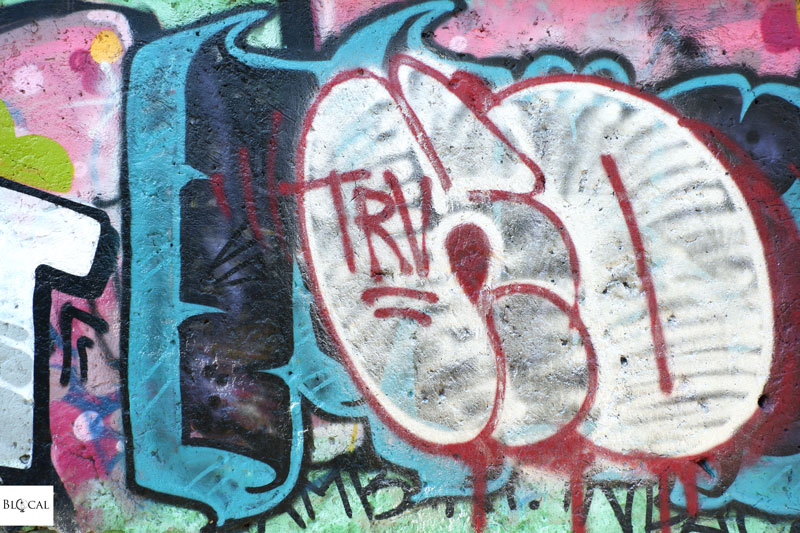 The dynamism in this working-class area was not lost on the trailblazers of Roman street art and it was here that they created their first illegal stencils and murals. 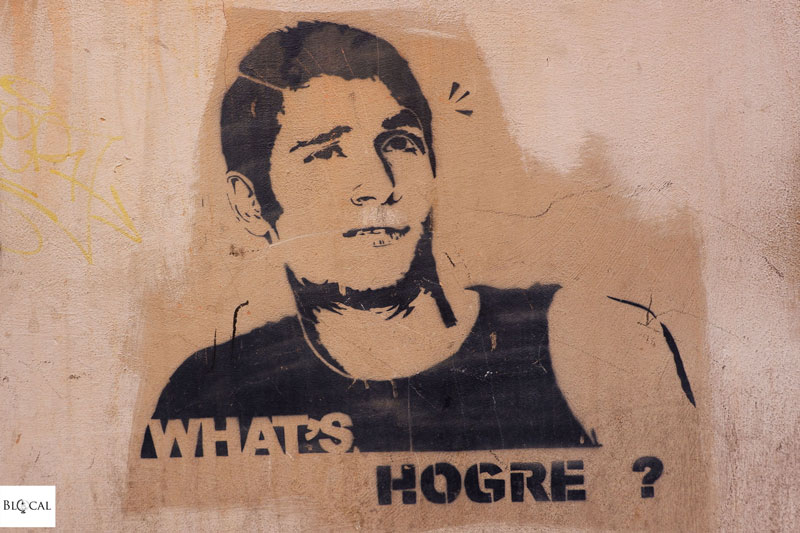 Street art in San Lorenza blossomed at a time when the phenomenon had not yet taken hold in many other parts of the city, and the traces of this pioneering period are still visible on its walls.

By the time the first legal murals started to be produced in Rome, San Lorenzo was once more at the vanguard. 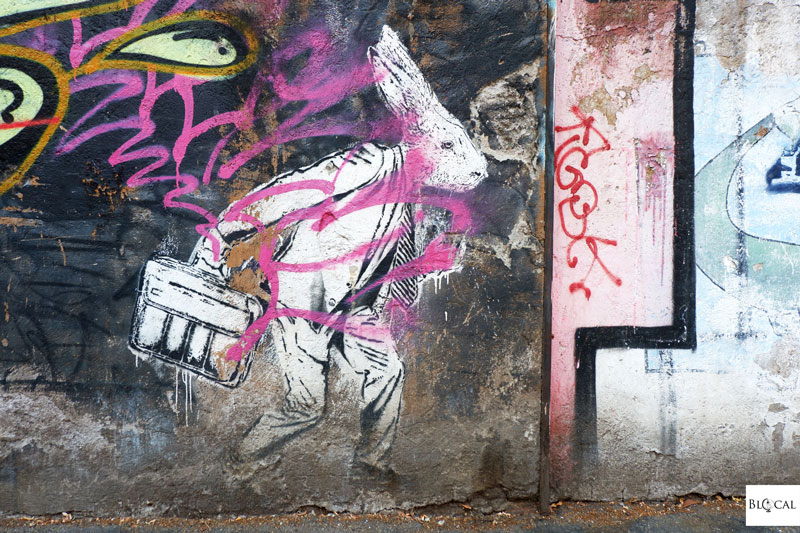 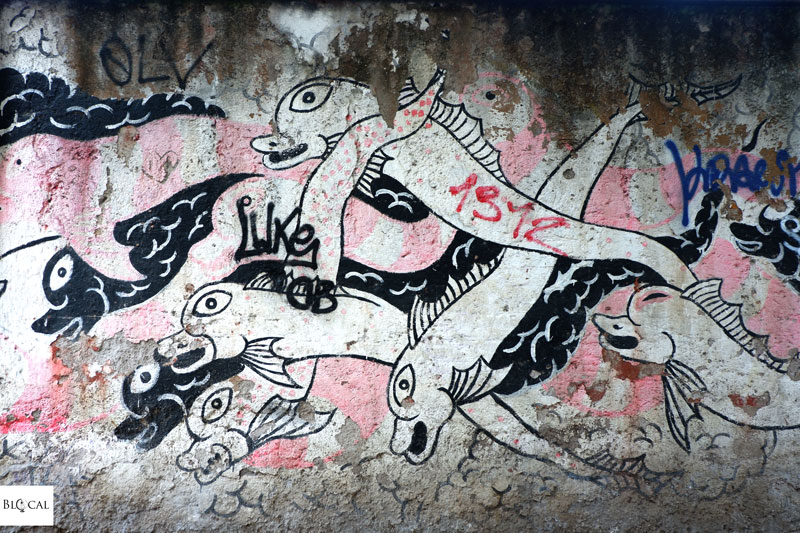 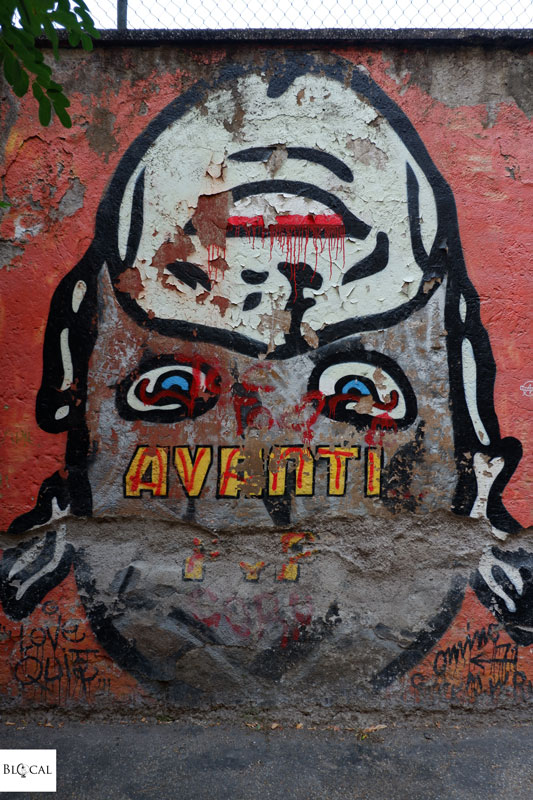 In Via degli Ausoni, the wall next to a sports ground still flaunts – albeit in faded colours – some of the works that were created in 2010 (in the world of street art that’s practically prehistory!) by artists such as Hogre, Omino71, Agostino Iacurci, Honi, Hitnes, Lucamaleonte, Uno, Hopnn and many others on the ocassion of the event ‘Collective’. 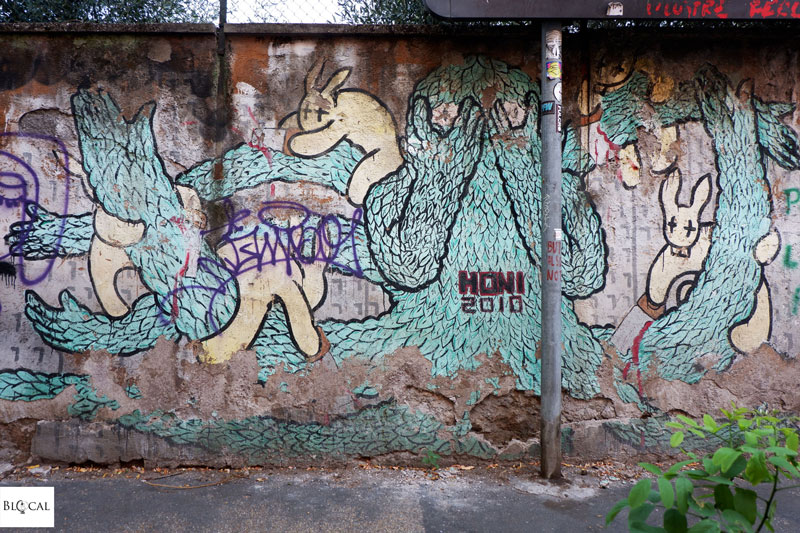 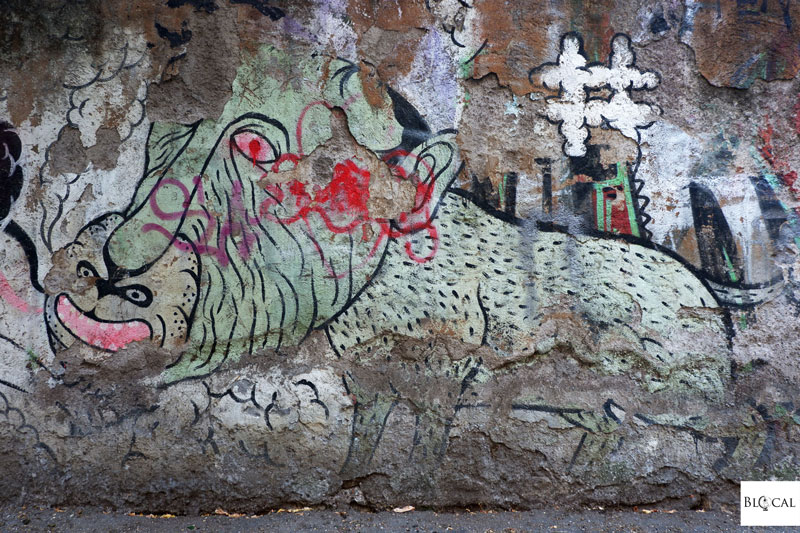 In more recent times, the collection of street art in San Lorenzo has been enriched with works of great dimensions, in line with the trend of muralism that has conquered numerous countries around the world.

Among these works, the best known are those made in remembrance of the allied bombs that hit the neighbourhood on 19 July, 1943; a sad episode that reverberates to this day in the form of empty spaces between the buildings.

In 2018, the MYllennium Award contest supported the realisation of two street art works in San Lorenzo, precisely on two apartment buildings that still show remnants of the war.

The first mural dedicated to the bombing raid on San Lorenzo was produced by Giulio Vesprini and Nulo at the junction of Via degli Ausoni and Via dei Sabelli. ‘Cerchio G38’ (‘Circle G38’) is an explosion of colour which unites the typical abstract features of both artists, which symbolise the power of colours against every war. 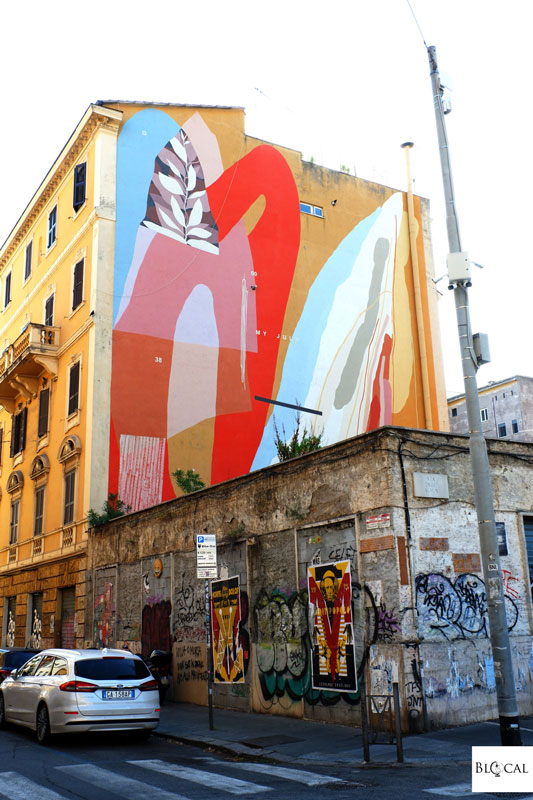 The other mural dedicated to the bombing raid is a tryptich painted by Guerrilla Spam, a collective that relies on the collaboration between artists, philosophers and architects. Situated in Via degli Equi, this majestic mural brings together the ruins of the Basilica of San Lorenzo, bombed in 1943, and an imaginary mosque in flames somewhere else in the present day. 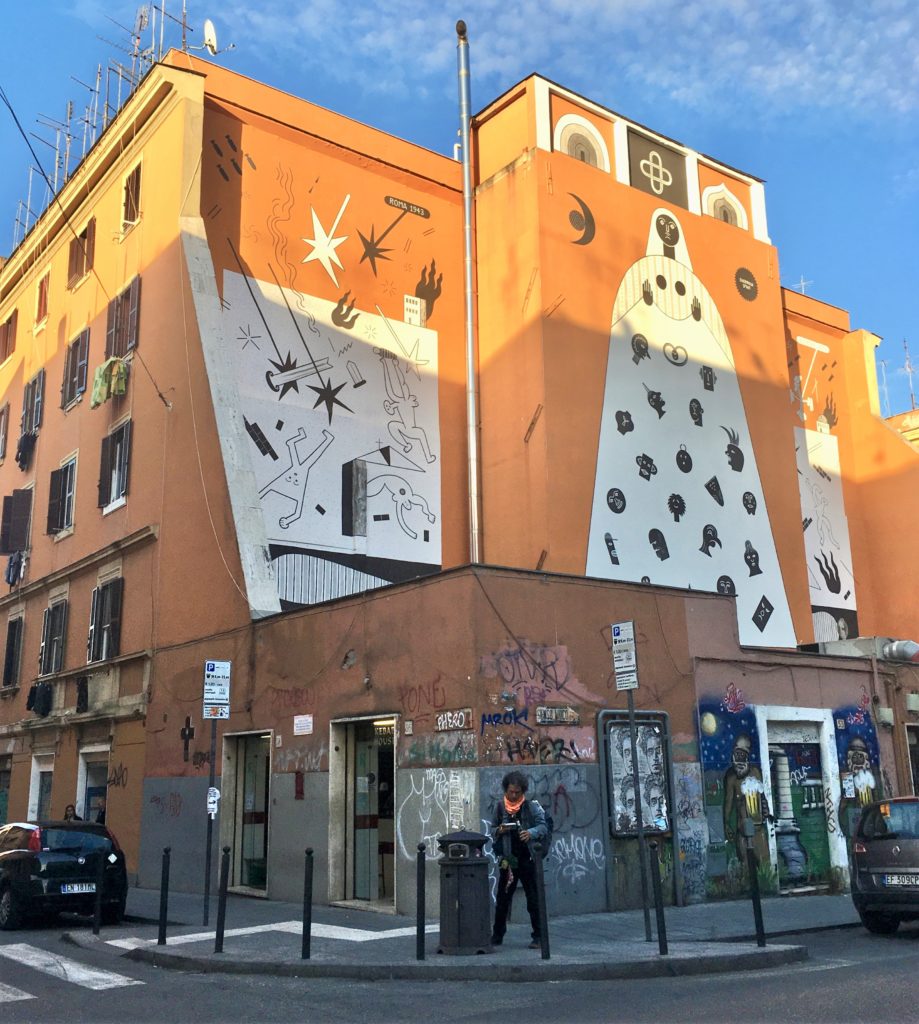 The innocent victims of war are all equal – that’s what is suggested on the central part of the wall by the woman figure, half-way between a madonna and mother nature. It’s interesting to note the connection between the three symbols depicted above this woman figure: a barrel vault, which is a common architectural element in many buildings in Rome, an ogival arch which typically accomodates a Buddha statue and – in the centre – a looped square, which in some cultures stands for unity and coexistance.

The 1943 bombardment also appears in the monumental diptych painted by Lucamaleonte who, for this work, was inspired by the identity of the neighbourhood. Situated in between Via dei Reti and Via dei Piceni, ‘Patrimonio Indigeno’ (‘Indigenous Heritage’) tells the story of the ancient countryside of Verano, of the martyrdom of San Lorenzo (the neighbourhood derives its name from the Basilica which was named after this saint – this element is illustrated in the mural by a capital) and of two places which are iconic for this area: the monumental cemetery of Rome (which is symbolised by the raven with the chrysanthemums) and the university (represented by the goddess Minerva).

Ultimately, the entire work is imbued with the partisan and antifascist spirit that has made San Lorenzo one of the centres of the Roman Resistance during the Second World War (illustrated by the red poppies). (photo by the artist)

Another mural in San Lorenzo for which inspiration was drawn from the soul of the neighbourhood is called ‘Nobody Excluded’.

Here, artist Luogo Comune wanted to give expression to the associative spirit of San Lorenzo, celebrating all of the squatted places and the realities of the area which in various ways are part of the struggle for integration and coexistance among the many different ethnicities living in San Lorenzo. 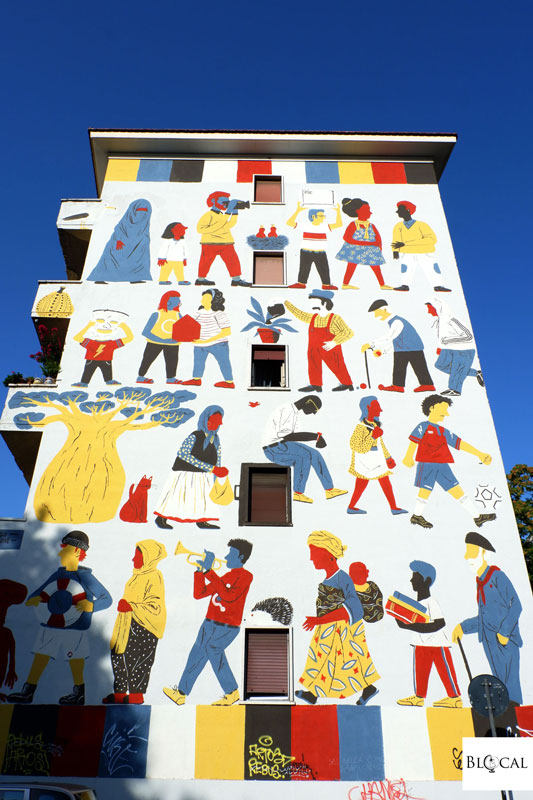 There are many independent social and cultural spaces in San Lorenzo. Among these is the Nuovo Cinema Palazzo, which I recommend paying a visit to. It has been squatted since 2011 by a group of artists, local inhabitants and cultural workers who have prevented the historic cinema from being turned into a casino.

At the entrance of the cultural centre we find a mural by Sten & Lex. The work dates from the period in which the artists created stencil art portraits. After having made cuts in the cardboard and applied colour (mostly black) to its slots, they entrusted their work to the passage of time and the changing weather conditions. 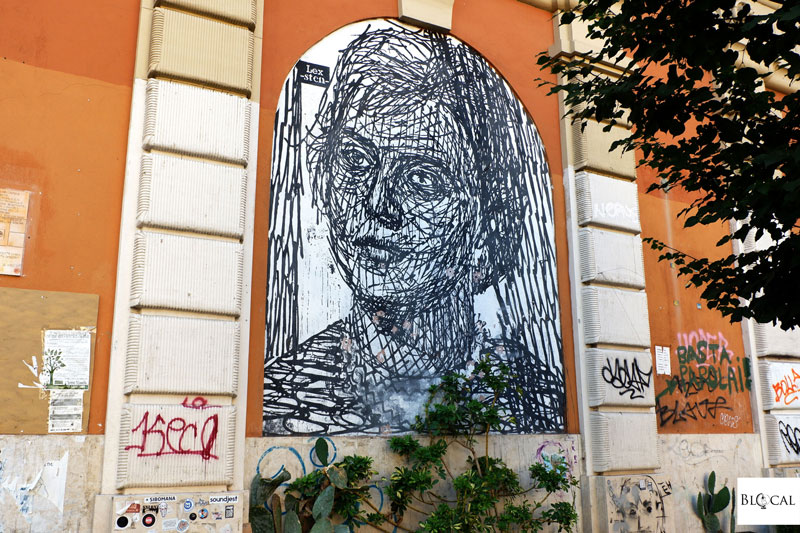 One particular mural that was created on 25 November, 2012 on the ocassion of the International Day for the Elimination of Violence against Women has had a great impact in San Lorenzo. Along the Via dei Sardi, Elisa Caracciolo created 107 white silhouettes that hold hands. Each one has a nameplate and a date on it, in remembrance of the homocides that were committed that year. Rather bitterly, another 162 silhouettes of victims were added to the work the following year. 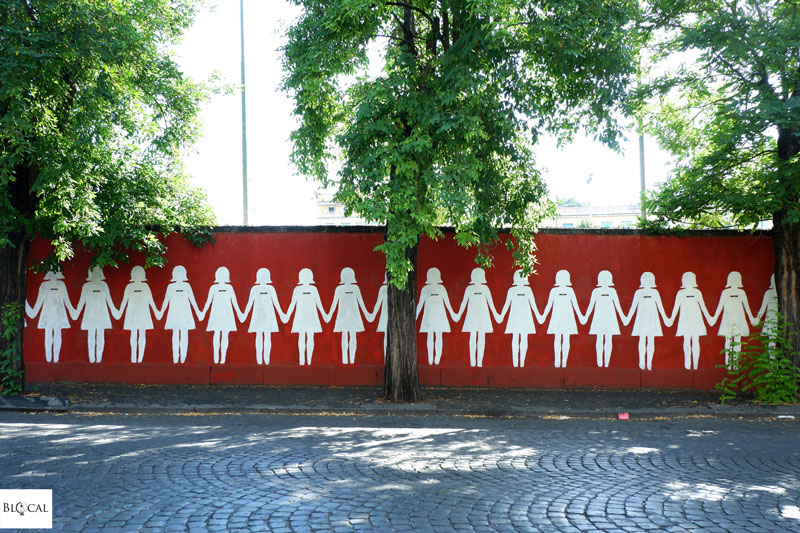 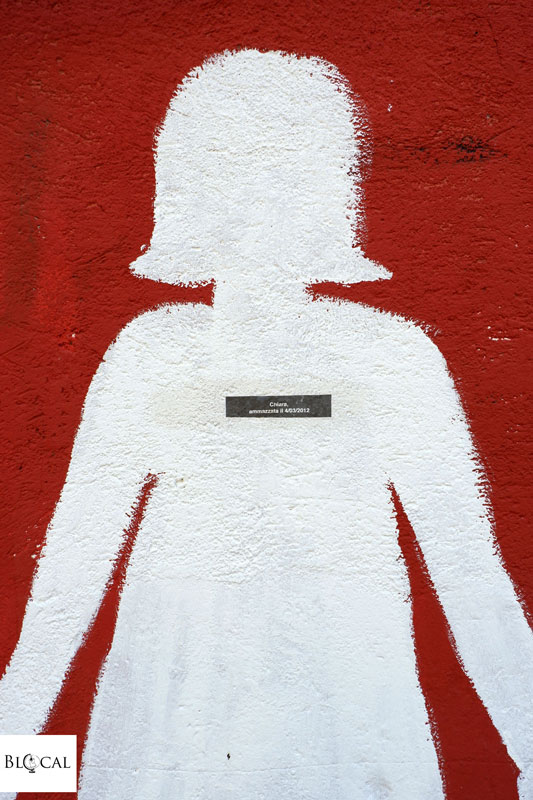 Yet two more murals that should not be missed when wandering around San Lorenzo:

1) ‘Tutti in Bici’ (‘Let’s all go cycling’) in Via dei Peligni by Simone Ferrarini, in collaboration with Collettivo FX. 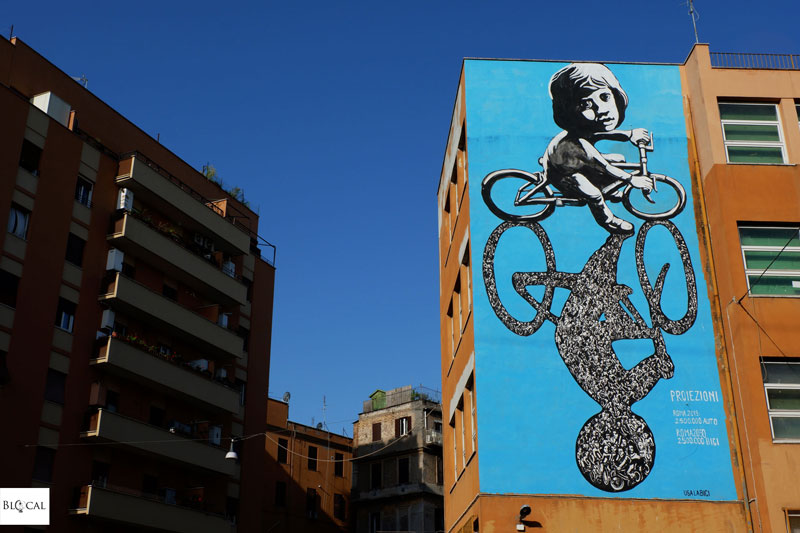 2) ‘Kidz are the future’ created in Via de Lollis by four local and long-time graffiti artists (Napal, Brus, Brek and Ade) on the ocassion of the 70th anniversary of the Universal Declaration on Human Rights; 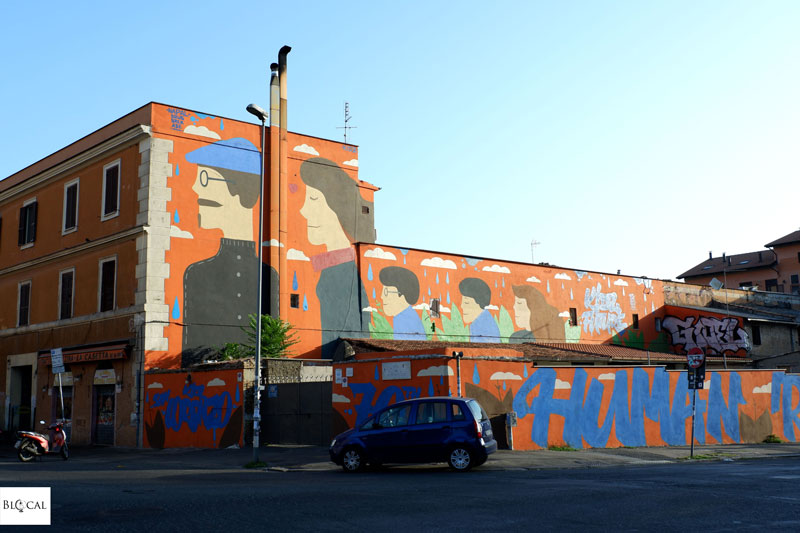 Finally, there is another trait of the street art in San Lorenzo which authentically ties it to this neighbourhood of craftmen’s workshops, pubs and restaurants that have been around for many generations.

Most shop shutters in San Lorenzo have paintings on them: they capture moments of everyday life and tell stories related to the commercial operations in the area, or – alternatively − they sport the pure lettering which brings to mind the tradition of hand-painted signs. 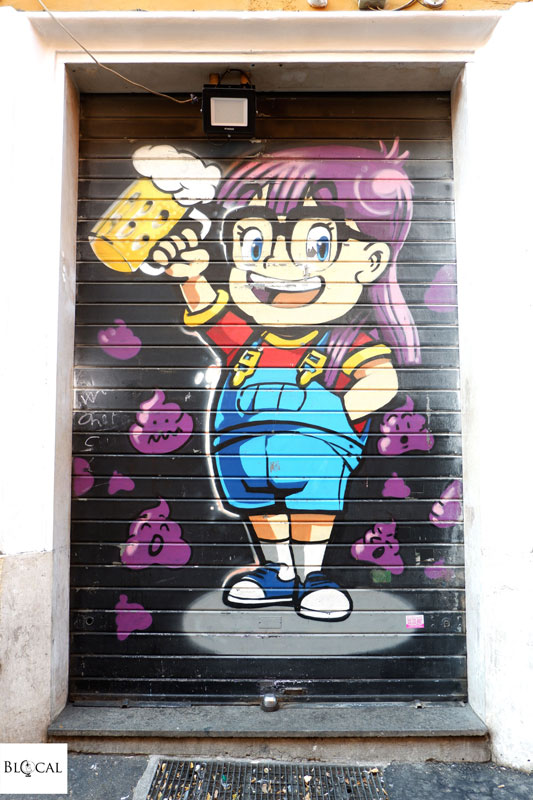 These artistic expressions are the spontaneous and genuine result of the encounters between Rome’s street artists and San Lorenzo’s shop owners, without the interference of curators or other ‘experts’. 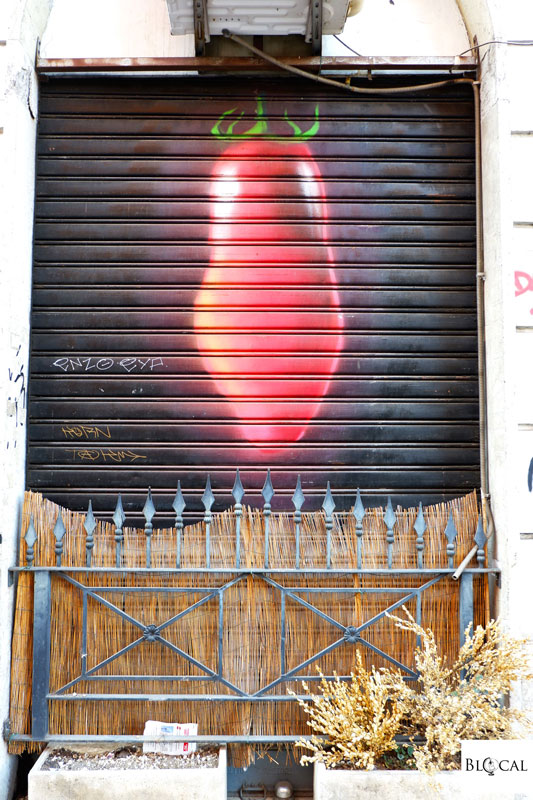 The beauty of these artworks lies in the fact that they are expressions of collaboration and reciprocal support between various actors that together make up the social fabric of this very diverse and fascinating neighbourhood. 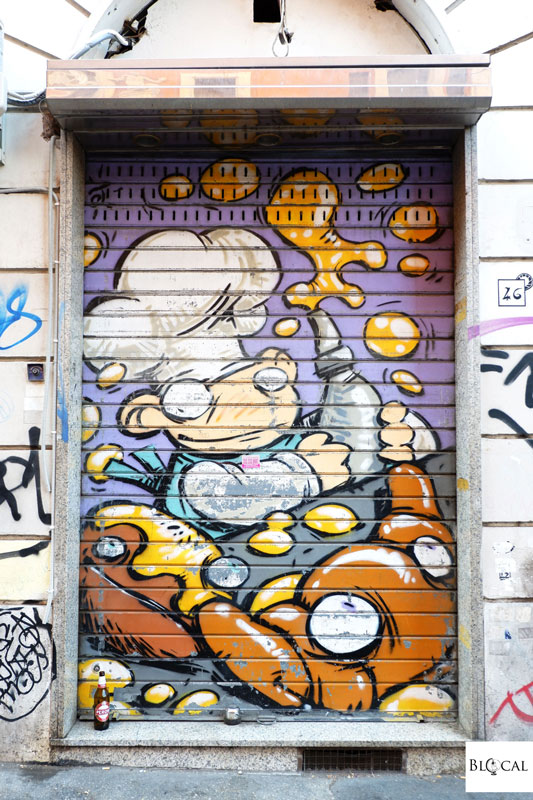 This article first appeared, in Italian, on You Local Rome

Find these and more local tips in my Rome Google map

Saying that Palermo is worse off is a gross understatement. Palermo’s palaces are, at best, beaten up, but in any other scenario they’re outright shattered. Yet their crumbling facades, which the North African sun and the sea breeze keep eroding daily, are what make Palermo so seductive.