It has been an amazing trip; my tendinitis got better eventually -even if I haven’t fully recovered yet- and so I’ve been able to walk around Sarajevo, to see many interesting places and –most of all- breath again that Balkan spirit I love so much. And even if the question I’ve been asked the most has been “where are you from?”, I’m very proud of my knowledge of the language (also because, let’s face it, I couldn’t have survived 10 days without talking to anyone!). During these last 3 days I’ve met Amira, a girl from the Couchsurfing website, and she brought me to smoke narghila at Dibek in Baščaršija, as well as introducing me to the best pita place in Sarajevo (Buregdžinica Asdž, of course!).

This sort of working-class district -built in the ‘60s/’70s- is not far away from the town centre: you can reach it by a 20 minutes’ walk from Alipašina Mosque (if you don’t happen to have tendinitis…) and it is a great place where you can mingle with locals and enjoy some truly Balkan spirit, starting from the flea market where you can find fruits and vegetables, Bosnian specialties as well as clothes and artisanal crafts. I went there because a friend told me to go graffiti hunting among Ciglane buildings from the communist era, which are constructed on a fairly steep hill; there is also an elevator you can take to get until the very last raw of buildings, from where you will enjoy an amazing view over the town. In Ciglane you will also find a big park and several restaurants and cafés to relax.

I’ve already been in Vratnik with Darijana to enjoy the view from the Žuta Tabija (the yellow bastion), but I couldn’t get enough and the day after I came back to admire the town from a higher viewpoint: the Bijela Tabija (the white bastion), which is just a ten minute walk away from the yellow one. From the ancient fortress (according to the most established opinion it has been built in 1550) the view is breath-taking, and you can even climb it to take more spectacular pictures. In fact locals say it’s a place designed for historians and photographers! Coming back downtown, you can enjoy this characteristic neighbourhood built in the XVIII century and fortified in 1816, its old houses with picturesque red roofs and its ancient mosques (some of them even with a wooden minaret or a wooden balcony), among which the Lučevica Mosque, which has been built in 1560.

Here I’ve found the most beautiful, magnificent buildings in Sarajevo. This neighbourhood rises up on a hill (the hill behind Baščaršija), so from Bjelave you can enjoy a great view over the old town. The best thing in Bjelave is to wander around, it is an authentic neighbourhood which has nothing to do with the touristic Baščaršija, and wherever you go you can admire its beautiful buildings, which range from Austro-Hungarian to decaying and from Turkish buildings (among which the well-known Svrzo House) to bricks houses. In Bjelave you can find some beautiful street art too!

When my tendinitis was especially hurting, I loved to rest a bit and enjoy a nice cup of tea in some characteristic tea houses. Two of them really got into my heart, not only thanks to the very good home-made blends they are serving, but also because of the nice Bosnian people running them.
The first one is in Bjelave neighbourhood and it is called “Franz & Sophie”;  it is a small tea house very popular among locals, run by the first tea-sommelier of the region, who would kindly advise you about what to order. Here you can find many organic teas from all over the world but also some homemade special blends (which are really good, I’ve tried ‘em all!).
The second one is called “Džirlo” and it’s on the way to the Kovači cemetery; it is run by a kind man who lived 22 years all around Italy (and proudly tells his story to all Italians stopping by). The place is small and really beautiful, and the tea blends are very good too.

Sarajevo is full of street food kiosks where you can enjoy the best of Balkan food, but if you need a proper meal you can check these two restaurants, both of them frequented by locals.
The Šahovski Klub (chess club) is near Maršala Tita and it is a very characteristic place where you can eat traditional Bosnian specialties without spending a fortune. There is a truly Bosnian atmosphere in there, with old people playing chess and barren furniture. I had a soup and a traditional “sarma u japraku”, both very restoring after the long walk in the cold I had in the morning!
The other restaurant you can’t miss in Sarajevo is Avlija:  the venue is colourful, with many plants coming down from the ceiling and more strange objects decorating the walls and the bar. The waiter is a very funny guy (who was constantly challenging me to eat all the food I’ve ordered, but obviously he didn’t know with whom he was dealing!) and the atmosphere is youngish, with many locals going there just to have a drink on the many colourful benches in the middle of the restaurant.
I really had a great time in Sarajevo, the town is very beautiful and Bosnian people are extremely lovely. I hope I will come back soon, and I’m sure I will -even if only for all the coming-back-to-Sarajevo water I’ve been drinking from the fountain at the Gazi-Husrevbey Mosque! ;-) 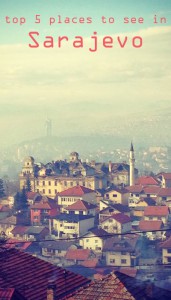 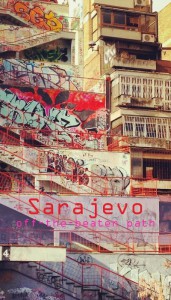 The post-travel syndrome: I’m back at the other side…