Inspiring City’s Stuart is my official street art festival buddy. We attended together festivals all around the UK, often sharing an airbnb alongside beers, laughs and blogging tips. I could never leave his voice out from this series of interviews with my favorite street art bloggers: his constant support has -in fact- brought me until here :)

Stuart started his award-winning blog Inspiring City in 2012 after having moved to East London, where he was constantly stumbling upon all the amazing street art in Brick Lane and around Shoreditch. Fascinated by the ever-changing art in the streets, he wanted to share his discoveries with as many people as possible.

I came from Yorkshire, where I had no interest in art whatsoever. As I was getting to know my new neighbourhood, I noticed that the walls were changing all the time: paste-ups, tags, throw-ups, everything. My senses were blown

Stuart’s blog started as a website covering “all things in London” and then it slowly narrowed to the art in the city: street art at first and wider art after that. Today, “Inspiring City” is one of the best websites where you can read about emerging artists in the UK scene.

Stuart, Inspiring City blog: “I like to write about emerging artists because there’s very few voices in any sort of media that would cover that. Sure, you got Instagram; but if you really want to find something -let’s say you want to learn about an artist- you are not going to Instagram. Rather, you are googling it. And you’ll end up on some blogs. I like emerging artists because I like to be able to give a platform where you are going to see what people are doing” 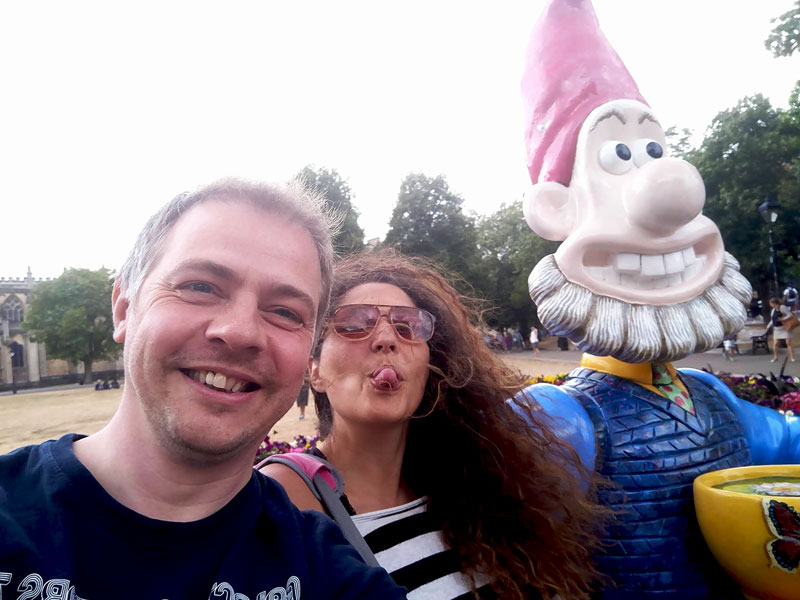 Stuart selects the artists he covers just according to his personal taste (he has a soft spot for figurative art) and the uniqueness of their work.

Stuart, Inspiring City blog: “It happened that I wrote about an artist whose pieces I wasn’t so much into at first, but what he was doing was so interesting that I needed to find out more. That was the case of my interview with Cakes Stencils, an artist that I discovered when I traveled to Bethlehem to visit Banksy’s Walled Off Hotel. I don’t think anyone has ever written about him and I’m glad to be the one who brings his story to the world. He has such an interesting story” 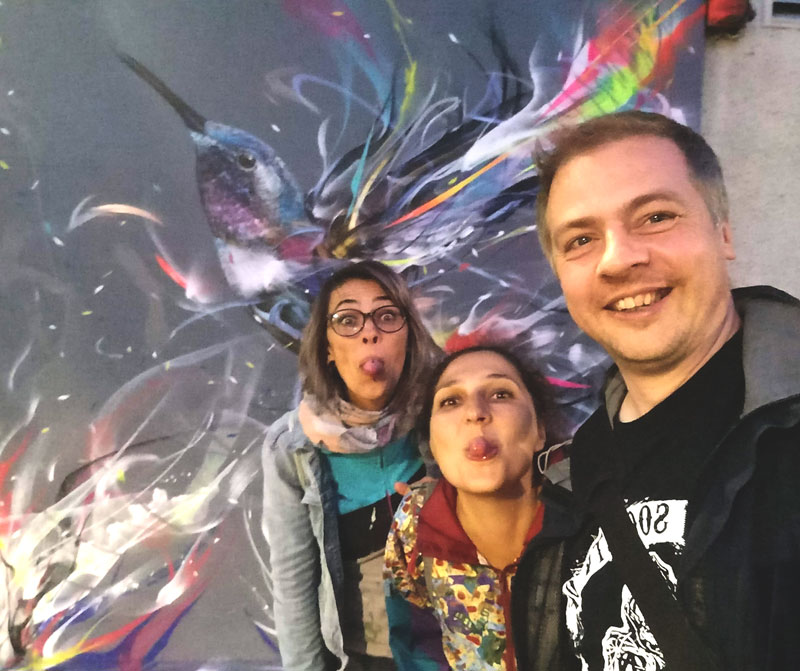 Interviews are one of Stuart’s favorite things to write, as he enjoys speaking to people and researching original content.

Stuart, Inspiring City blog: “I like to write about artists that nobody has covered before. It obviously takes time, but it is worth it. I don’t earn any money from my blog, so my motivation comes from writing a quality piece. When I was young I wanted to be a journalist, but that was such a long time ago. I never was a journalist, I worked in cinemas instead. So writing a blog was quite new for me -I hadn’t any experience at all, I just went straight into it- but I like it, because it gives me a creative outlet. I like to have an interest outside of work: I work in healthcare regulation now, which is definitely not the most creative field I could find, so I like to have my writing to do afterwards” 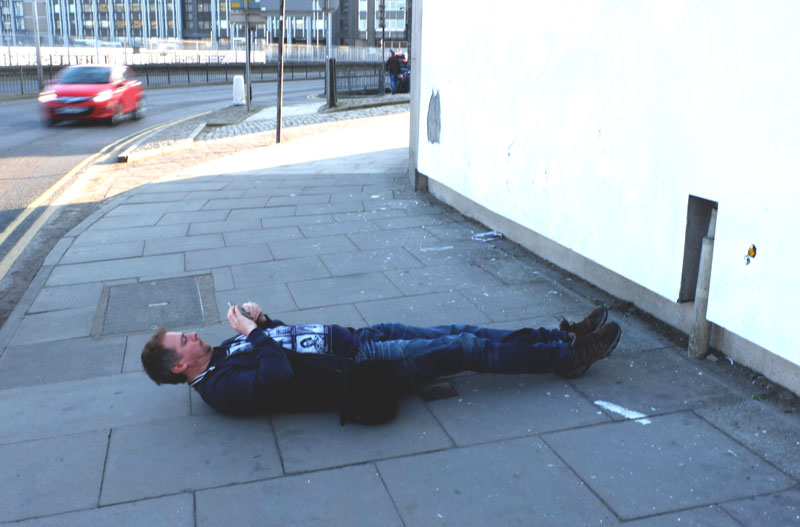 Getting his pic of Snik’s mural at Nuart Aberdeen 2018

As any other successful blogger, Stuart is also very tenacious: he now posts once or twice a week, a frequency that requires enormous commitment.

Stuart, Inspiring City blog: “You know how it is, how it works if you are going to write a quality piece. I spend quite a lot of time on each post now, sometimes days, working days. You have to travel there, take the pictures, write the thing and then you are going to come back to it and come back to it and come back to it. Sometimes I do what I call a ‘fluff’ piece, meaning just pictures and something like “this artist was in town and he painted this wall”. Flufff. It’s still good because my readers wanna see that, they like to know what’s happening, but in terms of writing the ‘fluff’ piece isn’t so interesting for me. A ‘fluff’ piece is also when I do a piece from a press release, although I always reshape it and publish it in my own way. It’s good because it gives me content, although you can send me all the photos you want and all the press releases you want, but I will still need the time to sit down and write the piece” 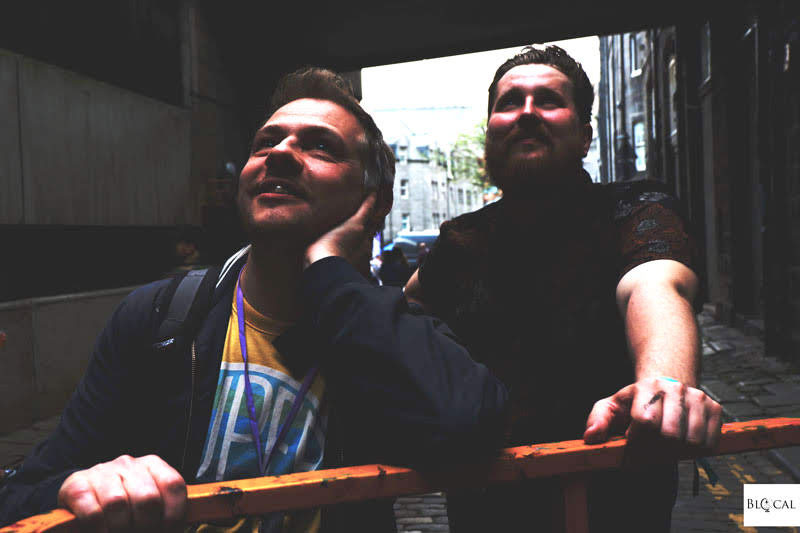 Besides “creating original content”, another ‘rule’ that Stuart applies to his blogging vocation is: never publishing something negative.

Stuart, Inspiring City blog: “I totally agree with what Jon Reid shared in the interview you published on your blog. There is no way I will publish a post about something I wasn’t interested in. My blog is my space, it’s my voice in the world, and I don’t want to be a negative voice. Even though ‘negative content’ might be clickbait, I’m sure people can see through it. Another thing I care about is to always have a sense of myself. I keep reminding myself that I might travel around but my core is in London and its emerging artists. That’s what I’m really interested in and what I want to keep blogging about” 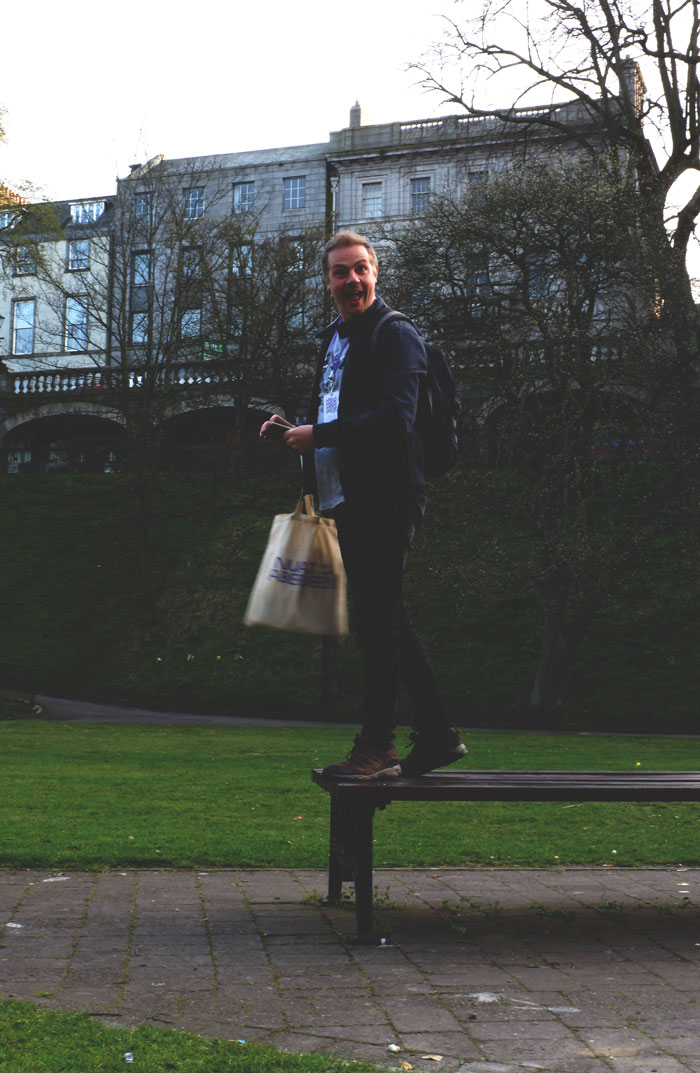 Since he believes that the key of being a successful blogger is covering topics you genuinely love, on his blog Stuart also writes about his other passion: history. His biggest post ever shows where to find Jack the Ripper’s murder locations in London. He also likes to write about historical facts of his city, especially of the area where he lives (East London), where – according to his blog – amazing things happened all over the centuries.

Stuart, Inspiring City: “I prefer to write a long history piece than the ‘10 best murals’ kind of post, which is never gonna be simple anyway, because you still need to understand the details of some of the murals. I don’t ‘have to’ do any of that, of course, but if I’m inspired by something or I have an idea about a post that would be nice to write I have a place to put it. If I were doing this for someone else, like a job, it won’t be the same, I won’t have this freedom. However, I do check the analytics every now and then, but I won’t get involved in what every single post is doing” 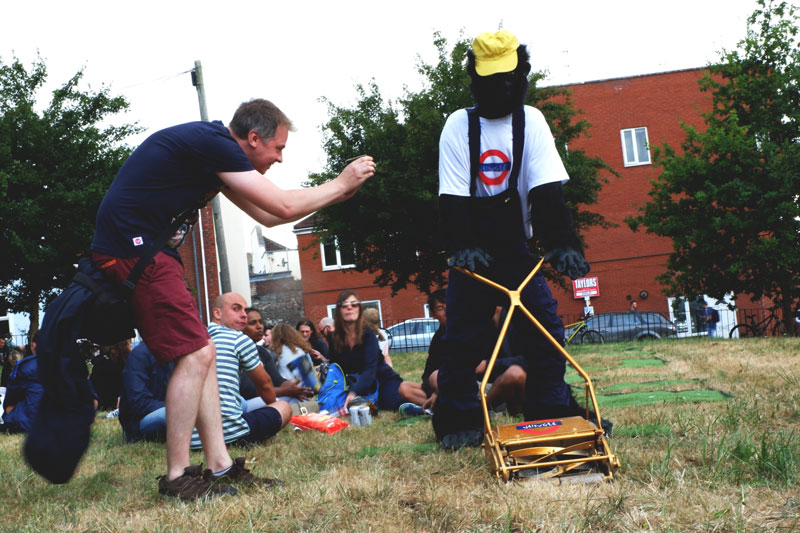 “Stop looking at the stats” is also Stuart’s piece of advice to get over those ‘downtime moments’ we all get while blogging.

Stuart, Inspiring City blog: “For me, a downtime is when people seem to not be appreciating my work, or I just seem to be getting ignored in some ways, or passed over. Sometimes I think people don’t realize how much time you have spent on a piece, working days to put it together, for nothing. It’s frustrating, of course, but it’s part of the game. What I do then is step away from it. Going for a walk, playing the guitar, anything else that would keep me away from the stats” 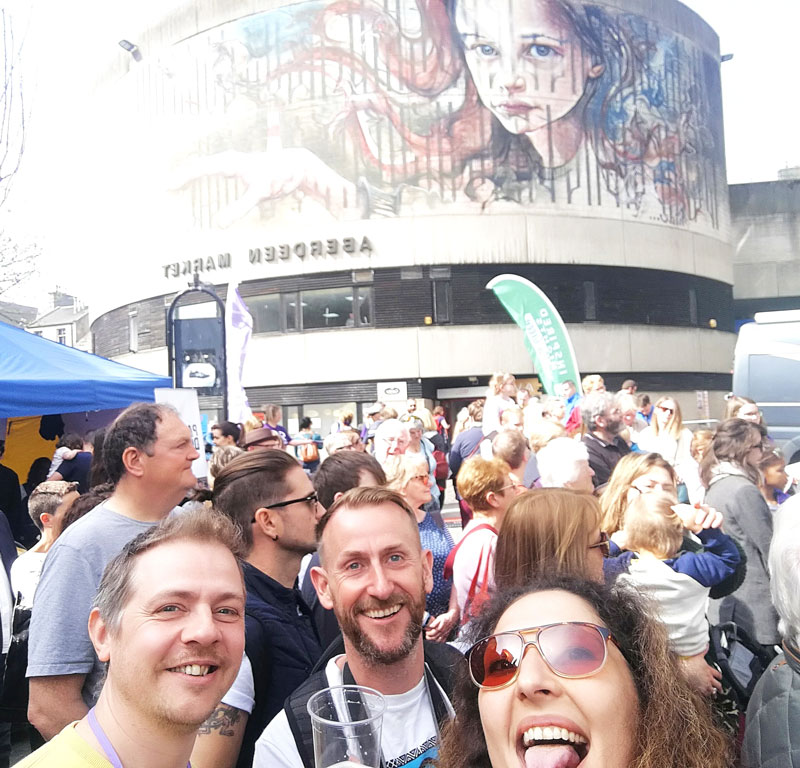 Personally, lots of my ‘blogging frustration’ comes from social media and the fact that sometimes people don’t see past your Instagram account*.

[*That’s what triggered this series of interviews with my fellow street art bloggers in the first place: I needed to hear their opinion, and somewhere along the way I thought you might be interested in it too]

Stuart, Inspiring City blog: “I don’t think blogging is dying: people still want it, they still consume it. True, Instagram particularly took over, because that’s how people are passing information nowadays: just as quick as it is happening. Instagram is a major media channel, especially among artists. They are using it and they are not going out of it. But for me, my major channel is my blog, so I want to move people to the blog. There, they can actually read a lot more and see lots more pictures. But a blog is just not the “go-to” place anymore, so I’m very much relying on search on Facebook or on people sharing my articles. And then I use Instagram as a tool to bring people to the blog, for example by posting a fancy graphic to announce a new blogpost. My next big thing is the newsletter, though, and I was inspired by you, actually. Now I’m trying to grow the mailing list and to write a really quality newsletter. That’s cool, better than social networks and it makes it easier for the reader, because going to the blog and leaving a comment has become a barrier in the latest years. We need to ‘adjust’ our strategies if we want to keep going” 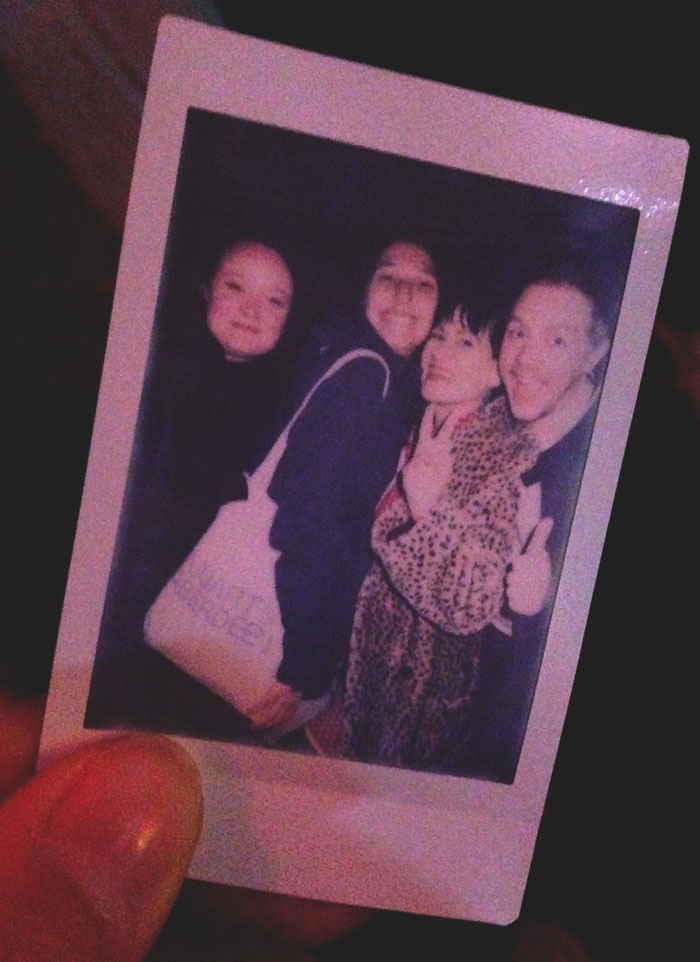 Back in Gent for Sorry Not Sorry street art festival

Morcky and the Beginning of Figurative Graffiti in...