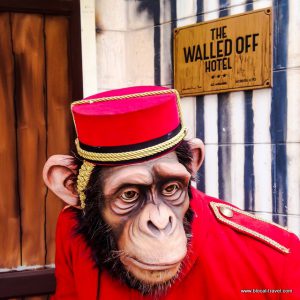 When Banksy opened The Walled Off Hotel in Bethlehem, everybody had a strong (and often negative) opinion about it. They said he sold out, they said he is making a profit from other people’s misery, they said he betrayed ‘the street’. They said these and many other things, although none of these people had actually been on the corner between Caritas Street and the infamous wall.
Well, I was at Banksy’s controversial hotel in Bethlehem, and I liked it.

The building is just a common Bethlehem building, on whose dull façade columns, balconies and overflowing pots have been stencilled. It overlooks the wall that separates the nation of Palestine from the state of Israel, at the corner of two shattered streets. 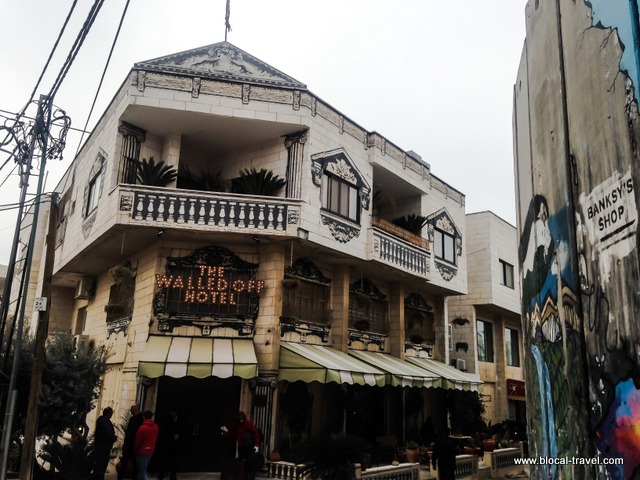 The sign, which is made up of light bulb letters shining through the dusty air of Bethlehem, is the first hint that you are about to enter a parallel world. Under the sign, a hardworking (although clumsy) bellhop-monkey is taking care of the suitcases, while the concierge-in-flash and his grim “welcome” are straight out of Dismaland. 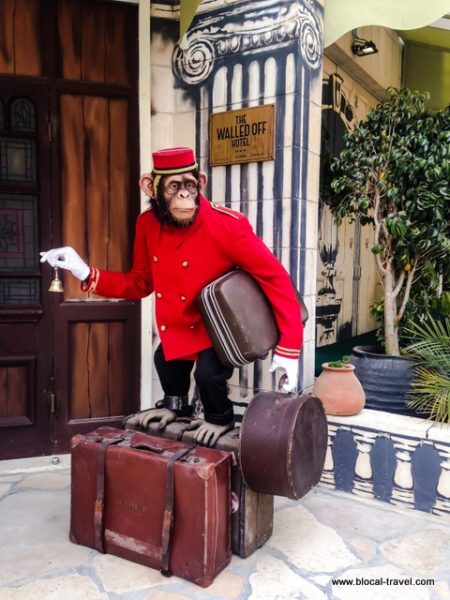 Red curtains open onto the Piano Bar, which recalls a sophisticated English tea room, with Chesterfield sofas, panelled ceilings, suffused lighting, floral wallpaper and precious china. As soon as your gaze has wandered, you catch all the quirky, twisted, Banksy-style details. 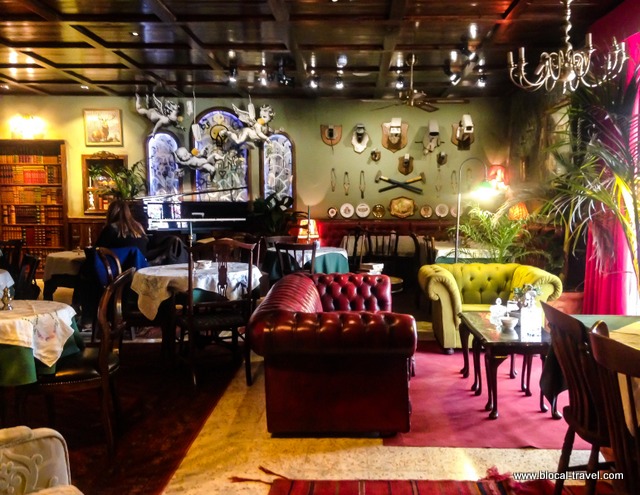 First of all, the piano is playing classical music, although nobody is sitting at it. Above the piano, cupids fly seraphically, although they wear oxygen masks. 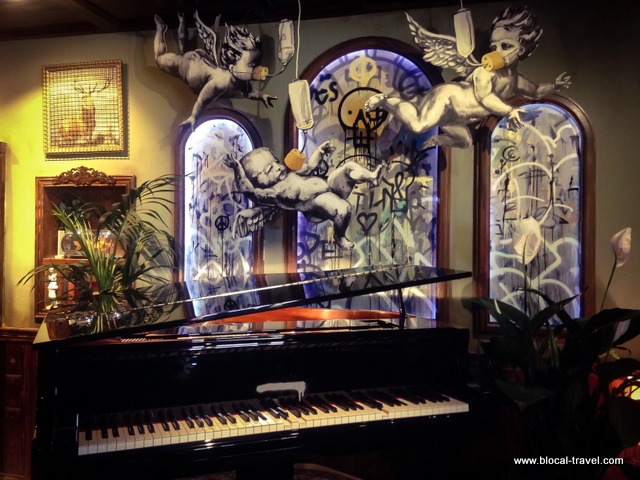 CCTV cameras are hung on the wall as if they were mounted deer heads, and a flammable material sign is ‘burning’ in the fireplace. 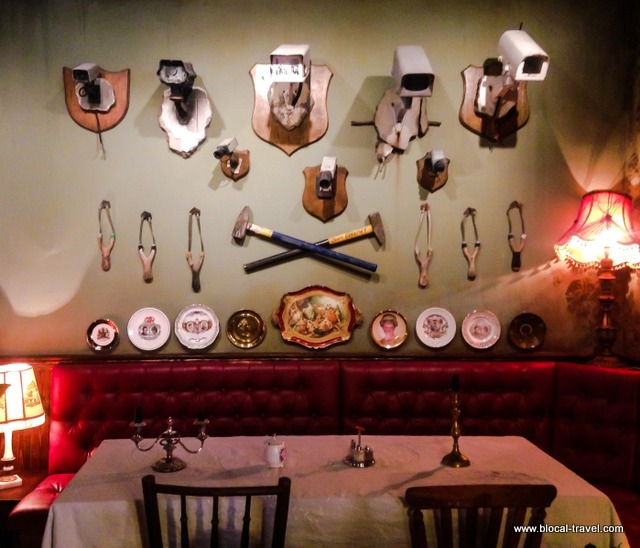 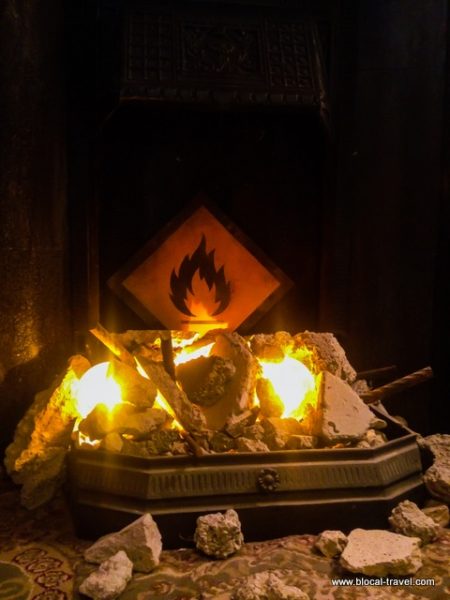 All around the room there are ‘The Bust of the Rebel’, which already went viral on social media, two goldfish flirting from different bowls, the secret bookshelf door, and several paintings. My favourites include one featuring children swing riding around an army watchtower, which revisites a mural he painted in Gaza back in 2015. Also the triptych with Banksy’s iconic rebel throwing the bunch of flowers that –here- is an actual bunch of flowers strategically put in a vase in front of the rebel’s right hand. 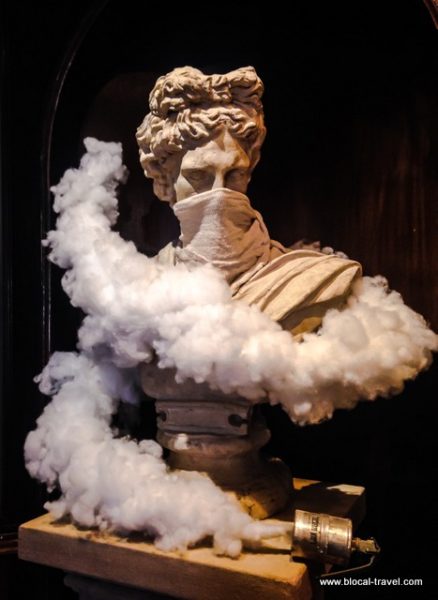 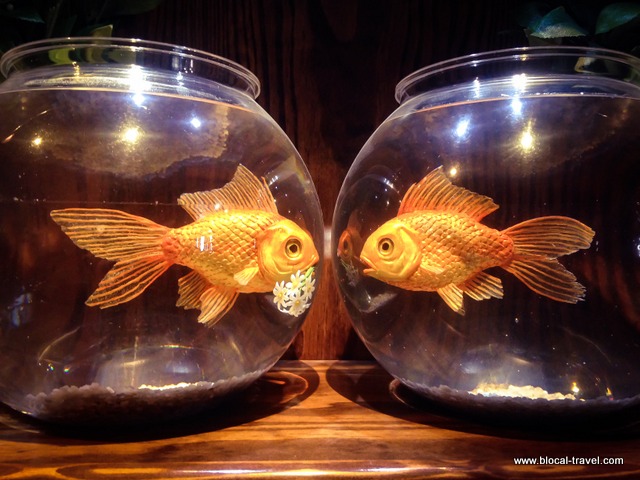 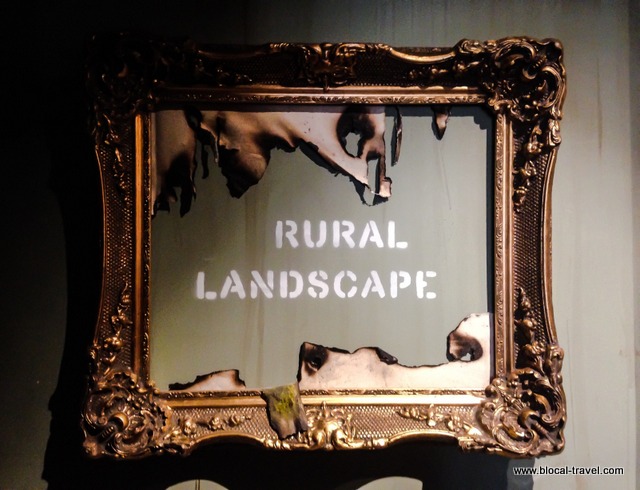 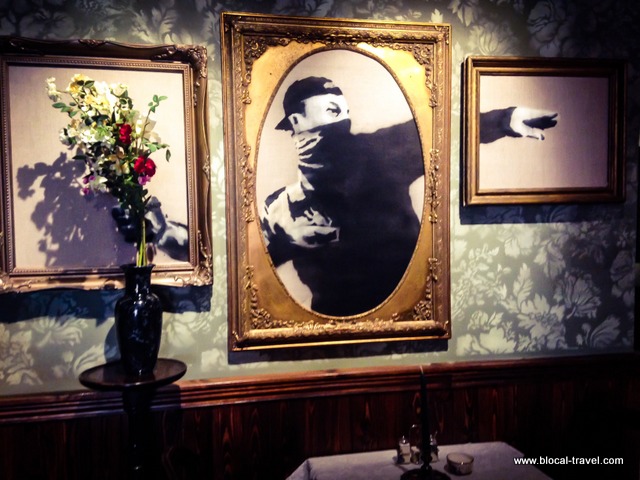 My favourite installation is right next to the reception desk and it depicts a cat trying to seize a caged dove. I love the precarious balance of the cat, and the sharp way this supposedly dynamic scene is frozen. 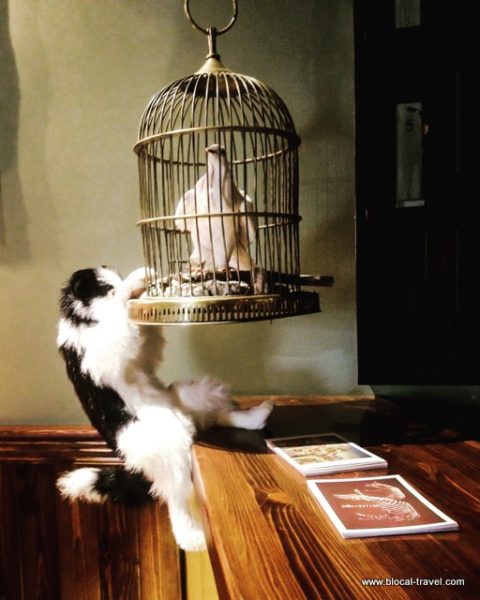 The Piano Bar area is open to non-residents, who can come to enjoy a ‘mocktail’ (it’s a Muslim nation, after all!), salads, cakes and the quintessentially-English afternoon tea. 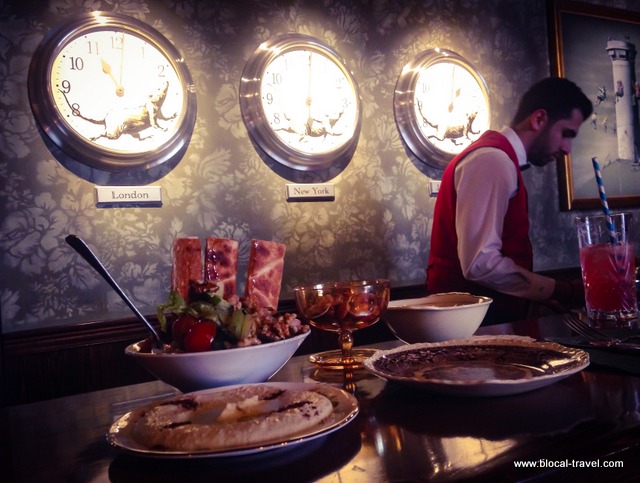 I had an ‘Earl Grey & Tonic’, which was so good that it made up for the absence of alcohol. Afterwards, I was off to the upstairs Art Gallery, which is currently showcasing artworks by the Israeli artist Anisa Ashkar. I then visited the Museum, which looks at the wall from different angles and traces its history since its construction in 2002. 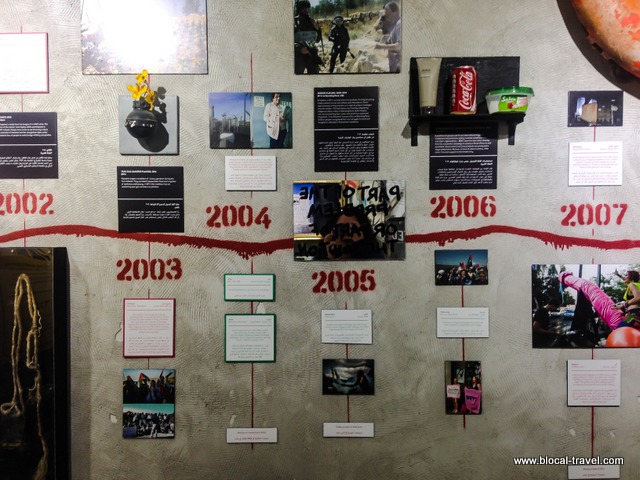 The Madame-Tussauds-kind-of-spooky statue at the entrance of the museum recalls that “it all began 100 years ago with an Englishman and the stroke of a pen”. The museum displays different things, from ‘Visit Palestine’ posters to the camera that stopped the bullet fired by a soldier during the protests in 2005. It saved the life of the cameraman Emad Burnat, who then showed the resistance in the Bil’in village in his award-winning film ‘Five Broken Cameras’. 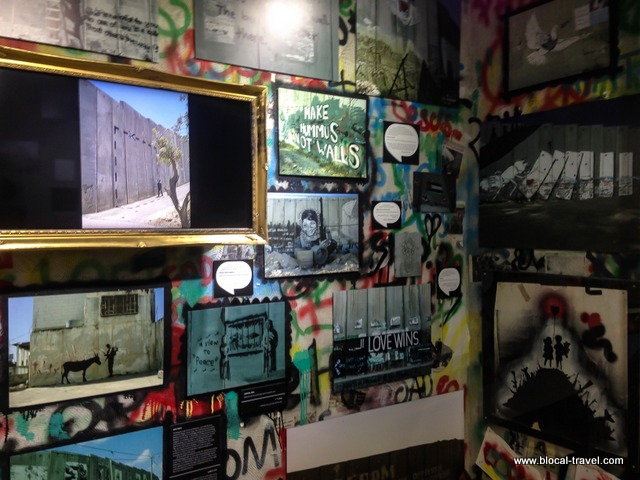 There are sculptures by the Palestinian artist Iyad Sabbah, from the iconic artwork that originally stood as public sculptures in Gaza and was heavily bombed. There is also a sculpture by Banksy himself, who twisted a well-known Biblical adage into a more fitting “an eye for an eye, a tooth for a thousand teeth”. 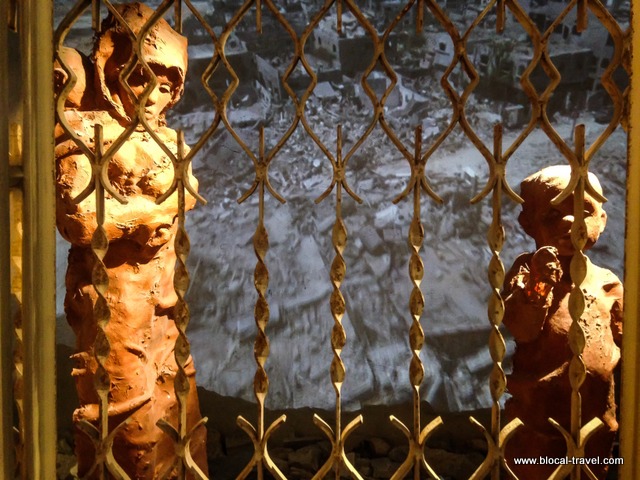 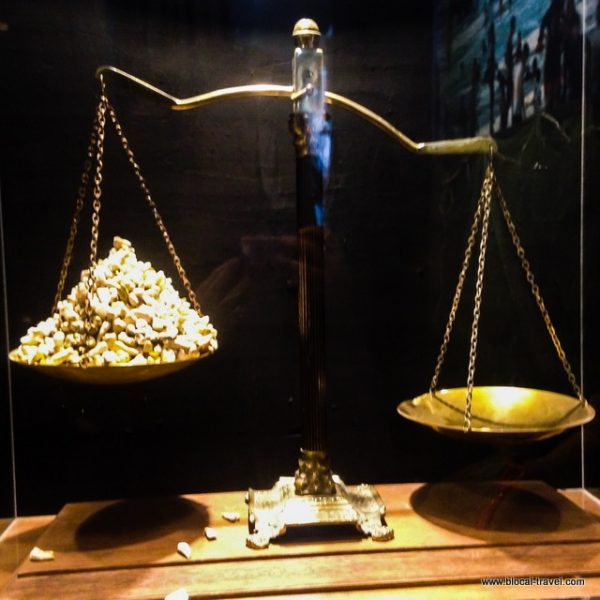 Banksy’s Walled Off Hotel is a bubble suspended in the chalky air of Bethlehem, a town where streets are crumbling and buildings derelict. Its red curtains, as the entrance of the rabbit hole, let you enter a sophisticated world that could be ages away from the reality surrounding it or, perhaps, it could be just on the other side of the wall. 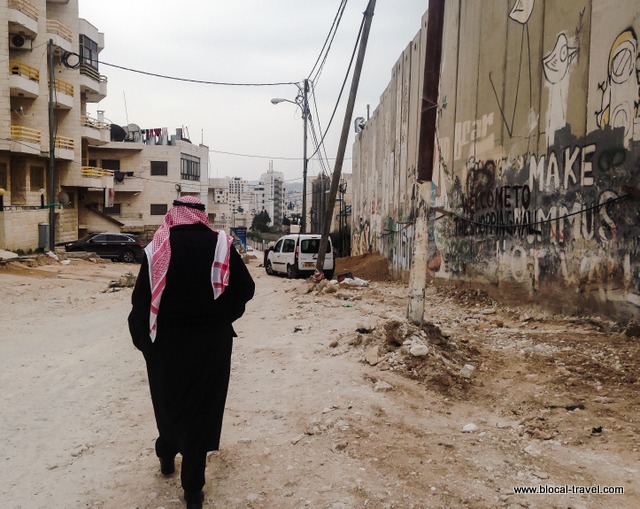 It’s the ultimate artwork, one you can actually walk through, and marvel at the accuracy of the tiniest details and at how the whole awesomeness is even more than the sum of its parts. Once again, I can’t help but state that Banksy is a genius, perhaps the greatest artist of our times.

Subsequently, he is not the Secretary-General of the United Nations, or any diplomat responsible for the Middle East peace process, although his Walled Off Hotel brought the military occupation of Palestine back to worldwide attention.
Yes, one night at his hotel costs more than the monthly wage of a Palestinian: he opened a three-star boutique hotel, not a council estate. 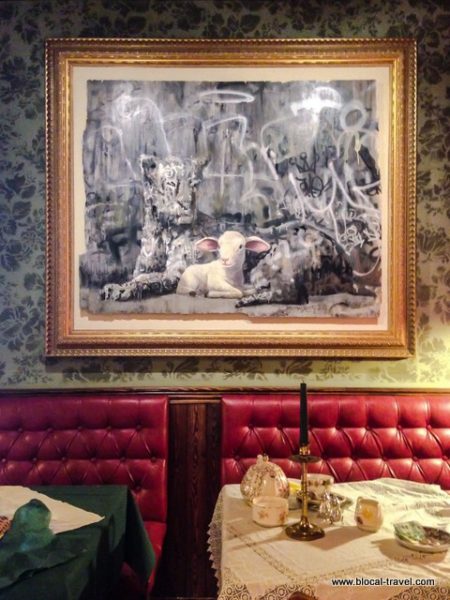 Moreover, although the economic situation of Bethlehem isn’t his responsibility either, the hotel is amplifying what his murals were already doing for the town. 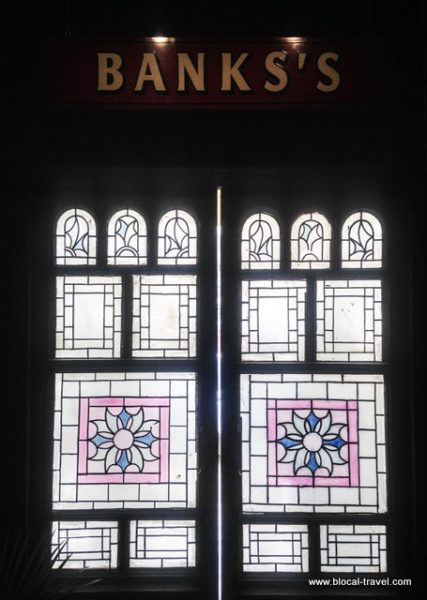 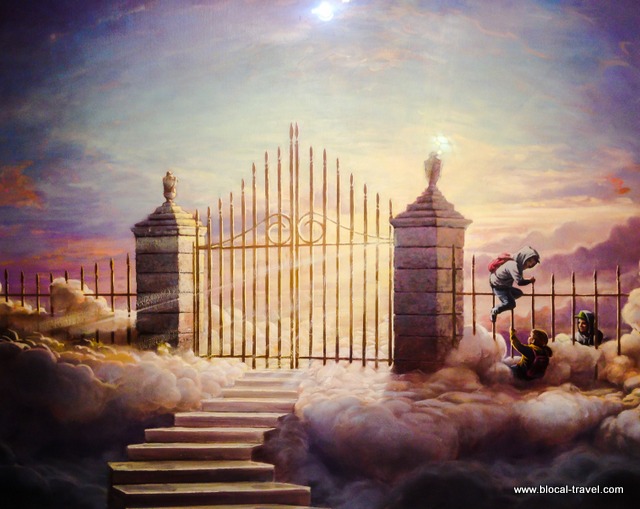 It was on my way back to Jerusalem that I fully understood Banksy’s operation, his final aim –or that’s how I like to think of it.

Hitting one pothole after another, the bus exited Bethelem and stopped at the checkpoint. The doors opened, Palestinians got out and diligently queued up at the checkpoint to be inspected. While I was looking at the queue of veils meekly reclined, two Israeli soldiers got on the bus and walked back and forth, balancing their body with the burp guns. Once the Palestinian passengers were re-seated, the bus started once again –this time faster.

I couldn’t help thinking that the trip to Bethelem, with its dusty roads and the checkpoint, is itself part of the experience of visiting Banksy’s hotel. Actually, it’s going through all of that in person that will provide a deeper understanding and reflection about the conflict.

Someone could say this, in Palestine, was already visible before Banksy had built his hotel in Bethelem. But the only people visiting Palestine at that time were already conscious travellers. Now, however, thanks to the Walled Off Hotel, many more people will witness the impotence of Palestinians and their life under the occupation.

PEEK THORUGH || You can see Banksy’s hotel in my travel video “2 weeks in Israel and Palestine… in 2 minutes!“ 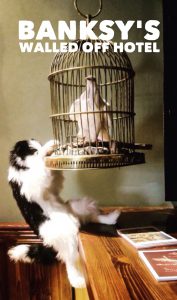 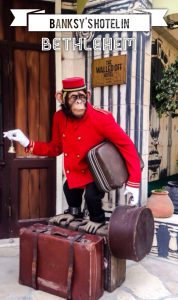