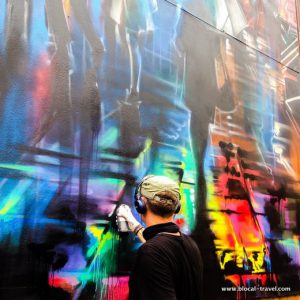 “If you gonna do something,

if you gonna actually take the time to do something,

you have to give everything you can,

otherwise it is not worth doing it.”

I watched him working on the same spot for more than one hour, standing back from time to time to contemplate from afar a tiny area that already looked perfectly fine to me, then stepping closer again and driving the spray-can instinctively across the wall. 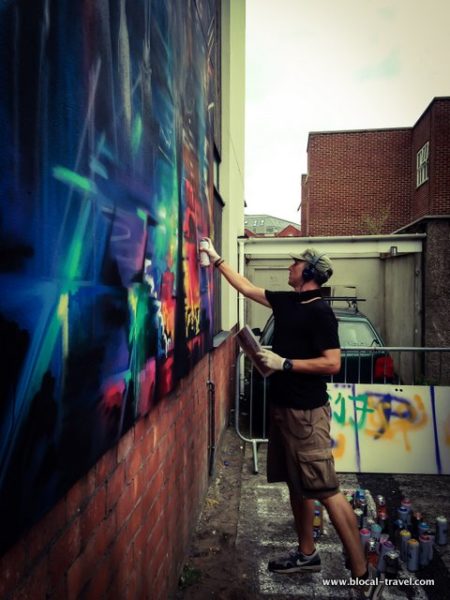 Later on, when we were sharing coffees and jokes about perfectionism, he confessed to me that he always strives for excellence –in art as well as life-, otherwise he doesn’t see the point of doing something in the first place. He is always throwing himself headlong, no shortcuts or compromises, giving all his energy to the project even when he knows that that mural is going to be destroyed, as happened to the futuristic geisha he painted in Bristol during Upfest 2015. 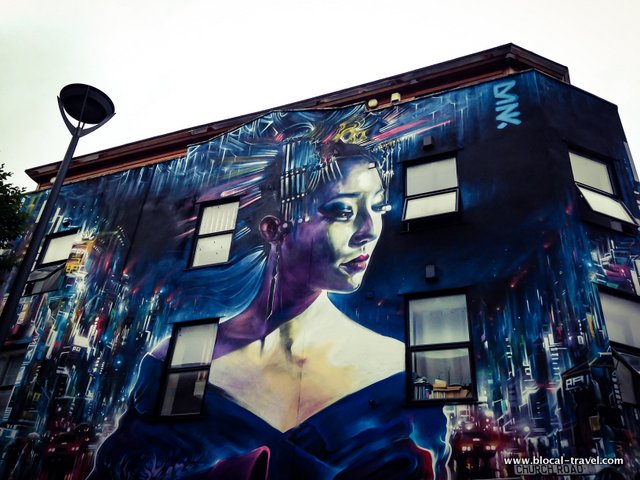 Dan knew what was going to happen (the Upfest law may be harsh, but it’s the law) and, nevertheless, he came back to refinish the wall, with a painful tooth infection to boot! If I had known earlier, I would have started a “save the geisha” campaign among locals, I swear!

But, as he is one of the most positive, cheerful and optimistic personalities I have ever met, he also highlights the bright side of the Upfest law: if his mural had stayed there for years, people would have stopped looking at it. The piece would become a background that nobody noticed anymore, but just walked past during the daily routine. By changing every year, instead, street art re-energizes the area, and residents will always be excited about it. 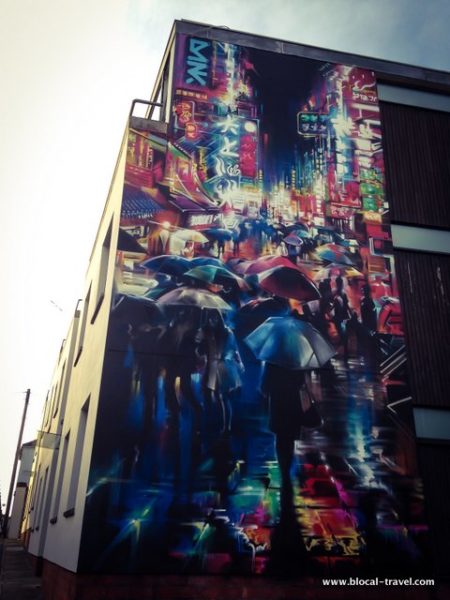 This is something I could see happening right in front of my eyes during my chat with Dan: several people came to the wall to tell him that they were upset that the geisha was painted over, but glad that he was back in Bristol to paint a new mural for the neighbourhood. 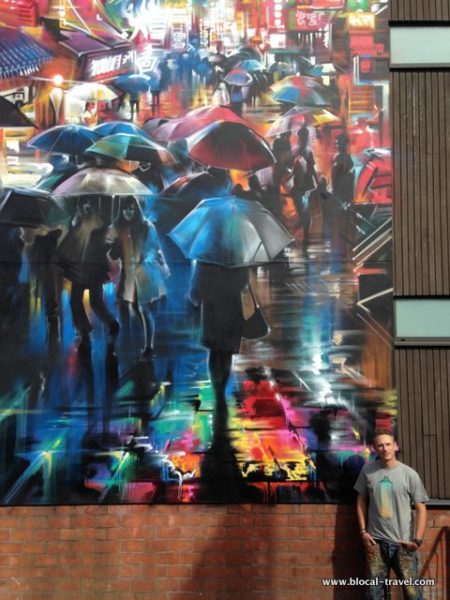 A kid asked for an autograph on his black-book (“So, when you asked me to sign it, you actually meant ‘draw’?” Dan teased him), a lady wanted to take a picture with him, and many other people just came to congratulate him on his piece and shake his covered-with-paint hands, which are as much a part of him as the smile he wears. Even the owner of the building came out, looked at the mural and, without saying anything, went back inside (“Well, you can’t please everyone”, Dan joked). 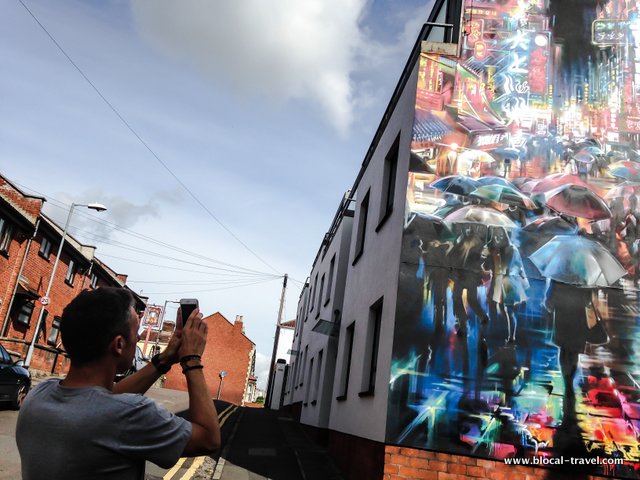 Another positive aspect of his old murals being painted over is that –given the freaking perfectionist he is- Dan always likes his latest wall the most, since his art moves a bit forward with every new piece. 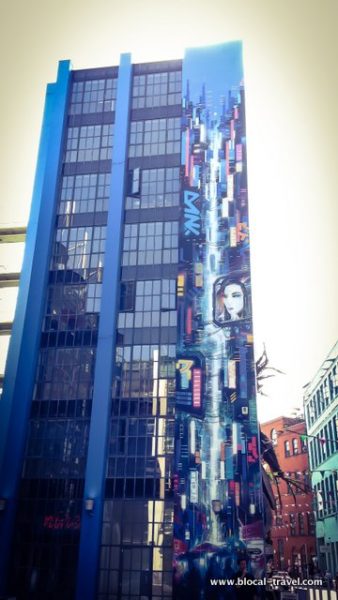 He is quite critical of his work, as in his mind he has a clear picture of how it should look, an atmosphere more than a specific image: the atmosphere he felt when he was in the cities he depicts. 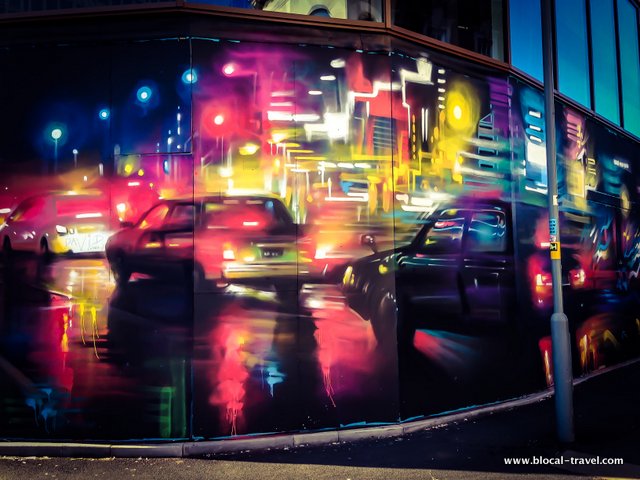 In the mural he painted for Upfest 2016, the actual city is a mix between Tokyo and Hong Kong. There is one of his iconic wet streets with overcrowded neon signs, which most of the time don’t mean anything but texture except in those rare cases when he translates his tag “Dank” into Japanese. 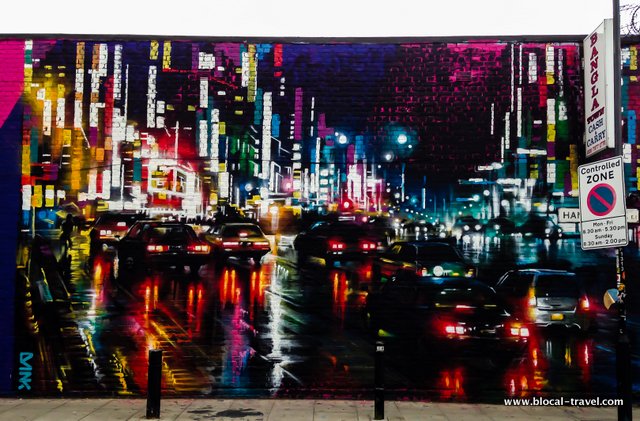 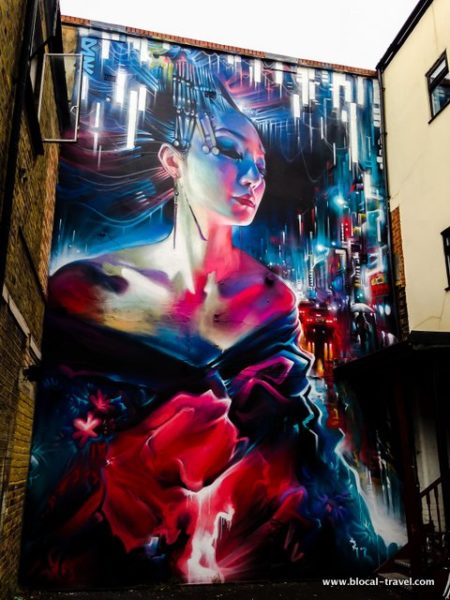 But the point is never just the wet street full of neon signs. And so the structure of his latest mural in Bristol (which is titled “Streets of colours”) was made quickly: the biggest effort came later, when he worked on rendering the right emotion and mood through his iconic depiction of steam, mist, rain, lights, reflections and glows. 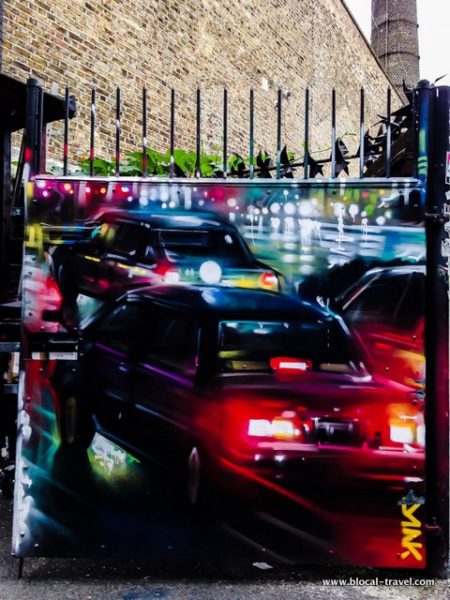 Futuristic looking wet streets glowing with neon colours are what he is famous for, although he also likes to paint sci-fi and fiction themed pieces, which are his way of escaping the boredom of doing the same thing all the time. 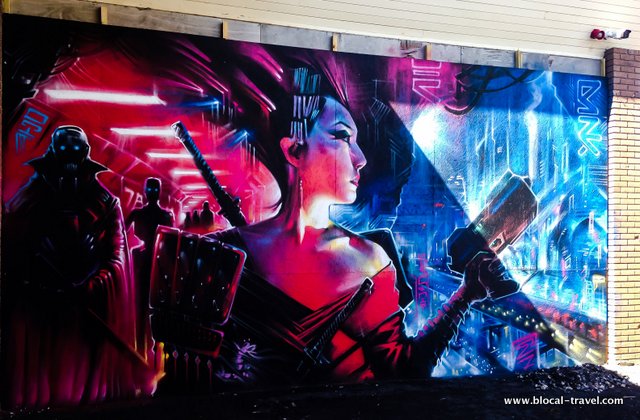 But –perhaps- the job he is most proud of was the collaboration with Paul McCartney, for whom he animated two tracks of his USA tour (“I didn’t meet him, unfortunately, I just got emails from him, but it was still pretty cool”).

Walking back to North Street, it slipped out that I’m from Rome. “I’d love to come and paint there”, he said.

And I just want to let him know that, now that I’m back, I’m working on that.

Thank you Dan for your time! I hope to meet you again, hopefully in Rome ;-) 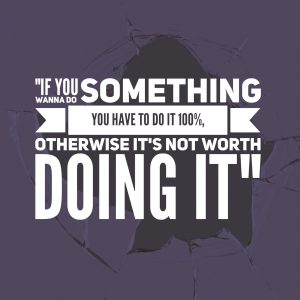 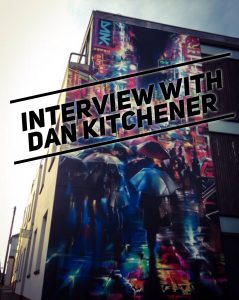 Where to find Banksy street art in Bristol