On when I finally met Sami Wakim, the non-American founder of Street Art United States

I don’t remember why we began chatting online, but I do remember that in Summer 2017, I wanted to join Sami Wakim on his annual trip to his hometown of Beirut. Unfortunately, I couldn’t make it, so I (finally!) met him in the flesh for the first time at Nuart 2019. He was there to interview Lebanese street artist Jad El-Khouri as part of the festival’s excellent program “Nuart Plus”. 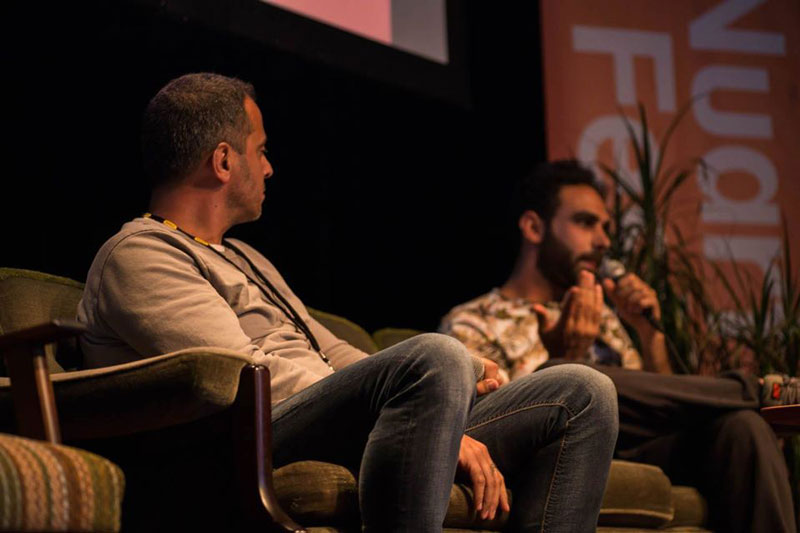 Sami Wakim, Street Art United States: “I do the blog because of my frustration about what’s going on in the world and how these worlds –the West- invade other countries. They just don’t care about people; all they care about is natural resources. I was a victim of that growing up in Lebanon and I see myself in these kids that are growing up now.”

Sami Wakim left Lebanon at the age of 25, after the end of the civil war that affected his country from 1975 to 1990. He first moved to Cote d’Ivoire in West Africa to work in the auto parts business. There, he met an international community of European and American  people that, with their ease of making plans about the future, made him realize how much the war had affected his life.

“In West Africa I started to be more free, more able to do things and be happy. Finally, I could just go out and have a blast.” – Sami Wakim, Street Art United States

It was the first time that Sami felt his youth has been somehow different and that his life-long feeling of “being stuck” didn’t happen to his European and American peers.

“When I would ask my father whether the war was going to end, his reply was always along the lines of ‘This is what we have right now and I don’t know what’s going to happen later.’ He was realistic, and he taught us about patience and the ability of putting on a thick skin.” – Sami Wakim, Street Art United States

Although his personal background might seem unrelated to the blog that Sami started in 2013 (which does have a closely-related name: Street Art United States), for Sami these two things are strictly connected. In fact, he started the blog to raise awareness about social injustice, women rights, homophobia, and to give a voice to the voiceless.

“I’m always picking subjects that are about the people who are paying the price for the sake of the rich, because I was one of them, one of those people living in a war, who didn’t think he might have a future. For me, street art is the medium to tell these stories.” – Sami Wakim, Street Art United States

Sami started his blog in 2013, after having already managed the related Facebook page for a year.

“I was looking for a way to publish interviews and opinion pieces, alongside pretty pictures.” – Sami Wakim, Street Art United States

His first interview was with the Florida-based duo 2Square, which was quickly followed by an interview with French street art legend C215. 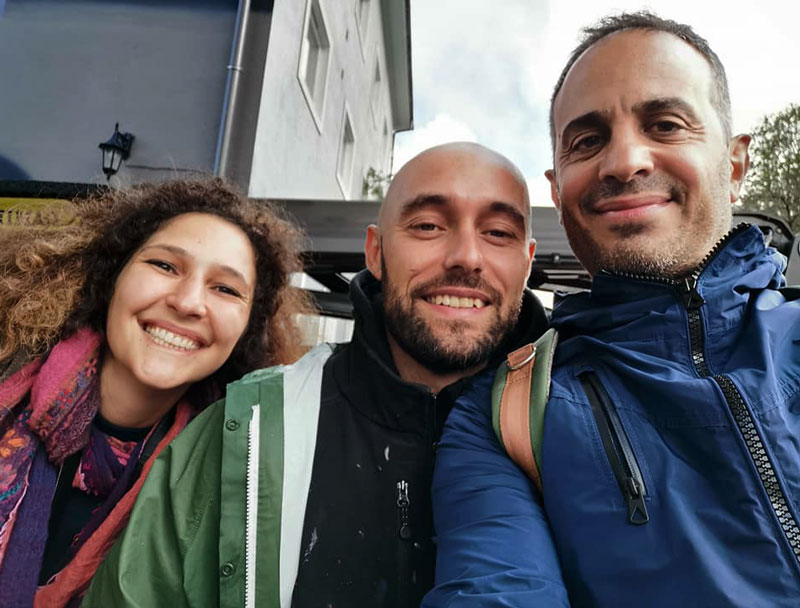 On the cherrypicker with Nuno Viegas – Nuart 2019

“Now I have a team of excellent writers, but I always make sure to explain to them why I picked a certain wall, project, or artist. For me, the focus on the social theme is always very important, even when I leave the actual writing of the article to another writer.” – Sami Wakim, Street Art United States

Although supported by a team of writers, Sami still puts several hours a day into Street Art United States, still focused on the writing.

“I feel like Facebook, Instagram, and all these other social networks got us by the balls: whatever you do, you can’t be free posting about anything. My blog is on social media and I do notice the huge visibility they give to any freshly published article, but I still feel the focus should be on the blog.” – Sami Wakim, Street Art United States 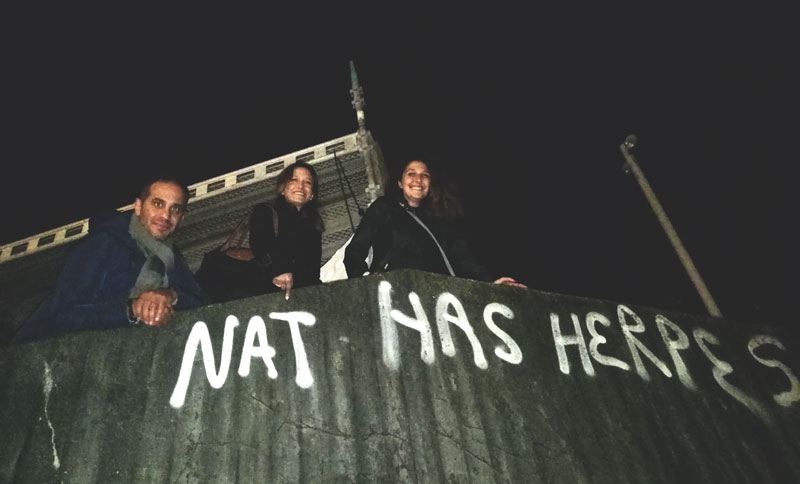 with Fran (Urbanite blog) and Nat, in Stavanger

Personally, I’ve always been impressed by how much of a “people person” Sami is. He seems to know everybody in the scene. He is a very affable person with a ready smile; although it was his first Nuart Festival, he was open and friendly with everybody.

“Even if our blogs are online, I feel it’s important to make a connection offline. It’s very important that people know who you are in person.” – Sami Wakim, Street Art United States

A warm, Southern hearth that clashes with the cold atmosphere of Boston, where he lives now.

“I might be paranoid, but sometimes I feel that people, when they know I’m not American, have this attitude of “Who does he think he is?” I’m Arab. And even the street art scene is ‘cold’ in Boston.” – Sami Wakim, Street Art United States 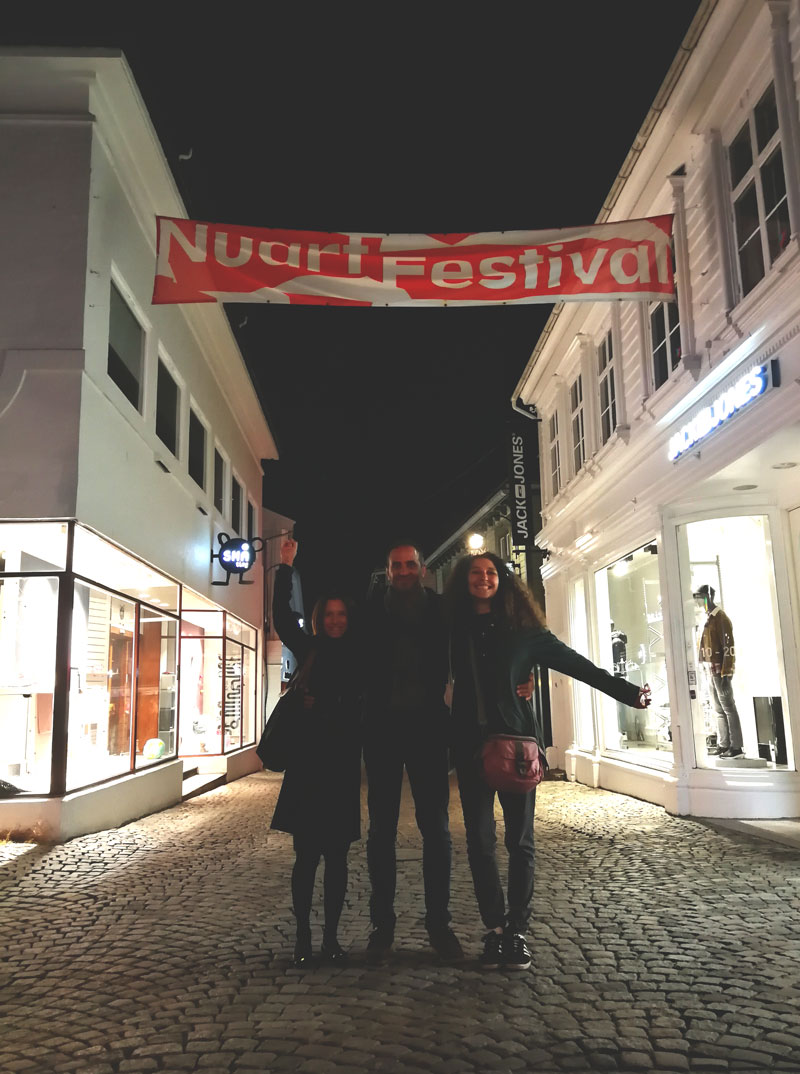 A completely different atmosphere characterizes his hometown of Beirut, whose streets are now overtaken by engaged young artists, among which is our mutual friend Jad El-Khouri.

“Jad is from a younger generation, but he still lives in the shadow of the war. He is one of the few artists in Lebanon that are using the war and reinterpreting it through art. Many other artists in Lebanon just want to emulate the West. They look up to the West so much that they want to look like them, as if they are afraid they aren’t worthy otherwise. They don’t want to look Lebanese. I can relate to that because I was the same way. But now, after living in the West for 17 years, I would like to “shake” those kids, tell them they could use the war to do things, like what Jad is doing. I firmly believe that the situation of our country can be a source of energy and creativity.” – Sami Wakim, Street Art United States

As a side note, I asked Sami about other talents that are emerging from the Lebanese cultural scene.

“There is this band called Mashrou’ Leila. I call them ‘the Radiohead of the Middle East’ because their music is totally different from everything else. Moreover, the singer is openly gay, so they basically go against everything.” – Sami Wakim, Street Art United States

That’s the kind of people that, according to Sami, might pioneer an artistic revolution in Lebanon. And wouldn’t you know it, a couple of months after our chat at the Nuart Festival, the indie band became the soundtrack to the Lebanese protests.

Read more of my interviews with street art bloggers

Newsletters are the new zines. Join up my street art newsletter here

Nico, The Riot Vandals (TRV) and the Golden Age of Graffiti in Rome

Living in Amsterdam #4 – My First Month of Isolation