the making of the SamoReggaeStan festival 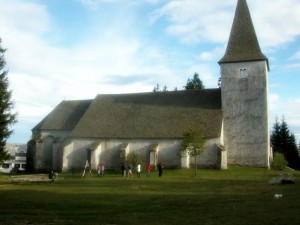 Off the record: before going for my first time to Slovenia, I barely knew (geographically speaking) where I was going. Just after a very busy university year (so busy I didn’t have the time to think about holidays, let alone to apply for a summer job abroad!) at the very end of July I found myself wondering about what to do; that’s when I sent some emails to several reggae festivals all around Europe (it was supposed to be a holiday, after all!) and got a reply from the SamoReggaeStan Festival.
Little did I know, that barely known place so called Slovenia would eventually break deep-down into my life for the following couple of years! But that’s another story, let’s go back to my first trip to Slovenia, to the amusement which I felt at first walked through Ljubljana, to the astonishment which I had at first crossed the Slovenian wood by train, to the excitement which I had at first met my new Slovenian friends.
As in the movie “the Holiday” (which, by the way, made me actually decide to leave), this break was exactly what I needed. Tucked away into Rogla mountain, for the first couple of weeks I helped setting up the fences and all festival infrastructures (i.e. men were setting up fences and infrastructures, while I was bringing around the wire –“drot” in the Slovenian dialect of that region, which soon became my Slovenian nickname) and “supervising” men’s work. Then the last week, when the festival begun, I was greeting the guests and assisting the artists, thus the festival became also an occasion to discover and meet many talented bands from all over Europe, some of which I already knew and I was particularly amazed to meet in the flesh (such as Paolo from Africa Unite and a reggae legend: Macka B)
Setting up the festival I met the most relaxed, easygoing and lovely people and, even if my first Slovenian experience lasted less than one month, it really enlightened my life. The minimalism of the day schedule (working during the day and setting up bonfire parties during the night) and the overall simplicity which characterized those days (of the people, of the place, of the experience and of life itself) really restored me and I came back to my ultra-busy university life in Bologna firmly convinced that I actually belonged to Slovenia and that I needed to move there as soon as possible; but, again, that’s another story…

Hi! I am Giulia and I blog about unconventional destinations, abandoned places, street art, outskirts, urban landscapes, weird spots and basically all the places I happen to visit and become very enthusiastic about.

The Very Best of Madrid

The streets are fields that never die: The...

On the Road Film Festival at Cinema Detour...

On The Road Film Festival at Cinema Detour...